Fumbling, but ball not dropped 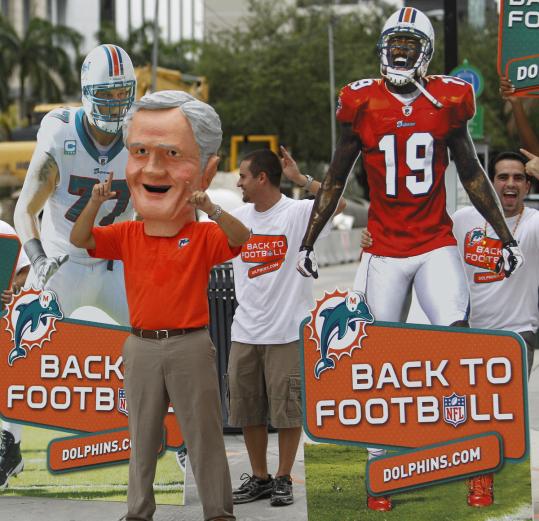 Employees and volunteers for the Dolphins, including one dressed as ex-coach Don Shula, celebrate the end of the lockout. (J Pat Carter/Associated Press)
By Bob Ryan Globe Columnist / July 26, 2011

To borrow a phrase from another sport, no harm, no foul.

Football fans of the world, what did you miss? It was the perfect pro sports lockout (to call it a work stoppage would be to imply the players were in any way complicit), beginning when the last season ended and ending with the loss of just one extraneous game, the Hall of Fame affair. The teams now can write appropriate checks to the Hall for the lost revenue from that canceled game, and life can go on. It’s not as if anyone needed to watch the Rams and Bears put on a glorified scrimmage Aug. 7, anyway.

Other than that, what did we miss? If you are an exclusionary NFL junkie, not interested in anything else happening in the world of sport, and thus you really needed OTAs and such to get you through May and June, you need more help than is probably available. The rest of us, who enjoy football as part of our 12-month sports smorgasbord, missed a little free agency talk but nothing else. We have survived very nicely.

And did anyone really think it wouldn’t get done in proper time; i.e. before the owners lost revenue and the players missed a paycheck? Nope, not when the nut we always were talking about was $9 billion, and that’s b-b-b-billion with a B. That is enough of a financial pie for everyone to snack on.

This thing had a little bit of interest as a spectator sport. In contrast to the previous collective bargaining agreement, this one was to be negotiated with a different commissioner and a different union head, each needing to make a good showing to impress his constituency. There was real pressure on Roger Goodell and his negotiating team, because in DeMaurice Smith he was facing a new union chief who was of the opinion that his predecessor had been a bit too chummy with Goodell’s predecessor, Paul Tagliabue.

Yet it was the owners, not the players, who had expressed profound dissatisfaction with the CBA, opting out at the earliest possible moment, and thus setting in motion the forces that brought about this annoying lockout. The players never wanted anything more than a preservation of the status quo, with perhaps a few gentle tweaks here or there. The owners wanted to blowtorch the whole thing.

As for the details, you can read them elsewhere in these pages. Neither side is completely happy, which experts in the field of negotiation say is the sign of a fair agreement. But if anyone is to wind up with a feeling of buyer’s remorse I’m betting that this time it will be the players, who appear to have been railroaded and intimidated into a hasty 11th-hour agreement geared to get the camps open and the exhibition games back on track.

Never make the mistake of thinking the owners actually believe there is a true partnership between themselves and the players. The owners are very rich individuals used to getting their way. And while there may be some legitimate one-on-one relationships between specific owners and specific players, most owners, and most coaches, regard most players as highly replaceable commodities.

This is true in all sports, but is most true in football, in which debilitating injury is not just anticipated, but expected, and thus there is an innate callousness with regard to contract protection.

The sport that most needs guaranteed contracts is practically devoid of them. Compared with contracts in other sports, football’s are a joke. It doesn’t matter if a guy is reported to have signed for 150 years at $7 trillion, if they decide to cut him, he probably gets nothing, or very little. None of that has changed with this new CBA.

But we are coming back to a different football world than we ever could have envisioned just a few years ago. There is, at last, honest concussion awareness, although in the end it will vary from coach to coach just how seriously this will be taken. There is a more honest concern for the preservation of bodies, if only because it makes good business sense. Players, after all, are their inventory.

Eliminating preseason two-a-days and placing a limitation on practicing in pads during the season would have been unimaginable in Ye Olde Lombardi Days, when punishing players in summer heat was both a rite of passage and a reminder of just who was boss.

Then again, in those days players seldom reported in shape. All sports now consist of only two phases, when games are being played and when games are not being played. Staying in year-round shape is now in a player’s job description.

Patriots owner Robert Kraft declared at the Super Bowl that an inability to reach an agreement on a new CBA would have been “criminal.’’ That might have been a bit hyperbolic, but it surely would have been foolish. The NFL is like a runaway growth stock, one that grows in value every year.

We can, and should, debate the ethics and morality of the sport we have chosen as our favorite, but there is no doubt that America has spoken regarding the NFL. Sunday afternoon football, Sunday night football, Monday night football, and now Thursday night football are all part of the rhythm of entertainment in America from August through early February. Withholding football from America for any length of time would have plunged this country into mass depression.

It would have been bad business, too.

And now we will have it, all of it. The deadline was met.

We can only hope Congress will take the cue.