Herzlich understands why he was passed over 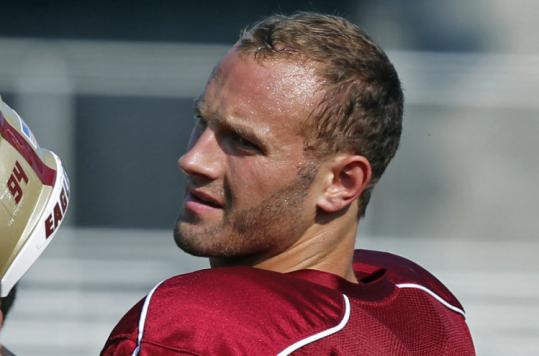 The television cameras were nowhere in the vicinity. The bright lights and big city atmosphere of the three-day NFL draft were 150 miles away in New York City.

It wasn’t supposed to be this way for Boston College’s Mark Herzlich.

The next level of his football career was supposed to be as a high first-round draft pick. At least that was the way it appeared it was going following Herzlich’s junior season as he pondered whether to declare himself for the draft after three seasons with the Eagles, each one better than the one before.

That was before a well-documented recovery, which included chemotherapy treatment and the insertion of a steel rod to replace and reinforce the cancerous bone the surgeons worked on when they removed the tumor. That was before he started all 13 games for the 2010 Eagles.

And that was before a series of workouts for the unemotional evaluation of NFL scouts that showed that Herzlich had lost a step or two from a couple of years ago and was no longer a first-round pick. Not even a second- or third-round pick. He was a marginal prospect at best.

And when Herzlich timed a tick slower — 4.96 seconds from 4.92 — in his workout at BC in March, the scouts left with even more doubts.

All of which was why Herzlich was not at home yesterday waiting to hear his name called, but in Providence watching younger brother Brad play in Brown University’s spring football game.

“When it happens, if it happens, they’ll call me,’’ said Herzlich yesterday morning before the business of selecting players began for the day. “I’m not confused by what happened [to his draft status]. I understand it completely. I know where I would have been picked if I were healthy. The big thing is for me to get to an NFL camp and prove myself. I would have to do that anyway. It doesn’t matter.’’

The call never came, and with the NFL lockout back on, Herzlich will have to wait for his chance to play at the next level.

“I am very disappointed,’’ said Herzlich last night after a long day of waiting. “And got more frustrated as the day went on.’’

BC coach Frank Spaziani said that Herzlich’s return last season was “miraculous’’ and that he regarded a Herzlich move to the NFL in the same category.

“You have to understand that when the diagnosis with Mark [occurred], all the doctors were talking about was about just surviving,’’ said Spaziani. “Playing football wasn’t an issue. The doctors were trying to find ways of saving his life. Mark was the one who kept on pushing football. For him to be still playing is miraculous. And in the NFL? That’s off the charts.’’

While Herzlich was watching spring football, the NFL worked its way through the final four rounds of the draft.

“I guess people are saying I can’t play football anymore,’’ said Herzlich, already preparing himself for his next battle. “Well I have heard that before and look what happened.’’’

While Herzlich was bypassed, five players from New England schools were picked yesterday, four of them from UConn.

Fullback Anthony Sherman was the first Husky picked. Sherman, a two-time captain who went to North Attleboro High, was selected by the Cardinals with the fifth pick of the fifth round (136th overall).

“I am excited for the opportunity to go out there and compete for a starting job and be on a great team that can compete for a championship,’’ said Sherman in a conference call yesterday.

Running back Jordan Todman lasted until the middle of the sixth round when he was selected with the 183d pick by the Chargers.

Todman, who passed on his senior season after helping the Huskies win a share of the Big East title and a spot in the Fiesta Bowl, said he had no regrets about his decision.

“I feel like it is a great team and a great organization,’’ he said. “We have some good offensive threats and the defense is also good. It is an opportunity to make my dream come true. I have wanted to be in the NFL since I was 8 years old and now I am here. I don’t have anything to complain about.’’

Two more Huskies were chosen yesterday, linebackers Lawrence Wilson by the Panthers with the first pick of the sixth round (166th overall) and Greg Lloyd in the seventh round by the Eagles (237th overall).

Yale running back Shane Bannon was selected by the Chiefs with their seventh-round pick (223d overall).