THIS STORY HAS BEEN FORMATTED FOR EASY PRINTING
DEFENSIVE LINEMEN

They should fall right in line 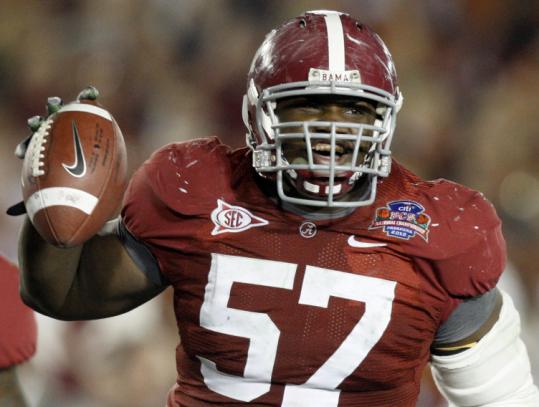 Alabama’s Marcell Dareus soon will be helping out an NFL team — and his own family — as he starts his pro career. (2010 File/Chris Carlson/Associated Press)
By Shalise Manza Young Globe Staff / April 22, 2011

One admires Warren Sapp; the other, the late Reggie White. Not bad football role models to have.

If, in trying to emulate the playing styles of Sapp and White, Marcell Dareus and Nick Fairley wind up having similar careers as well, two teams will be very happy.

Dareus, of Alabama, and Fairley, of Auburn, are considered not just the two best defensive linemen — in a deep pool at the position — but also among the 10 best players at any position in this NFL draft.

Before it became common among draft cognoscenti to predict that the Panthers will take Fairley’s teammate, quarterback Cam Newton, with the No. 1 overall pick, both were considered possibilities for the top selection.

Whether either winds up with the Panthers, Broncos, or another of the teams picking at the top of the draft remains to be seen. But the potential is there for either to become the type of disruptive force in the trenches that rookie Ndamukong Suh was for Detroit last year.

Both are classified as defensive tackles, but could play end in a 3-4 system.

“It would be a good advantage for me because I’m used to it,’’ Dareus said of being taken by a team that uses a three-man front. “I’ve been running it for a little while and I think I’m pretty good at it.

“At ’Bama, we played a little four-man, three-man, we did a lot of rotating. I’ve played three-technique, defensive end, nose — a little bit of everything.’’

Dareus played at Alabama for Nick Saban, who spent three years as a member of Bill Belichick’s defensive staff in Cleveland, and certainly understands what kind of player it takes to play on a three-man line in the NFL.

A Birmingham native, Dareus is the sixth of seven children, and it isn’t a cliché that he’s leaving school early to help his family. His father, Jules, died when he was 6. The grandmother that helped raise him died when he was 13. His mother, who raised seven children largely on her own, spent much of Dareus’s high school years in a wheelchair because of congestive heart problems. She died last May.

“My mom, she struggled with all seven of us,’’ said Dareus. “She did the best she could. She was the head of my house. She had to make us boys be men and learn to take care of our family and be productive in our community.

“We’re all struggling in certain ways. It will be a big benefit to help my brothers and sister to the point we can do something in life.’’

Dareus began playing football when he was in fifth grade, after some coaches noticed the oversized boy on the swings in the neighborhood park. He took a liking to the sport — he has played nothing but defensive line — and after watching Sapp play, he set his mind on playing like the former Buccaneer and Raider tackle who amassed nearly 100 sacks in his career.

Sapp, now an analyst on NFL Network, called Dareus the best three-technique lineman in the draft, which brought a smile to the face of the 6-foot-3 1/4-inch, 319-pounder. Lauded for his easygoing nature, about the only knock on Dareus was the two-game suspension he received from the NCAA last fall for rules violations; he was at a Miami party financed by agents.

Happy that his penalty had been reduced to two games after the NCAA originally suspended him for the season, Dareus sat out and promised his teammates they’d get his all when he returned. He kept his word, finishing the season despite suffering an ankle injury in his second game back.

“If you watch Dareus play two years ago, his film is even better than it was this year,’’ said former NFL head coach Jon Gruden. “He got hurt in the Arkansas game; that ankle lingered through the season.

“Dareus is a three-position player in a 3-4 front. He can play nose, either defensive end. He is legitimate, sheer power. This is a power player. He is rare.’’

Fairley got onto everyone’s radar in January’s BCS title game, when he was a one-man wrecking crew against Oregon. He had five tackles, three of them for losses and one a sack; he also forced a fumble.

But while his 2010 numbers — 24 tackles for loss, 11 1/2 sacks — are impressive, the stark change in production between his first year with the Tigers and his second (he played two years at a junior college) have led many to wonder whether he is a flash in the pan or last fall was the start of something big.

For his part, Fairley says that after dominating at the junior college level, he wasn’t ready for the rigors of the Southeastern Conference. He also credits former Auburn tackle Tracy Rocker with helping his development.

“Just by him playing in the trenches and knowing what it takes to play down there, everything that came out of Coach Rocker’s mouth my two years with him, I took it to heart and tried to use it in my game,’’ he said.

But ESPN analyst Mel Kiper referred to him as a one-year wonder, and Pro Football Weekly draft analyst Nolan Nawrocki wrote the same thing. Gruden acknowledges that he’s had just one standout season, but said many of Fairley’s sacks were “not by accident’’ and believes he’s a player on the rise.

There’s another knock on the 6-4, 291-pound native of Mobile, Ala., however: He has been accused of taking plays off and playing down to his competition.

“I think I play the game the way it should be played,’’ Fairley said. “I play with a high motor. I hit a light switch once I hit the field and I don’t hit it off till I leave the field.’’

Fairley has quick feet for a man his size, thanks to a basketball background, and is an explosive tackler. He may be more of a true tackle in a four-man line.

As to which player is better, each showed respect to the other at the NFL Combine.

The next Warren Sapp and Reggie White, as they’d like to be, will be able to show who is better when they suit up in the NFL.