Teams, players agree to get help 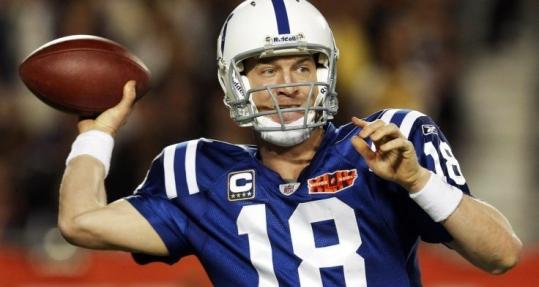 According to Colts owner Jim Irsay, quarterback Peyton Manning is on target for the richest contract in NFL history. (File/Mike Segar/Reuters)
Staff And Wire Reports / February 18, 2011

Two weeks before a potential lockout, the NFL and its players’ union are asking for help in their stalled negotiations.

The sides agreed yesterday to mediation as they discuss a new collective bargaining agreement. The Federal Mediation and Conciliation Service, an independent US government agency, will oversee talks in Washington beginning today.

After holding separate discussions with representatives from the league and the union, FMCS director George H. Cohen said both sides agreed to have the agency mediate. Mediation is not binding.

“Any time that both sides of negotiations can get together, whether through conventional means of bargaining or mediation, to come to an agreement that can benefit all parties, it is a good thing,’’ NFLPA president Kevin Mawae told the Associated Press.

Negotiations broke down last week, leading to the cancellation of one planned session. The players are expecting the owners to lock them out if the CBA expires March 3 without a new agreement.

The league also switched an owners meeting from Fort Lauderdale, Fla., on March 3, to Chantilly, Va., on March 2-3.

Cohen said in a statement that the negotiations will be conducted “under my auspices.’’ He is no stranger to sports mediation. He was involved in Major League Soccer talks with its players’ union and a work stoppage was avoided last year.

Cohen also has worked with the players’ associations for Major League Baseball, helping end the 1994-95 strike as a consulting attorney, and the NBA, and was an adviser to the NHL players’ union before joining the FMCS.

News of mediation could be a positive sign after several months of infrequent negotiations. It also comes only days after the NFL filed an unfair labor practice charge against the NFLPA with the National Labor Relations Board. Monday’s filing said the union “consistently has failed to confer in good faith’’ during negotiations for a new contract and the union’s “conduct amounts to surface bargaining and an anticipatory refusal to bargain.’’

More for Manning Colts owner Jim Irsay, at a hastily called news conference, said he expects quarterback Peyton Manning to sign a record-setting deal before next season. Tom Brady currently holds the distinction for the highest annual average salary after agreeing to a four-year deal worth $18 million per year in September.

Manning’s deal will not only be richer, but longer.

“I think six years is certainly a possibility, five or six years,’’ Irsay said. “There’s not a definitive number that I’m stuck on. You don’t know how much longer he can play. You hope that it’s five years, maybe six years. Until you get longer down the road, it’s really uncertain.’’

Irsay’s comments came two days after Indianapolis used the exclusive franchise tag to keep the only four-time MVP in league history off the market. Manning, who turns 35 next month, will not be allowed to negotiate with other teams. If he plays under the tag next season, Manning would make about $23 million.

For more than a year, Irsay promised to make Manning the highest-paid player in league history. Apparently, Manning’s agent, Tom Condon, now has the proof.

“The contracts out there have been compared and Brady and him have been sort of tied at the hip,’’ Irsay said. “I’ve made an offer higher than that contract.’’

Irsay said negotiations were “going well’’ and reminded fans he took a similar tack in 2004 — giving Manning the exclusive franchise tag — before signing him to a seven-year, $98 million deal in March. Indianapolis then rescinded the designation.

The Patriots moved two coaches to new positions and added another to the staff. Brian Ferentz, in his fourth year with the team, will move from being an offensive assistant to the tight ends coach, and Harold Nash, the assistant strength and conditioning coach the last six seasons, was promoted to the head job. George Godsey, who spent the last seven years at Central Florida, was named an offensive assistant coach . . . The Titans hired former Texans defensive coordinator Frank Bush as their linebackers coach with Dave McGinnis, the former Cardinals head coach, moving to a new spot as senior assistant coach . . . John Elway, the Broncos’ chief of football operations, said in a series of tweets that the team is trying to re-sign perennial Pro Bowl cornerback Champ Bailey four months after it withdrew an extension he was about to sign. The Broncos are not planning to use their franchise tag on Bailey because that would cost them about $15 million in guaranteed salary next season. If they don’t sign him to a new deal, Bailey would become an unrestricted free agent when a new collective bargaining agreement is hashed out. Bailey just completed his seven-year, $63 million contract with a 10th Pro Bowl berth, a record for cornerbacks.