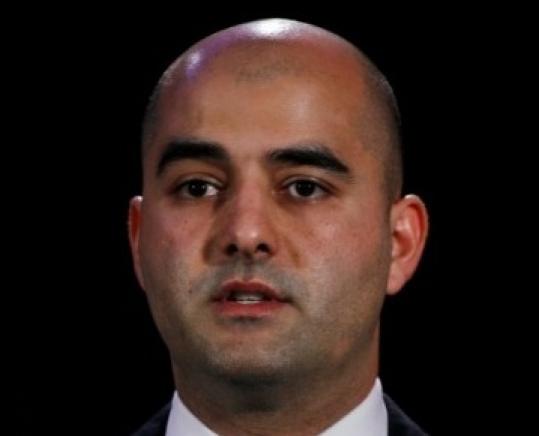 Negotiations to prevent an NFL lockout took a grim turn yesterday with the cancellation of the second day of a planned two-day bargaining session.

“We wish we were negotiating today,’’ NFL Players Association spokesman George Atallah said. “That’s all I can say.’’

There are just three weeks to go before the collective bargaining agreement expires March 3.

The NFL confirmed that commissioner Roger Goodell has canceled an owners’ meeting scheduled for Tuesday in Philadelphia, where labor was expected to be a topic.

“Despite the inaccurate characterizations of [Wednesday’s] meeting, out of respect to the collective bargaining process and our negotiating partner, we are going to continue to conduct negotiations with the union in private,’’ league spokesman Greg Aiello told the Associated Press via e-mail, “and not engage in a point-counterpoint on the specifics of either side’s proposals or the meeting process. Instead, we will work as hard as possible to reach a fair agreement by March 4. We are fully focused on that goal.’’

The collapse of the talks came as a surprise. The two sides got together Wednesday in Washington for the second time in five days, the previous negotiations taking place in Dallas on Saturday before the Super Bowl. Neither Atallah nor NFLPA executive director DeMaurice Smith would comment on why yesterday’s session was called off.

The union sent a memo yesterday to player agents updating the status of discussions on a rookie wage scale. A union proposal to decrease the maximum length of rookie contracts to four years for players selected in the first three rounds, and three years for players chosen after that, also included a limit on financial incentives and salary escalators that could be included in rookie deals.

Those limits would, the NFLPA claims, provide the cost certainty the league is seeking for its rookie salary pool.

According to the memo, the NFL’s response was a five-year wage scale with base salary escalators. That would virtually eliminate individual negotiation of rookie contracts.

Owners opted out of the current CBA in 2008 and are seeking a bigger cut of the league’s revenues, which are roughly $9 billion, as well as the rookie wage scale. They also want to increase the regular season by two games to 18, while dropping two exhibition games.

The players are happy with the status quo.

The NFL has had labor peace since a 1987 players’ strike that led to three games with replacement players, but some sort of labor stoppage appears a genuine possibility this year because of the slow pace of negotiations. The talks at the Super Bowl were the first formal discussions since November.

Metrodome makeover The landlords of the Metrodome in Minneapolis voted unanimously to replace the snow-damaged roof of the venerable stadium, opting for a more time-consuming fix that could disrupt the Vikings preseason schedule. The Metropolitan Sports Facilities Commission approved a recommendation from engineers who said they worried that simply repairing several torn panels of the stadium’s Teflon roof wouldn’t be enough to prevent another failure. Commissioners said they hoped the job would be done by Aug. 1 at an estimated cost of $18.3 million, with almost all of it expected to be covered by insurance. The NFL’s preseason schedule hasn’t been released, but the typical mid-August start could be affected if the roof work takes longer than the commission hopes. The roof collapsed in the early morning hours of Dec. 13 at the tail end of a snowstorm that pounded the region for about 24 hours straight. TV cameras stationed on the field captured footage of the roof giving way and snow pouring onto the field. It was the fourth time in the Metrodome’s nearly 30-year history that heavy snow had caused the roof to fail, but the most recent collapse was 27 years ago. Metrodome officials initially hoped to get the tears repaired quickly, but difficult weather conditions made the job dangerous and ultimately forced the Vikings to move their last two home games of the season.

Thomas tears Achilles’ The Broncos receiver corps has taken another hit with word that last year’s top pick, Demaryius Thomas, tore his Achilles’ tendon in an offseason workout in Atlanta. Thomas, the first receiver selected in the 2010 draft, was working out at his offseason home when he was injured. He’s expected to be out 6-8 months. Last week, slot receiver Eddie Royal had hip surgery that could sideline him for up to six months, although the Broncos are hopeful he’ll be back by late May . . . The NFL says about 2,000 fans forced to sit in temporary seats at the Super Bowl will receive a face-value ticket refund or a free ticket to a future Super Bowl. This is the latest plan to appease fans delayed in gaining pregame access to their seats because of unsafe conditions for temporary seats at Cowboys Stadium. The plan released yesterday is separate from the one announced Tuesday by Goodell for the 400 fans who were denied seats.