THIS STORY HAS BEEN FORMATTED FOR EASY PRINTING
Super Bowl Notebook 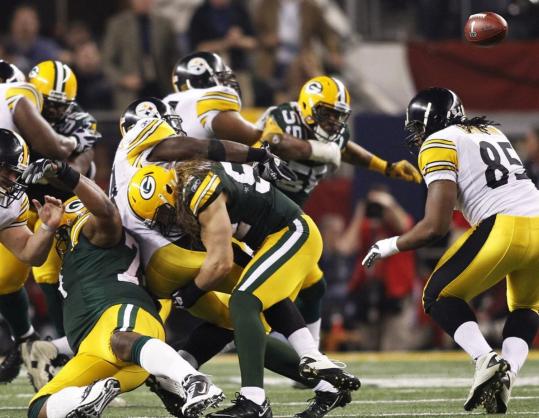 ARLINGTON, Texas — There was a sense of familiarity for the Steelers as they took the field for their final possession of last night’s game.

Two years earlier, in Super Bowl XLIII against Arizona, they took the field with 2:37 left, at their 22-yard line with one timeout remaining. That night, Ben Roethlisberger and Santonio Holmes linked up for a 6-yard touchdown pass for the ages to win the game in the final minute, as Holmes somehow glued his tip-toes to the grass at Raymond James Stadium in Tampa.

Last night at Cowboys Stadium, Pittsburgh — sans Holmes, but with Roethlisberger — took over with 2:07 to play, at its 13 with one timeout remaining.

This time there would be no storybook ending.

Roethlisberger huddled up his offense at the start of the drive.

“[I told them] ‘I believe in you guys and we can do this,’ ’’ he said. “I think we all really felt like we could . . . You always have hope and belief in each other and in yourself that you can get it done.’’

On the first play, Roethlisberger hit tight end Heath Miller with a 15-yard pass, sending the Terrible Towel-waving fans in attendance into a frenzy. Then he went to his Mr. Reliable, Hines Ward, for a 5-yard gain. So far, so good.

But then he threw the ball away on second down when he was flushed out of the pocket and couldn’t find anyone open, and threw incomplete deep to Mike Wallace on third down from the Steelers’ 33.

Roethlisberger looked to Wallace again on fourth down, and the ball was knocked away by Jarrett Bush.

“I was like, ‘Here we go again,’ but it didn’t happen,’’ Pittsburgh offensive coordinator Bruce Arians said. “We were scrambling a little bit because we lost [rookie receiver] Emmanuel [Sanders]. Guys were in a little bit different positions and we lost a little bit of time to set up.’’

“I thought it was going to be one of those magical moments,’’ Ward said. “We felt like whoever had the ball last was going to win the game. We just fell short.

Roethlisberger, who won his first two Super Bowl starts, felt he let a lot of people down with his performance and not being able to pull out the win.

Turning points Packers linebacker Clay Matthews, who finished second in Defensive Player of the Year voting, came up with a couple of nice plays to give the Packers opportunities.

Matthews and Ryan Pickett swarmed Steelers running back Rashard Mendenhall and forced a fumble that Desmond Bishop recovered to start the fourth quarter.

It was one of three turnovers the Packers turned into points as Green Bay moved 55 yards on eight plays, a drive that was capped with an 8-yard touchdown pass from Aaron Rodgers to Greg Jennings that produced a 28-17 lead.

Safety Nick Collins’s 37-yard interception return in the first quarter was the third defensive touchdown of the postseason for the Packers. The playoff record is four by the 2002 Buccaneers.

Adams returns Steelers right tackle Flozell Adams played in his first Super Bowl 13 years into his career, he did it in the city where he played the first dozen seasons. Adams was released by the Cowboys last spring and signed with the Steelers during training camp after Willie Colon was lost to a season-ending injury.

But the experience was bittersweet.

“It hurts of course; we didn’t come out with a win,’’ Adams said. “[But] playing all the seasons I have, you have to keep perspective on things. Even though we lost today, it was still a great season. We made it here, but unfortunately we lost. We tried the best we could but we didn’t get the win today.’’

New heights Former Boston College standout B.J. Raji can now call himself a Super Bowl champion. The defensive tackle was credited with one quarterback hurry, and Raji said the Packers were able to pressure Roethlisberger into tough throws.

“We got some good hits on him, but he made some good throws,’’ Raji said. “He’s a great quarterback, he’s going to do that. But for the most part, I think we got [to] him and got good pressure.’’

Obstructed view Super Bowl XLV got off to a bad start for a few hundred fans at Cowboys Stadium.

Four areas of auxiliary seats were not ready before kickoff, prompting the NFL to redirect some to a viewing area outside of the stadium and refund fans three times their ticket value.

Approximately 1,250 fans were affected, according to the NFL. Of that group, 850 were placed in similar or better seats, while the other 400 were invited inside to watch the game on monitors. They also had the option of viewing the game from standing-room platforms in each corner of the stadium.

The league blamed the inconvenience on an “incomplete installation of temporary seats in a limited number of sections [that] made the seats unusable.’’ Two of the affected sections were on the Packers’ side of the stadium and were covered by a black tarp. The other two sections were on the Steelers’ side.

The 400 fans who were not accommodated will receive three times the face value of their $800 ticket. The compensation does not cover travel costs or the inconvenience for the fans who did not find out about the circumstances until they arrived at the stadium three hours before game time.

“The safety of fans attending the Super Bowl was paramount in making the decision and the NFL, Dallas Cowboys, and City of Arlington officials are in agreement with the resolution,’’ the NFL said in a statement. “We regret the situation and inconvenience that it may have caused. We will conduct a full review of this matter.’’

Hurting the cause While the Packers dealt with some key injuries to their secondary (Charles Woodson, Sam Shields, Collins), the Steelers had some injury issues on offense.

Sanders left after making a 13-yard catch early in the second quarter. He was taken off the field on a cart. Adams injured his shoulder in the opening quarter when teammate Chris Kemoeatu slammed into his back during Collins’s fumble return, and was replaced by Trai Essex for a few plays before returning to start the second quarter.

Cornerback Bryant McFadden injured a hip in the first quarter, but was able to return.

Off tune While performing the national anthem before the game, pop star Christina Aguilera flubbed a line, setting social networks abuzz with chatter. “I can only hope that everyone could feel my love for this country and that the true spirit of its anthem still came through,’’ she said in a statement . . . The official attendance for the game was 103,219, shy of the Super Bowl record of 103,985 set in 1980 at the Rose Bowl . . . The NFC team won the coin toss for the 14th consecutive year . . . Packers defensive end Jarius Wynn began yesterday celebrating the birth of his son, and ended it celebrating a title. He said before the game if the Packers won, he would consider giving his son the middle name “Super’’ . . . The Steelers’ Doug Legursky got his first NFL start at center as he filled in for rookie Maurkice Pouncey, who was placed on injured reserve because of an ankle injury. Legursky made four starts at right guard this season . . . The Steelers’ inactives were running back Jonathan Dwyer, cornerback Crezdon Butler, tackle Chris Scott, defensive tackle Steve McLendon, offensive lineman Dorian Brooks, defensive end Aaron Smith, and linebacker Jason Worilds . . . The Packers made one change to their lineup by starting Frank Zombo at outside linebacker in place of Erik Walden, who was inactive with an ankle injury .. . Other Packer inactives were running back Dimitri Nance, cornerback Brandon Underwood, cornerback Josh Gordy, fullback Quinn Johnson, and offensive linemen Evan Dietrich-Smith and Nick McDonald.