THIS STORY HAS BEEN FORMATTED FOR EASY PRINTING
Packers 31, Steelers 25 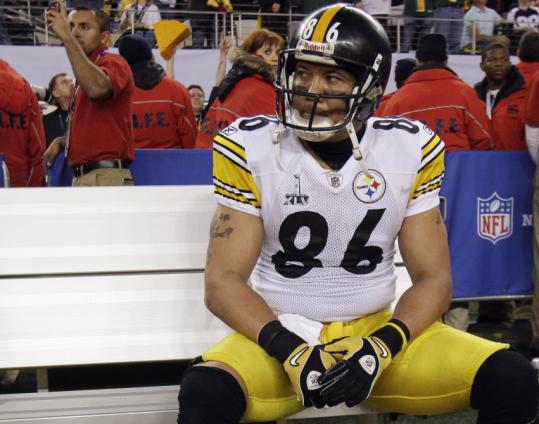 As the clock ticks down in the fourth quarter, former Super Bowl MVP Hines Ward of the Steelers knows he’s on the losing side this time. (Chris O’Meara/Associated Press)
By Shalise Manza Young Globe Staff / February 7, 2011

ARLINGTON, Texas — Overcoming myriad injuries during the season and during the game, the Green Bay Packers won the Super Bowl, 31-25, last night over the Pittsburgh Steelers at Cowboys Stadium.

It was the fourth Super Bowl win (first since the 1996 season) and 13th NFL title for the storied franchise in the smallest market in the NFL, the team that fans can own a piece of in the hamlet that can once again boast its status as Titletown.

In the process, Packers quarterback Aaron Rodgers once and for all stepped out of the shadow of Brett Favre, who won as many championships in all his years with Green Bay — one — as Rodgers now has.

And Rodgers, unlike Favre, was named most valuable player.

Though this marked just his third season as the Packers’ starter — Green Bay traded Favre to the Jets before the 2008 season to give Rodgers, drafted three years earlier, his chance — Rodgers already was considered an elite talent by most observers.

Others, though, noted that he hadn’t led Green Bay to a postseason win in his first two years as the main man. That has now changed. As the NFC’s sixth seed, the Packers had to record four victories to claim the championship.

“Before the presentation of the trophy I said to him, ‘Man, I wish you could win one playoff game for us,’ ’’ receiver Greg Jennings said with a smile. “He followed a legend. But he’s not Brett Favre. He’s Aaron Rodgers. He’s going to do things his way. He’s special.’’

Rodgers, who overcame a number of drops by his receivers but still finished 24 of 39 for 304 yards, three touchdowns, and no interceptions, was never impacted by the legacy of Favre.

“I’ve never felt like there’s been a monkey on my back. The organization stood behind me, believed in me,’’ he said. “That’s what I did on the podium [during the trophy and MVP ceremony], I thanked Ted [Thompson, general manager] and Mark [Murphy, team president] and Mike [McCarthy, head coach] really for believing in me and giving me an opportunity.

“I told Ted back in 2005 he wouldn’t be sorry with this pick. I told him in ’08 I was going to repay their trust and get us this opportunity.’’

McCarthy, who had his players meet with a ring fitter a week before the game as an incentive, put the game on his quarterback’s shoulders, and he delivered.

The 27-year-old Rodgers’s completion percentage was down thanks to those drops, but when it mattered most, his receivers pulled in the pinpoint passes Rodgers threw their way.

On Green Bay’s final scoring drive, Rodgers was sacked on the first play by Ziggy Hood, but then completed 5 of 6 passes as the Packers drove to the Steelers’ 5-yard line.

A missed third-down pass to Jordy Nelson in the end zone left them with fourth down, but rather than gamble, the conservative McCarthy instead took the short field goal from Mason Crosby.

Rodgers and the offense got the ball back with 49 seconds to play, he took a knee twice, and the Vince Lombardi Trophy was back in the hands of the franchise he coached to the first two Super Bowl titles.

Driver did not play after suffering a high ankle sprain in the second quarter. X-rays were negative, but team doctors would not let Driver return, and he was in a walking boot after the game.

Pittsburgh, which was looking for its record seventh Super Bowl victory and third since 2006, made things interesting, coming back from an early 18-point deficit to close within 3 with 7:40 to play on a conversion rush by Antwaan Randle El.

But in the end, the Steelers couldn’t overcome three turnovers, which led to 21 points for Green Bay.

Green Bay twice picked off Ben Roethlisberger in the first half, the first being returned for a touchdown by safety Nick Collins, the second setting up the Packers’ third score.

With 2:31 left in the first half, Green Bay was up, 21-3, but Roethlisberger and the Steelers scored before halftime, on an 8-yard pass to Hines Ward, to make the game interesting.

Green Bay had to play without one of its best defensive players, as veteran cornerback Charles Woodson broke his collarbone late in the first half while breaking up a pass intended for Mike Wallace. The Packers also lost rookie corner Sam Shields (shoulder).

The Packers did little with their first possession, but their second ended with a 29-yard touchdown pass from Rodgers to Nelson on third and 1. Cornerback William Gay had good coverage, but Rodgers’s pass was on the money.

“It was just press [coverage]. Aaron gave me a little signal, if it was press, go deep. It was actually a screen play but he checked to a go route. That’s what we hit,’’ said Nelson, who had nine catches for 140 yards and the score.

An illegal block by Ryan Mundy on Antonio Brown’s kickoff return pushed Pittsburgh back to its 7. On the first play of the possession, Howard Green — a cousin of former Patriots defensive lineman Jarvis Green — whacked Roethlisberger’s arm just as he was letting go a pass intended for Wallace.

The ball fluttered short, and it was easy pickings for Collins, who returned it 37 yards for a touchdown, diving over the goal line.

There have been 13 pick-6s in Super Bowl history, with the teams recording such a score now 11-0.

And there was no one more aware than Rodgers that it had taken all of the Packers to beat the Steelers.

“I’ve said it once and I’ll say it again: No player has ever won a game by themselves,’’ he said.