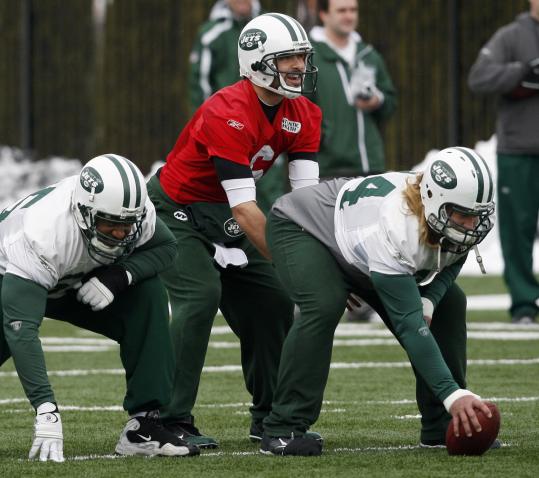 Quarterback Mark Sanchez and the Jets will line up on Sunday against a Steelers team they say they have a lot of respect for. (Mel Evans/Associated Press)
By Shalise Manza Young Globe Staff / January 20, 2011

FLORHAM PARK, N.J. — If, in the eyes of the Jets, the Patriots are demons, then the Steelers must be some sort of football angels.

After a week of expletives, not-so-thinly veiled threats, and personal challenges thrown in the Patriots’ direction, this week the Jets are showing nothing but love to the Steelers as they prepare for Sunday’s AFC Championship game.

“They’re a heck of a team,’’ said center Nick Mangold, sporting an unruly blond playoff beard. “There’s no reason not to have respect for them.’’

“I look at it as the way football is meant to be played,’’ Jets coach Rex Ryan said of the matchup. “This is two hard-hitting, hard-nosed teams getting ready to go at it. Just roll the clock back about 30 years or something — that is the kind of game it’s going to be. I respect the way they play.’’

It’s quite the contrast to comments made by the Jets before, during, and after their surprise win over the Patriots last Sunday. Though, to be fair, Ryan said positive things about Bill Belichick in his postgame news conference.

If the Jets used their dislike of the Patriots to fuel their victory in Foxborough, might being so deferential to the Steelers have a negative effect?

Asked if he is afraid the Jets will have an emotional letdown, defensive lineman Shaun Ellis, the longest-tenured member of the team, looked puzzled.

“Letdown?’’ he said. “We’re one game away from reaching our goals.’’

“Not at all,’’ he said. “If you didn’t understand what’s in front of us, you wouldn’t be in this locker room. We’re moving on, business as usual.’’

Ryan wouldn’t hear of the L-word either, throwing in some of his trademark bravado for good measure.

“Shoot, the Super Bowl is not played for another three weeks or something,’’ he said. “We plan on being there. To do that, it’s going to take everything we have to have a chance at it. You thought last week was emotional and all that, just wait until this week.’’

This is the second straight year the Jets have reached the AFC title game. Last year, their second-half collapse resulted in the Colts going to the Super Bowl.

Then, the Jets say, no one believed in them as a Super Bowl candidate except those within the organization. Now, the expectations are higher. New Jersey’s governor, Chris Christie, said the team belongs to his state — the Jets practice in New Jersey, play their home games in New Jersey, and Ryan and many of the players live in New Jersey, so therefore they’re the Garden State’s team.

Christie likely wouldn’t be making such claims if the team wasn’t one win away from its second Super Bowl appearance. For the record, Ryan laughed at the idea, saying “There’s enough of the Jets to go around.’’

Which is why he doesn’t expect there to be an issue with his players getting ready, emotionally and physically, to face the Steelers.

“Both teams, we’ve both had some huge wins against some outstanding opponents. But we know what this one is all about. It’s going to take everything,’’ Ryan said. “Both teams will be committed to the same thing. Both teams want to get to that Super Bowl and have that opportunity. Both teams want to be AFC champions and represent our conference in the Super Bowl.

“So, you know, as a letdown emotionally, I don’t think that’s even possible this week.’’

It remains to be seen, though, whether Bart Scott will be spreading his arms and “flying’’ to postgame interviews and Braylon Edwards will be doing backflips if the Jets beat the Steelers.

Jets linebacker Jason Taylor did not practice yesterday. Ryan revealed that even though Taylor finished the game against the Patriots, he showed “signs of a concussion’’ afterward, and the team held him out of practice as a precaution. He has been cleared to play and is expected back at practice today. Receiver/kick returner Brad Smith, who was inactive against New England, was limited in practice and told reporters he returned a kickoff in practice for the first time since injuring his groin in the wild-card win over the Colts.