No secrets, and no love lost 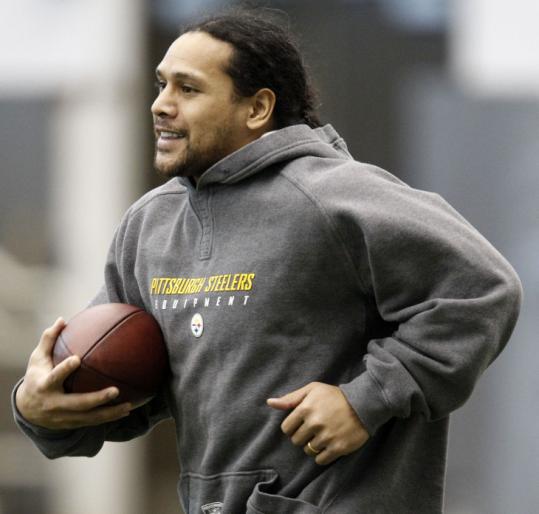 Steelers safety Troy Polamalu is a master of the big play, and he made a sizable one late in the game Dec. 5 against Baltimore. (Gene J. Puskar/Associated Press)
By Alan Robinson Associated Press / January 14, 2011

PITTSBURGH — The players who arrive from other teams notice it immediately. There’s something different about a Ravens-Steelers game.

The hitting seems louder, almost as if the stadium sound system is being turned up to a rock band level. The intensity seems greater. The bumps and bruises last longer, the following week’s game seems to arrive much sooner than usual.

“To me, it’s definitely the best rivalry in sports,’’ Ravens linebacker Terrell Suggs said. “It’s the most physical game of the year.’’

As the mirror-image AFC North rivals from adjoining states await their eighth matchup in the last three seasons — the equivalent of a half-season’s worth of games — there appears to be one discernible difference between them going into tomorrow’s AFC divisional playoff.

Steelers quarterback Ben Roethlisberger has figured out how to beat Baltimore in big games. Ravens quarterback Joe Flacco has improved during each of his three NFL seasons, but he’s still working on solving the mystery wrapped in an enigma that can be the Steelers defense.

Statistics and records don’t always tell all but, considering how close the rivalry is otherwise, those in the Flacco vs. Roethlisberger series are telling. Roethlisberger is 8-2 against Baltimore, with both losses occurring in 2006. Roethlisberger also is 8-2 in the playoffs. Flacco is 2-5 against the Steelers.

“I think he’s beaten us every time he’s been under center,’’ Suggs said of Roethlisberger. “That’s definitely my bigger problem.’’

For all the rivals’ similarities, and their shared toughness, the Ravens understand they probably won’t overtake the Steelers until Flacco’s play matches or surpasses that of two-time Super Bowl winner Roethlisberger.

“It seems like we see great quarterbacks a lot,’’ Ravens coach John Harbaugh said. “We’ve beaten our fair share, but we haven’t beaten him. So it’s our turn.’’

Despite a four-game suspension that delayed his season debut until Oct. 17, Roethlisberger, according to offensive coordinator Bruce Arians, is playing as well as he has at any point in his career. He has a career-low five interceptions, and none in his last 158 pass attempts. Roethlisberger and second-year wide receiver Mike Wallace have teamed up on seven completions of 40 yards or longer.

“He’s playing extremely well right now. He’s really into it,’’ Arians said. “We haven’t probably put in a new pass play since he came back. You just dress them up, change them each week. As long as he knows what he’s doing and he’s comfortable, I couldn’t be more comfortable.’’

Flacco may have taken a step toward closing the quarterback gap when he led Baltimore to a 30-7 wild-card win in Kansas City last weekend, deftly executing the offense while throwing two touchdown passes.

Still, the divisional playoff game would be in Baltimore, not Pittsburgh, if Flacco hadn’t lost a fumble caused by Pro Bowl safety Troy Polamalu Dec. 5. The turnover late in the fourth quarter led to Roethlisberger’s game-winning TD pass and a 13-10 Steelers victory that flip-flopped the teams in the AFC North.

“If the same situation comes up this game, I’m pretty sure we’re going to handle it, and we’re going to be disappointed if we don’t,’’ Flacco said. “Yeah, great play by [Polamalu] but, at the same time, it’s something we probably should have handled.’’

Baltimore also might have won the AFC Championship game two seasons ago if Polamalu hadn’t halted a late drive by returning an interception thrown by then-rookie Flacco for a touchdown that wrapped up the Steelers’ 23-14 victory.

Earlier this week, Suggs predicted the Ravens-Steelers winner likely would go on to win the Super Bowl. Clearly, he believes Flacco is up to the challenge.

“I have 32 more regular-season games, a couple of more playoff games [since 2008],’’ Flacco said. “I think any time you have more game experience, you become more prepared for any team you’re playing . . . Once the ball is snapped, it’s not going to make a difference that this is a playoff game against the Steelers.’’

No doubt Harbaugh hopes Flacco takes that mind-set into Heinz Field, where the Ravens are 0-2 in the postseason.

“You talk about Ben and what he’s meant to the Steelers,’’ Harbaugh said. “We’re hoping to get Joe to that kind of perch where he can take over games just by his talent and personality.’’