THIS STORY HAS BEEN FORMATTED FOR EASY PRINTING
Seahwaks 41, Saints 36 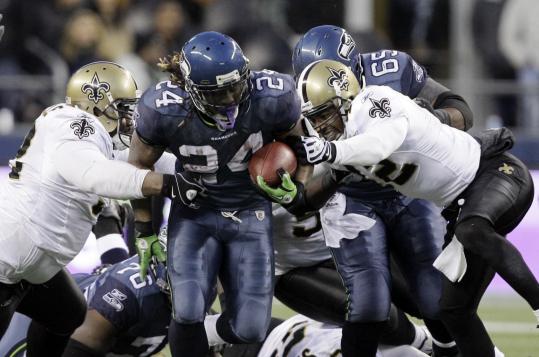 Marshawn Lynch breaks away from the Saints on his 67-yard score with under four minutes left; he broke six tackles on the run. (Elaine Thompson/Associated Press)
By Tim Booth Associated Press / January 9, 2011

Not these Seattle Seahawks. They just sent the defending Super Bowl champions packing.

Matt Hasselbeck threw four touchdown passes and Marshawn Lynch scored on an electrifying 67-yard run with 3:22 left as the Seahawks pulled off one of the biggest upsets in playoff history with a 41-36 win over the New Orleans Saints.

The Seahawks, who won the NFC West with an 7-9 record, held a 34-20 lead early in the fourth quarter before Drew Brees looked ready to lead the Saints on one of their patented comebacks. But Lynch broke a half-dozen tackles for his TD, and, a few anxious minutes later, the party was on.

Seattle, the first division winner with a losing record, will play next weekend at top-seeded Atlanta or No. 2 Chicago.

“We kind of expected to win,’’ first-year Seahawks coach Pete Carroll said. “I know that sounds crazy, but we did expect to win. The fact that it happened, it’s just kind of like, we want to take it in stride and go to the next one. I know it sounds crazy, but that’s the way the mind-set of this team was.’’

Hasselbeck, cleared to play just two days ago because of a hip injury, threw for 272 yards. and his four TD passes set a playoff career high. The veteran threw two scoring passes to tight end John Carlson in the first half and started the second half with a 38-yard strike to Mike Williams to give Seattle a 31-20 lead.

Hasselbeck had fluid drained from his hip before the game — for the third time he said — and he might not have played if the procedure didn’t go well.

“Through all the tough stuff we had to go through the opportunity was still there for us to host a home playoff game against a really good team and I think we were all excited about it,’’ Hasselbeck said. “It was fun.’’

The game wasn’t clinched, though, until Lynch provided a run that’ll be replayed in the Pacific Northwest for years. He took a second-down carry with less than four minutes to go and then the highlights began. He broke six tackles on his 67-yard run, tossing in a massive stiff arm that sent cornerback Tracy Porter to the turf and completed the longest scoring run of his career.

The win was the first in the playoffs for a team with a losing record.

“We respect the heck out of the Saints, but I think we felt something special all week and today, and we’ll see,’’ Hasselbeck said. “It’s a good start for us.’’

Lynch finished with 131 yards on 19 carries, the first Seattle back to top 100 yards all season.

Brees, who completed a playoff-record 39 passes in 60 attempts for 404 yards and two TDs, still couldn’t match Hasselbeck and the Seahawks’ offense. Brees led one final drive, hitting Devery Henderson for a 6-yard touchdown with 1:30 left to get within 41-36.

But DeShawn Wynn was stopped on the 2-point conversion, Garrett Hartley’s onside kick was recovered by Carlson, and the Seahawks were home free.

“It’s disappointing. It starts with us and myself and the rest of the coaches,’’ Saints coach Sean Payton said. “I thought they had effort, but in the end not enough to win this game. It’s disappointing to get in the postseason and finish with a loss to start.’’

Reggie Bush finished with five carries for 12 yards, caught five passes, and did not play in the fourth quarter, jogging back to the locker room early in the quarter and never returning.

The Saints’ Julius Jones, cut by Seattle earlier in the season, ran for two short touchdowns and finished with 120 all-purpose yards.

Brees pulled the Saints within 34-27 on Jones’s 4-yard TD run with 13:11 left, a drive helped by a personal foul by Seattle defensive end Chris Clemons.

Seattle then threw on three straight plays, all incomplete, and used just 16 seconds. Brees and the Saints took over at their 44 and drove to the Seattle 4 before Henderson was stopped short on a third-and-3 pass. The Saints settled for Hartley’s 21-yard field goal with 9:13 left and trailed, 34-30.

Seattle got a first down on its next drive when Hasselbeck hit Brandon Stokley for 12 yards, but Hasselbeck was sacked by Scott Shanle and Seattle was forced to punt. The 52-yard punt by Jon Ryan, plus a penalty on the return, backed the Saints to their 6 with 5:36 left.

Brees couldn’t convert on third and 8 at his 19 and the Saints punted with 4:29 left.