Coming in hot off the tundra 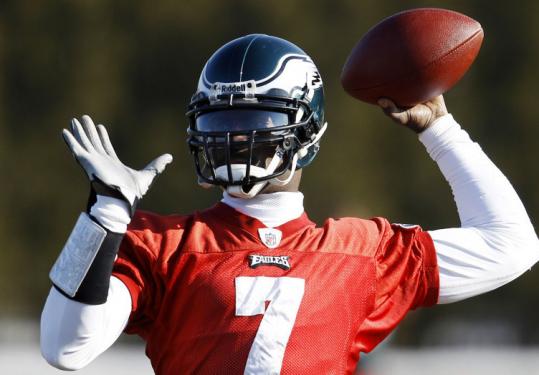 Eagles quarterback Michael Vick has had his best season, but today he’s up against a Packers team with a lot of momentum. (Matt Slocum/Associated Press)
By Rob Maaddi Associated Press / January 9, 2011

PHILADELPHIA — The Green Bay Packers and Philadelphia Eagles have traded places the past two weeks.

Michael Vick and the Eagles were the talk of the NFL after an incredible comeback win over the New York Giants Dec. 19. They were sitting at 10-4 with a chance to secure a first-round bye in the playoffs, and had the second-best odds for winning the Super Bowl at 6-1, according to Bodog.com.

Aaron Rodgers and the Packers were on the brink of elimination after a 31-27 loss to New England. They were a disappointing 8-6 going into a do-or-die game against the Giants.

Now the Packers are the hot team entering the playoffs.

The Eagles (10-6) and Packers (10-6) will meet today at Lincoln Financial Field in the final wild-card game of the weekend.

“It’s huge for us,’’ said Eagles wide receiver DeSean Jackson. “We know what’s out there on the line for us, and this has kind of been our goal all season, to make it through the regular season and put us in the best position to get to the playoffs.

“Now we’re finally here, so we just got to put it together and make some things happen.’’

The Eagles blew their chance at a bye with a stunning loss to lowly Minnesota Dec. 28, then rested nearly all their starters in a meaningless loss to Dallas last week.

The Packers routed the Giants to stay alive in the playoff race. Then they beat NFC North champion Chicago in their second straight must-win game to earn a playoff berth as the No. 6 seed.

Green Bay has a challenge ahead. The Packers have to win three games on the road to reach the Super Bowl. But they’re no ordinary sixth seed, and it’s been done before. The Pittsburgh Steelers won the 2006 Super Bowl as a No. 6 seed. The Eagles reached the 2009 NFC Championship game as the sixth seed.

Oddsmakers list the Eagles as 2 1/2-point favorites because they have the home-field advantage. But the Packers are the consensus pick of many experts.

“They’re the hot team right now, so a lot of people are going to pick them,’’ said Eagles center Mike McGlynn. “It’s obviously motivation, but it doesn’t matter.’’

Despite their seeding, the Packers are 12-1 to win the Super Bowl. Those are the same odds as the Bears, who have a bye this week. The Eagles have dropped to 11-1. Green Bay was 25-1 two weeks ago.

The Packers, a popular preseason pick to win the Super Bowl, were set back by a slew of injuries. They lost six starters, including running back Ryan Grant and tight end Jermichael Finley.

“I think in here there’s a lot of confidence,’’ Rodgers said. “Yeah, we have to go on the road and that makes it tough, but we’re just happy to be able to have played well the last couple of weeks and keep that momentum going as we go into a tough environment this weekend.’’

This will be a rematch of Green Bay’s 27-20 victory at the Linc in Week 1. In that game, Kevin Kolb was Philadelphia’s starter. But Clay Matthews knocked him out with a concussion, giving Vick a chance.

Vick made the most of it. He had the best season of his career and was selected to start the Pro Bowl. His sights are set higher.

The Packers weren’t ready for Vick the first time around. He threw for 175 yards, ran for 103, and nearly rallied the Eagles from a 17-point deficit in the fourth quarter.

“I think we understand what we’re getting ourselves into now and the fact of what type of athlete he is and what he brings to the table,’’ Matthews said. “The fact that we were able to see him for a half is only going to help us out.

“If we have zero sacks but can force him to stay in the pocket, I think that’s a win for us.’’

With Vick, Jackson, LeSean McCoy, and Jeremy Maclin, the Eagles have a potent offense. They finished second in total yards and set a team record for points with 439.

But the Packers have an outstanding defense led by Matthews and Charles Woodson. They were fifth in total yards allowed, and gave up just 10.4 points per game over the last nine weeks. They held opponents to 7 points or fewer five times in that span.

The Packers still have a bitter taste from last year when they lost, 51-45, in overtime to Arizona in a wild-card game. Their defense hopes to avenge that performance.

“I don’t think in that playoff game we were that aggressive on defense,’’ Woodson said. “And this time around, I just don’t think it will be the same.’’