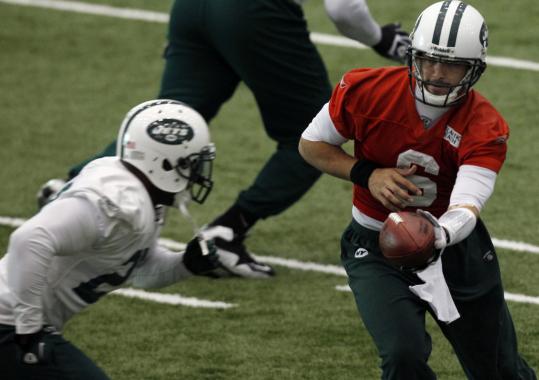 Second-year back Shonn Greene (left) and the Jets ran for more than 100 yards in all but one game and finished the regular season ranked fourth in the league in rushing. (Mel Evans/Associated Press)
By Cliff Brunt Associated Press / January 7, 2011

INDIANAPOLIS — The Colts have looked more like a Rex Ryan-coached team than the New York Jets have in recent weeks.

Indianapolis has supported quarterback Peyton Manning with a suddenly dangerous ground attack that powered a four-game winning streak, and its defense has tackled better and shut down some of the league’s top running backs in recent weeks. That combination earned the Colts a meeting with the Jets tomorrow night in a rematch of last year’s AFC Championship game.

While Indy has been dominating the line of scrimmage, Ryan’s Jets have struggled at times with the running game on both sides of the ball during the past month.

“I think you’ve got to be able to run the ball and stop the run, and those are two things [the Colts have] improved as the year has gone on, whereas we went the other way,’’ Ryan said.

“That’s what playoff teams look like,’’ he said. “That’s key to us, I think, playing a little bit more consistently well in those areas. I think it helped us to notch a few victories on the way.’’

Though Ryan isn’t entirely pleased with New York’s running game, the Jets have averaged 148.4 yards per game rushing this season and are coming off a 276-yard effort in a 38-7 win over Buffalo. New York ran for more than 100 yards in all but one game and finished the season ranked fourth in the league in rushing.

Veteran LaDainian Tomlinson, in his first year with the Jets after spending his entire career with the Chargers, ran for 914 yards and six touchdowns and caught 52 passes for another 368. Shonn Greene, a second-year back out of Iowa, ran for 766 yards and two scores.

“L.T. is the slash type guy and Shonn Greene, he is kind of what you want to call the ground-and-pound speed guy,’’ Colts defensive end Robert Mathis said. “We have to know that the first guy has to make the tackle or hold him up so the cavalry can get there. You can’t just depend on one guy on defense just to make all the plays.’’

The Colts struggled against the run for much of the season before tightening up. During its four-game winning streak, Indy held opponents to 80 yards rushing per game and 3.5 yards per carry.

Three of the league’s top backs found the going rough late in the season. The Colts held Jacksonville’s Maurice Jones-Drew to 46 yards on 15 carries, limited Oakland’s Darren McFadden to 45 yards on 11 attempts, and held Tennessee’s Chris Johnson to 39 yards on 20 carries in the season finale. All three ranked in the league’s top seven in rushing yards per game.

“It’s about every guy on every play on every snap,’’ Colts defensive end Dwight Freeney said. “I think we have played great run-stop defense for three quarters and a half for the majority of the year, and then we will have one run here or one run there that all of a sudden, our average goes skyrocketing. But the last four weeks we have been more consistent, and every snap, everybody understanding that just because it is the fourth quarter doesn’t mean they are going to stop running.’’

Indianapolis had the worst rushing offense in the league before running for 133.5 yards per game and 4.5 yards per carry during their winning streak.

That’s not a good sign for New York, which has allowed at least 100 yards rushing to four of its past five opponents.

Donald Brown, Indy’s leader with 497 yards rushing this season, ran for a career-high 129 yards in a win over Jacksonville.

Joseph Addai, Indy’s usual starter at running back, has returned from a nerve injury that caused him to miss eight games.

“I don’t think it will be 100 percent until next year,’’ Addai said. “I feel like I can play a full game and be productive. That injury, it took a lot to get back, but at the same time, I think each game is helping me out. I think right now I’m in a good situation. I’m feeling confident.’’

Dominic Rhodes was a key player for the Colts when they won the Super Bowl after the 2006 season. The Colts picked him up again after their backs were hurt late in the season, and he provided a boost with his play and in the locker room. He ran for 98 yards in the win at Oakland.

Indy’s ground game has taken pressure off Manning and forced defenses to adjust. Manning was throwing two out of three plays before the Colts made an effort to even things up down the stretch.

“We talked about, ‘Listen, there has to be something that we can hang our hat on in the run game, and we are putting a lot of pressure on our receivers and quarterback to make plays and teams are feeding off that,’ ’’ center Jeff Saturday said. “I think just as an offensive unit, we have committed ourselves to be better in the run game. I’m not going to tell you that we are going to average 40 carries a game, but to get enough touches to make it count and mean something goes a long way.’’