Nothing to rave about

Baltimore offense has been lacking 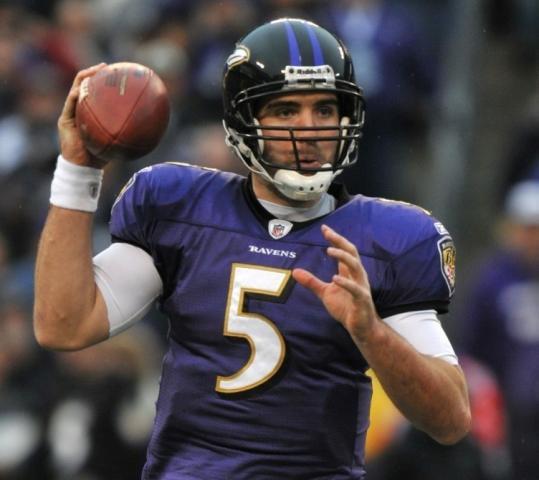 OWINGS MILLS, Md. — The Ravens had all of training camp and the entire regular season to turn their retooled offense into a point-scoring, yardage-eating machine.

And still, as Baltimore prepares to open the playoffs Sunday in Kansas City, the unit remains a work in progress.

The addition of wide receivers Anquan Boldin, Donte’ Stallworth, and T.J. Houshmandzadeh — along with the maturation of third-year quarterback Joe Flacco — was supposed to enhance a passing game that last year finished 18th in the NFL.

The Ravens dropped to 20th this season and ranked 22d in total offense, down nine notches from a year ago.

“What we need to do is eliminate mistakes and just perform the way we practice,’’ offensive coordinator Cam Cameron said yesterday. “The great thing about the playoffs is that it’s a new season, and it’s proven year after year that teams can elevate their play. What better time for us to play the way you’ve seen us play in spurts throughout the entire season in various games?’’

In a win-or-go-home environment, there can be no more slip-ups.

“We’re going to have to click on all cylinders,’’ wide receiver Derrick Mason said. “We’ve got to make some things work, regardless of what’s called. We can no longer point the finger. We’ve got to make it work as an offensive unit. There’s no more excuses, because excuses are going to get you beat.’’

In their tuneup for the Chiefs, Baltimore managed only one touchdown, totaled 199 yards and went 2 for 11 in third-downs conversions during a 13-7 win last Sunday over the lowly Cincinnati Bengals.

“I’m beyond just frustrated with what we’ve been doing on offense,’’ fullback Le’Ron McClain said afterward. “We’ve got so many weapons on offense. We’ve got to use our players more. It’s just frustrating for me. I’m glad we got the victory, but it ain’t good enough to go to Dallas [site of the Super Bowl].’’

There were times this season when the offense actually carried the day, most notably in a 37-34 win over Buffalo, a 34-28 victory in Houston, and a 30-24 win over the defending champion New Orleans Saints. Clearly, the Ravens couldn’t have finished 12-4 without some help from Flacco and Co.

“There were times where our defense wasn’t playing its best football, and we had to pick them up,’’ running back Ray Rice said. “So when you look at a great team, you look at hitting it on all cylinders.

“Offensively, I always say we haven’t played our best football yet. But the great story about that is that we’re 12-4, no matter what stat you want to put behind it.’’

The Ravens scored fewer than 20 points in six games and beat the Bengals last week even though Flacco was sacked four times and threw an interception.

Flacco threw only five interceptions over the final 14 games, and amassed a career-high 3,622 yards and 25 touchdowns. In his estimation, the only flaw in Baltimore’s offense is its failure to excel on third down — a big reason why Cincinnati had a nine-minute advantage in time of possession.

Cameron pointed out that Baltimore won 12 games and finished with a plus-7 turnover differential, and insisted that was more important than its low rating in total yardage.

“We didn’t score as many points as we would have liked, but total yards — which supposedly is the No. 1 measuring stick — is not a measuring stick for success in this league. It hasn’t been for 25 years,’’ Cameron said. “There’s a bunch of those top teams that aren’t in the playoffs. The good news is, all the stats, you can throw them all out the window at this point.

“It’s the stats that go from here, through February, that matter. So obviously, that’s where my focus is.’’