THIS STORY HAS BEEN FORMATTED FOR EASY PRINTING
Falcons 26, Ravens 21 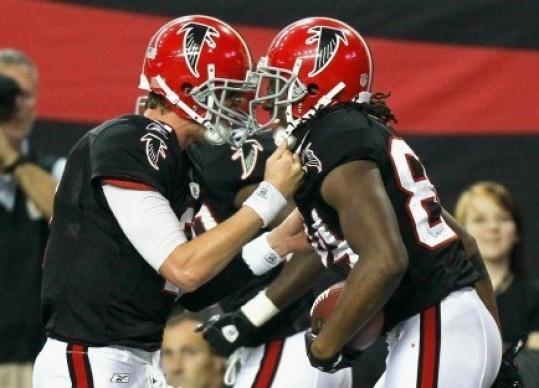 ATLANTA — In the end, the Falcons had a little more push.

Roddy White made some room for himself and hauled in a 33-yard touchdown pass from Matt Ryan with 20 seconds remaining as Atlanta, after squandering a 13-point lead in the fourth quarter, rallied to beat Baltimore, 26-21, last night.

“If you like football, like intense football, that was it,’’ said Falcons coach Mike Smith, a former Ravens assistant. “That might have been the most intense game I’ve ever been involved with at any level of football.’’

The Falcons (7-2) appeared to be in control after Ryan hooked up with White on a 4-yard touchdown with 11:34 remaining to make it 20-7. Curiously, Atlanta coach Mike Smith didn’t attempt a 2-point conversion, which nearly came back to bite him.

After barely touching the ball in the first half, Baltimore (6-3) rallied behind Joe Flacco’s two TD passes, the second of them a 9-yarder to Todd Heap with 1:05 left.

Back came the Falcons, who improved to 18-1 at home with Ryan as the starter. He needed less than a minute to pull off an 80-yard drive, hooking up with Michael Jenkins on a huge third-down pass along the sideline before going back to his favorite receiver for the winner.

Ryan rolled to his left to get away from the pressure, and White shoved off Josh Wilson with his right hand to get free, sending the cornerback tumbling to the turf. Ryan delivered the ball perfectly, White caught it with no one around, and he cruised into the end zone.

Wilson hopped up, screaming for a penalty. But the official kept the yellow flag in his back pocket and held up both arms.

White knew he got away with one.

White came into the game listed as questionable after hurting his right knee last Sunday and practicing only once during the short week. But he danced out of the tunnel during the pregame introductions with a big smile and clearly wasn’t bothered.

He finished with 12 catches for 138 yards. Ryan threw a career-high 50 passes, completing 32 for 316 yards and three touchdowns.

“After they scored, we were on the sideline. We just looked at each other and smiled, man,’’ White said. “We just relish moments like this. We knew we were going to go down there and get what we needed to win this game.’’