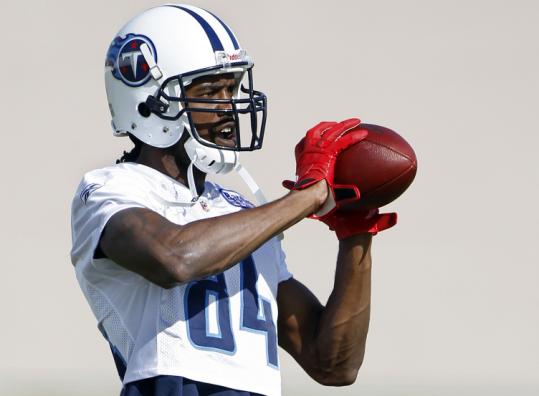 It is not known which quarterback will be throwing to Randy Moss Sunday when he plays for his third NFL team this season. (Mark Humphrey/ Associated Press)
Associated Press / November 12, 2010

Phil Reese said in an e-mail that Sterger met with league officials and “we cooperated fully by providing them with substantial materials in our possession. We now await the NFL’s decision.’’

The NFL is examining whether Favre sent Sterger messages and photos while he was playing for the Jets in 2008 and she was a game hostess for the team.

NFL spokesman Greg Aiello said the league had no comment.

Sterger appeared on a Versus network TV show until recently, but it was canceled because of low ratings.

Browns LB collapses
Browns linebacker Marcus Benard was sent to an area hospital for testing after collapsing in the locker room. Benard, 25, was sitting in a chair in front of his cubicle when he suddenly fell to the carpeted floor. Some of his teammates, who were getting dressed for practice, thought he may have been joking before linebacker Matt Roth yelled for a trainer.

Benard did not appear to lose consciousness and his eyes were open as three members of Cleveland’s training staff checked on him. He was taken to Southwest General Hospital and released last night.

Beason hit with fine
Panthers linebacker Jon Beason called his $10,000 fine for a hit to the head of Saints receiver Marques Colston unwarranted and vowed to appeal. Beason acknowledged he was fined for the hit that drew a 15-yard penalty in the third quarter of last Sunday’s 34-3 loss to the Saints.

Beason said he was covering another player when Colston caught a 7-yard pass near him and he lowered his head to brace for impact.

“It wasn’t like the ball was in the air 40 yards downfield. It was a 4-yard route,’’ Beason said. “Defensive guys have the right to protect themselves as well. I don’t get in that situation what I was supposed to do.’’

Beason, who was penalized for a hit on a defenseless player, stressed that he never left his feet nor led with his helmet. “As soon as I turned he was right there,’’ Beason said. “But they threw a flag, so they’ve got to fine me.’’

Beason thinks the NFL is getting so strict receivers may start to stay down after hard hits to draw 15-yard penalties. “That stuff is going to get to the point where guys are going to lay there on purpose and get 15 [yards] and pop back up and be back in the game,’’ Beason said. “Why not? We’re trying to win games.’’

Beason said he would “definitely’’ appeal the fine, but had little confidence he’d prevail.

Bengals lose T Smith
Right tackle Andre Smith has a broken foot that could end his season, the latest setback in his star-crossed career with Cincinnati. Smith’s left foot was stepped on during a pass-protection drill Wednesday. He went for tests that detected a broken bone in the foot — the same one that he broke last season as a rookie . . . Vince Young got his first chance to practice with new wide receiver Randy Moss after the Titans quarterback was sidelined the past two days with a sprained left ankle. Still, Young was limited and split the work with Kerry Collins. Whether Young starts Sunday at Miami depends on how his ankle responds to his first work since Oct. 31. Coach Jeff Fisher said he expects Young to be able to take the bulk of the practice snaps today . . . Vikings wide receiver Percy Harvin missed practice for a second straight day because of a migraine headache. Harvin is also dealing with a sprained left ankle he suffered Oct. 31 at New England . . . Giants wide receiver Steve Smith was forced to leave practice after hurting a pectoral muscle . . . Bills coach Chan Gailey said new linebacker Shawne Merriman will not play Sunday against Detroit, and is out indefinitely after aggravating an injury to his right Achilles’ tendon Wednesday in his first practice . . . The Cardinals “rested’’ running back Beanie Wells, raising questions about whether he will be able to play Sunday against the Seahawks. Wells had been limited in practice for two weeks after what the Cardinals say was an allergic reaction to the injection of a commonly used medication to lubricate his right knee. Starting outside linebacker Clark Haggans, who missed the last two games with a groin injury, went through a limited workout and could be back Sunday.