Tebow is first-rate after all 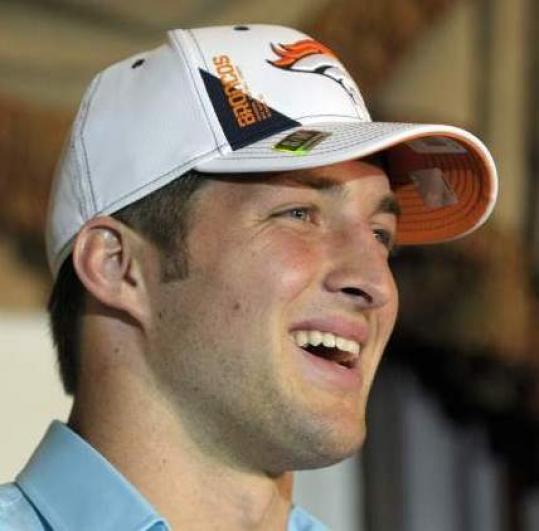 Tim Tebow has a new No. 1 fan in Josh McDaniels.

The coach of the Denver Broncos made the former Heisman Trophy winner a first-round draft pick last night, a bold move that surprised many in football, but not University of Florida coach Urban Meyer.

Tebow helped Florida win two national championships in the Gators’ run-heavy system, but many wondered whether he was worthy of a first-round selection because his skills may not translate to some NFL teams’ passing-centric offenses.

McDaniels is betting they will.

Tebow, he said, “has all the traits you’re looking for in terms of toughness, competitiveness, he’s intelligent, he’s won a lot of games, he’s a leader, he works hard, he’s got all the intangibles you look for in a player at that position.’’

“The Denver Broncos are getting a winner,’’ Meyer said. “Tim will show on the field what he is capable of doing, and more than anything Tim has a competitive fire that will constantly push him to get better and do whatever he can to help his team win.’’

The Broncos gave up choices in the second (No. 43), third (No. 70), and fourth (No. 114) rounds to move back into the first round and draft Florida’s southpaw quarterback, whom McDaniels had raved about last week.

Although it’s highly unlikely he’ll be the starting quarterback in five months’ time, Tebow will begin his NFL career Sept. 12 in his hometown of Jacksonville when the Broncos play the Jaguars.

“Our starting quarterback is Kyle Orton,’’ McDaniels said. “And if somebody performs better than Kyle Orton, that changes. But right now it hasn’t.’’

Tebow said he has no idea when he might take over as the Broncos’ starting quarterback.

“That’s not even something I’m thinking about,’’ Tebow said. “What I’m thinking about is going in there and learning the offense, competing, working hard, and being the first one in and last one to leave, showing them I love this and love what I do, and thank you so much for taking me and I’m not going to let you down.’’

Bryant a Cowboy
Once Dez Bryant was within reach, the Cowboys made sure they grabbed him.

Just three spots from taking him at No. 27, Dallas made a deal with New England to snag the Oklahoma State receiver with top-15 talent but questions about his character.

“I’m not disappointed at all,’’ said Bryant, who grew up two hours away in East Texas. “Me falling to the Cowboys, that’s the best thing that could ever happen to me. I’m so happy. I’m excited. I’m ready to go to work.’’

Bryant was considered by many the best receiver in this draft, an All-American in 2008 when he turned 87 receptions into 1,480 yards and 19 TDs.

His stock slid after his suspension for lying to the NCAA about his activities with former NFL cornerback Deion Sanders, a suspension that kept him off the field nearly all of last season.

Cornering the market
The Jets selected speedy Boise State cornerback Kyle Wilson with the 29th pick in the draft, adding yet another piece to a defense that ranked No. 1 in the league last season. “In this case, the board and the need aligned,’’ GM Mike Tannenbaum said. When a reporter’s microphone malfunctioned and set off a high-pitched squeak at the start of the news conference, coach Rex Ryan was quick on his feet — as usual. “I think those are the receivers crying,’’ Ryan quipped. The Jets took Wilson despite already having All-Pro Darrelle Revis, newly acquired Antonio Cromartie, and Dwight Lowery at cornerback . . . Jets receiver Santonio Holmes acknowledged taking missteps during his four seasons with the Steelers, but said in a message on his website he is looking forward to a clean start with his new team. Holmes was held out for one game by the Steelers in 2008 after police said they detected marijuana in his car. He was recently sued by a woman in Florida who said he threw a glass at her in a nightclub. There also were a series of messages on Holmes’s Twitter account this spring that embarrassed the Steelers, including one in which he suggested a fan kill himself. “I have made some mistakes in my past that I am not proud of, but the most important thing is that I have learned from them,’’ said Holmes, who added, “The 2010 season is going to be a great one,’’ he said . . . The Titans and defensive tackle Tony Brown, a restricted free agent, agreed to a three-year contract extension worth $17 million. Tennessee had tendered Brown at a first-round level worth $2.61 million . . . The Eagles re-signed punter Sav Rocca to a one-year contract.