THIS STORY HAS BEEN FORMATTED FOR EASY PRINTING
Packers 31, Lions 21 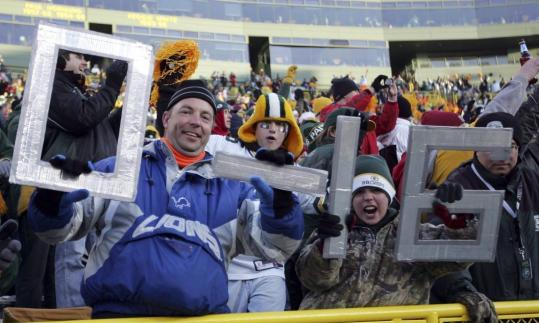 Lions and Packers fans alike were well aware that history was being made at Lambeau Field. (Allen Fredrickson/Reuters)
Associated Press / December 29, 2008
Text size – +

GREEN BAY, Wis. - Nobody will remember the Detroit Lions came close to winning their last game. All anyone will know - now and forever - is 0-16.

The worst record in NFL history, a dubious distinction that will permanently stain everyone involved.

The Lions lost to the Green Bay Packers, 31-21, yesterday, making them the first team to go winless through a 16-game season. The 1976 expansion Tampa Bay Buccaneers (0-14) were the last NFL team to complete a season without a victory.

"I've got to live with this," center Dominic Raiola said. "I've been here eight years. This is on my r??sum??."

It's also on the r??sum?? of Lions coach Rod Marinelli, who faces an uncertain future.

"No competitor wants to go through something like this," Marinelli said. "This is not fun to go through, obviously. But there's people going through a lot worse than this."

Asked what the next step might be if he does keep his job, Marinelli said, "Let me get through Step 1 first."

The Lions' last loss didn't come without a fight. After Detroit fell behind, 24-14, midway through the fourth quarter, Kevin Smith's 9-yard touchdown run brought the Lions back within a field goal.

But Packers quarterback Aaron Rodgers responded with a 71-yard touchdown pass to Donald Driver and the Lions' Dan Orlovsky threw an interception on fourth and 27 with three minutes left, dooming Detroit to futility of historic proportion.

"It's just kind of numb," veteran kicker Jason Hanson said. "It's here. It's been coming, though, a train rolling down the tracks for a while. We tried to stop it. We couldn't."

The Lions were building toward this for years and now have lost 23 of their last 24 games. The 0-16 record will be a lasting testimony to the Matt Millen era. With Millen as president of the team from 2001 until he was fired Sept. 24, Detroit won only 31 games.

It's so bad that some Lions can't remember the last time they won.

"I don't ever want to be a part of this again," Orlovsky said. "We haven't won since, November of '07, maybe? I don't even know the last time we won a game."

The Lions haven't won since Dec. 23, 2007, when they beat Kansas City. Green Bay is where this woeful streak began at the end of last season. Since then, the Lions have lost 17 straight and have been outscored, 551-281.

Orlovsky was 22 of 42 for 225 yards with two touchdowns and two interceptions for the Lions, whose bid to avoid the record book came undone in large part because of ill-advised penalties.

"We didn't want to lose, no, we didn't," Rodgers said. "But really it's not on your mind once the game starts. I didn't even think about it until the fans started chanting in the fourth quarter. They played hard, they really did."

The silence in the Lions' locker room was so heavy it was practically suffocating.

No laughter, no jokes, certainly no congratulations for a job well done. Just the occasional sound of luggage being zipped up.

And really, with derisive chants of "Oh-and-16! Oh-and-16!" at Lambeau Field still ringing in their ears, was there anything left to say?