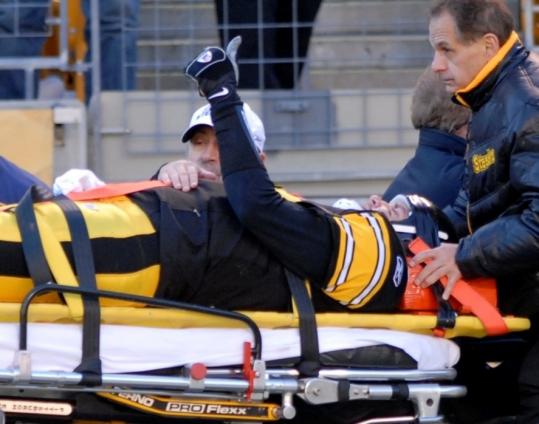 For a team that supposedly couldn't lose, the Steelers nearly sustained the worst possible setback going into the playoffs. The Browns ended a miserable season with an embarrassing loss that may lead to another today, that of Romeo Crennel's job.

Ben Roethlisberger gave playoff-bound Pittsburgh a major scare by sustaining a concussion during a 31-0 home rout of the Browns yesterday, a game notable only in that it likely was Crennel's last as Cleveland's coach.

Roethlisberger, expected to play a half to stay sharp before a two-week break, lay on the turf for nearly 15 minutes after being leveled by Willie McGinest and D'Qwell Jackson while delivering a pass late in the second quarter. Hospital tests revealed no other injuries, and the quarterback probably will be ready when the Steelers (12-4) play at home Jan. 10 or 11.

"We are optimistic of where he's going to be," coach Mike Tomlin said. "Again, it is encouraging."

Roethlisberger's injury highlights the risk NFL coaches take by playing regulars once a team's playoff positioning has been determined. Tomlin didn't want his key players sitting for three weeks, and most lobbied to play.

Rusty doesn't begin to describe a Cleveland offense that ended the season by failing to score a touchdown for six games, an NFL record. The Browns had never been shut out in successive games.

Cleveland (4-12) threw for only 26 yards, tying for the second fewest in club history. The only offense came from Jamal Lewis, who ran for 94 of their 126 total yards while becoming the first Browns running back since Mike Pruitt in 1980-81 to gain 1,000 yards in successive seasons.

Owner Randy Lerner will meet with Crennel in Cleveland today, almost certainly to fire him, and general manager Phil Savage's fate is equally tenuous. A person with knowledge of the decision told the AP last night that Savage has been fired with four years left on his contract.

"We're going to leave here, go back and have a final meeting tomorrow, but we'll go into the offseason seeing what we can do better and get more competitive," said Crennel, evading questions about what he expects to happen.

Panthers 33, Saints 31
John Kasay's 42-yard field goal with one second left lifted Carolina over host New Orleans, locking up the NFC South title and the second seed in the conference for the Panthers.

Carolina (12-4) will get a first-round bye and then a chance to extend its perfect record in Charlotte in the divisional round.

Brees, meanwhile, came up just short in his bid to top Dan Marino's NFL season record of 5,084 yards passing in 1984. Brees needed 402 yards to set the mark, but finished with 386, which made him only the second player to pass for more than 5,000 yards. Brees had a final, unexpected chance to break the record when Kasay's last kickoff went out of bounds, but Brees's long pass fell between two receivers past midfield.

Brees finished 30 of 49 with four touchdown passes and one interception.

Falcons 31, Rams 27
Jerious Norwood ran for two touchdowns, including a go-ahead 45-yard run with 3:41 left, as host Atlanta held off St. Louis to clinch the No. 5 seed in the NFC.

The Falcons improved to 11-5, completing their improbable run to the playoffs after a 4-12 finish in 2007. Atlanta overcame three turnovers, including two in the fourth quarter, to hand the Rams (2-14) their 10th straight loss.

The Falcons' hopes of winning the NFC South and gaining a first-round bye ended with Carolina's win. Instead Atlanta will travel to NFC West champion Arizona for a wild-card game next weekend.

Michael Turner fumbled into the end zone after a 70-yard run, spoiling a scoring opportunity early in the final quarter. Turner had 25 carries for 208 yards and a touchdown. Then, on Atlanta's next possession, Matt Ryan's second interception of the game set up Josh Brown's 27-yard field goal, giving St. Louis a 27-24 lead with 6:39 remaining.

Raiders 31, Buccaneers 24
Third-string running back Michael Bush rushed for a career-high 177 yards and scored on a 67-yard fourth-quarter jaunt as Oakland rallied on the road and sent Tampa Bay (9-7) to a fourth straight loss.

The Raiders (5-11) overcame a 10-point fourth-quarter deficit to win for the second straight week and make their final case for interim coach Tom Cable to retain his job.

Peyton Manning was 7 of 7 for 95 yards with one touchdown and a perfect rating of 158.3, extending his NFL record of 4,000-yard seasons to nine. Marvin Harrison caught seven passes for 31 yards, passing Cris Carter for second all time with 1,102 receptions. Dallas Clark broke the franchise season record for yards receiving by a tight end, finishing with 848. And the Colts won at least 12 games for a sixth straight season, extending their NFL record.

Tennessee (13-3) managed only 125 yards of offense and had just one first down in the first half. Coach Jeff Fisher put eight starters on the inactive list and yanked quarterback Kerry Collins after only three plays.

The Bears (9-7) needed a win and losses by Tampa Bay and Dallas to reach the postseason. But they couldn't protect an early 10-0 lead and struggled to contain the NFL's leading receiver, who had 10 receptions for 148 yards.

Cardinals 34, Seahawks 21
Kurt Warner threw four touchdown passes, his most in seven years, then sat out the fourth quarter as host Arizona tuned up for the playoffs by spoiling Mike Holmgren's final game as Seattle's coach.

Two of Warner's TDs went to Larry Fitzgerald, who caught five passes for 130 yards. The Cardinals (9-7) finished the regular season with a winning record for the first time in a decade and only the second time since 1984. The Seahawks' 4-12 record is by far their worst in 10 years under Holmgren.