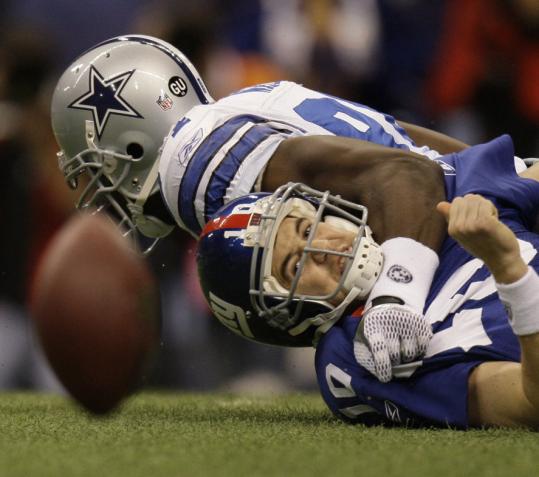 The soap opera that is the Dallas Cowboys' offense gets all the attention. The defense, however, is keeping them in the playoff hunt.

DeMarcus Ware added three sacks to his NFL-leading total and the Cowboys took down Eli Manning eight times on their way to a crucial 20-8 victory last night in Irving, Texas, in a game where all eyes were otherwise on Tony Romo, Terrell Owens, and Jason Witten.

With everyone watching to see how Romo would appease the two main rivals for his offensive affection, he pulled a fast one by tossing touchdown passes to third receiver Patrick Crayton and fullback Deon Anderson. Then, with 2:16 left and Dallas trying to manage the clock, rookie Tashard Choice broke off a victory-sealing 38-yard TD run.

Finally, the Cowboys (9-5) could exhale, back in control of their wild-card chances.

"It wasn't a pretty win, but we got it done," said Owens, who had three catches for 38 yards. Witten caught five passes for 44 yards.

The Giants (11-3) have locked up the NFC East title, but suddenly things aren't going so well for the reigning Super Bowl champions. New York has lost consecutive games for the first time since starting 0-2 last season, with both losses coming since star receiver Plaxico Burress shot himself in the leg and was lost for the season. This one featured its fewest points of the season and its first regular-season game without a touchdown since November 2004.

Romo was 20 of 30 for 244 yards with two touchdowns and no interceptions. He was sacked four times, including back-to-back plays at the end of the first quarter that left him wincing in pain. He didn't miss a snap, but wasn't moving as well as he usually does.

Romo still performed better than Manning, who finished 18 of 35 for 191 yards with two interceptions. Dallas had its third straight game with at least five sacks. Ware leads the league with 19 sacks.

Peyton Manning led host Indianapolis on two fourth-quarter scoring drives after Detroit had rallied to tie the game, keeping the Lions on track for a winless season.

The Colts (10-4) have won seven straight, while Detroit lost for the 15th consecutive game. The Lions are two defeats away from becoming the first NFL team to finish 0-16.

Manning was 28 of 37 for 318 yards and one touchdown, and although the Lions did a respectable job defending receivers, they allowed tight end Dallas Clark to catch 12 passes for 142 yards, including a 3-yard TD reception that gave the Colts a 21-10 halftime lead.

But Detroit fought back. A fumbled punt early in the third quarter set up Jason Hanson's 31-yard field goal. Kevin Smith went around the left side for a 1-yard TD run with 12:52 left, and Orlovsky - starting for a sore-armed Daunte Culpepper - tied it at 21 with a 2-point conversion pass.

Manning methodically marched the Colts 88 yards, handing off to Dominic Rhodes for a 1-yard TD run and a 28-21 lead, and he closed it out by grinding out nearly all of the final five minutes before Vinatieri's 30-yard kick sealed it with 39 seconds left.

Carolina finished off a perfect regular season at home, clinching at least a tie for the NFC South title behind a big day from Steve Smith (nine catches for 165 yards and a touchdown) and another stifling defensive effort.

The Panthers (11-3) put on a dominating display in front of owner Jerry Richardson, who watched from his end zone suite four days after it was announced he needs a heart transplant. Carolina took its first lead on rookie Jonathan Stewart's 2-yard run midway through the second quarter - with Smith's 38-yard grab the key play of the drive - then got a gift to take a 20-10 advantage into halftime.

Instead of running out the clock on second and 10 from its 18, Denver called a timeout. The Broncos fumbled on the next play, Carolina's Tyler Brayton recovered, and John Kasay kicked a 44-yard field goal as time expired.

DeAngelo Williams's 56-yard touchdown run on the first drive of the second half put it away for Carolina, which won its third straight.

Denver (8-6) blew a chance to clinch the AFC West. The Broncos were held to 279 total yards.

Rivers, who came in with an NFL-best 102.0 passer rating, finished 34 of 48 for 346 yards with two touchdowns and one interception. He led San Diego (6-8) on an 89-yard drive, hitting Malcom Floyd with a 4-yard TD pass with 1:13 left, making it 21-16. After the 2-point conversion pass failed, the ensuing onside kick bounced off the chest of the Chiefs' Dwayne Bowe, and Kassim Osgood recovered at the Chargers' 39.

On the next play, Rivers hit Vincent Jackson for a 39-yard pass to the KC 19. Then on third and 1 from the 10, Rivers found Jackson in the end zone and the Chargers seized the lead with 36 seconds left.

The Chiefs (2-12) took over at their 46, and converted on third down when Tyler Thigpen hit Tony Gonzalez for 12 yards, picking up 5 more yards when San Diego was flagged for a delay of game penalty. Connor Barth lined up for the potential winning kick with one second to play, but it sailed wide left.

Michael Turner ran for 152 yards, and host Atlanta finished off a sloppy performance with Jason Elam's 34-yard field goal in overtime, pulling out a win over Tampa Bay that tightened the NFC playoff race.

The Buccaneers (9-5) blocked a punt to set up Matt Bryant's tying 38-yard field goal with 48 seconds left in regulation. But the Falcons (9-5) stuffed Tampa Bay on the first possession of overtime as John Abraham recorded his third sack of fill-in quarterback Brian Griese on third down. After the punt, Atlanta drove 55 yards for Elam's winning kick.

Andre Johnson had a career-high 207 yards on 11 receptions, including a 13-yard touchdown catch in the second quarter that propelled host Houston (7-7) to its fourth consecutive win and broke a seven-game losing streak to Tennessee.

It was an uninspired showing for the Titans (12-2), who had a chance to secure home-field advantage throughout the playoffs. Tennessee had just 100 yards rushing after gaining 527 in its previous two games.

Ryan Fitzpatrick threw for one touchdown and ran for another as Cincinnati (2-11-1) built a 17-0 lead at home and held off Washington (7-7), which capped a tumultuous week by losing for the fifth time in six games.