THIS STORY HAS BEEN FORMATTED FOR EASY PRINTING
49ers 24, Jets 14 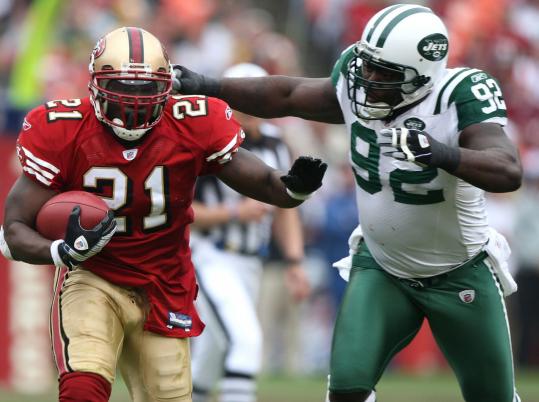 SAN FRANCISCO - From lineman Joe Staley's smart fumble recovery in the end zone to Shaun Hill's final touchdown pass, the San Francisco 49ers showed they're finally getting it together - even if it's probably a bit too late to save their season.

Yet the chilly winds at Candlestick Park did nothing to cool down Jets coach Eric Mangini, whose reeling team has only three chances left to stop a promising year from totally falling apart.

Joe Nedney kicked a 32-yard tiebreaking field goal early in the fourth quarter and Bryant Johnson made a diving 3-yard touchdown catch with 6:05 left for the suddenly solid 49ers (5-8), who have won three of four. Staley, their 315-pound left tackle, jumped on receiver Jason Hill's fumble for the 49ers' first score, adding a leaping spike that could have been mistaken for a tremor in a less earthquake-savvy stadium.

"It's just great to celebrate something," Staley said.

San Francisco beat an AFC East team with a winning record for the second straight week, dropping the Jets (8-5) into a tie atop the division with the Dolphins and Patriots.

Frank Gore caught a short TD pass and rushed for 52 yards before injuring his left ankle early in the second half for the Niners, who improved to 3-3 under interim coach Mike Singletary.

Seven weeks after a humiliating overtime loss to Oakland, New York struggled against Mike Martz's offense - which held the ball for nearly 40 minutes in the Niners' biggest time-of-possession advantage in nine years - and a San Francisco defense that has rarely stopped anybody.

The Jets' 16-13 overtime loss to Raiders in mid-October was the lowest point of their season until last week's 34-17 home loss to Denver, which snapped a five-game winning streak.

"Time's running out," said cornerback Ty Law. "We have to go out and play to our potential."