Cardinals strut their stuff in OT 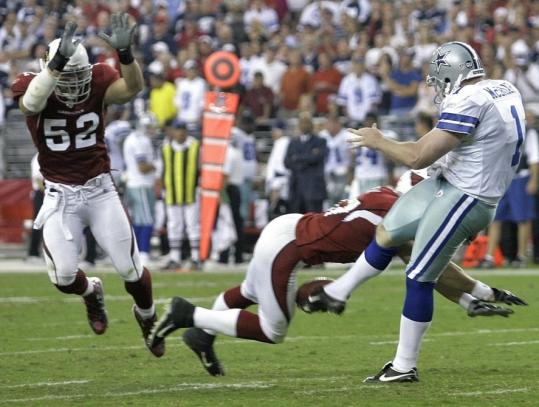 Two former Patriots brought an abrupt end to a day of confusion, comebacks, and clutch performances in the desert.

Sean Morey blocked Mat McBriar's punt and Monty Beisel scooped up the ball and scored from 3 yards to give the Arizona Cardinals a crazy 30-24 overtime victory over the Dallas Cowboys yesterday in Glendale, Ariz. It was the first time in NFL history that a blocked punt for a touchdown ended a game in overtime.

Morey, a native of Marshfield, Mass., rushed untouched off the left side of the Dallas line to block the kick. Beisel, a backup linebacker, picked up the ball at about the 3 and bowled over the goal line.

The stunning play by two of Arizona's most unheralded players brought a conclusion to a game that began with a 93-yard kickoff return for a touchdown by the Cardinals' J.J. Arrington, and featured 10 points by Dallas in the final two minutes of regulation, including Nick Folk's 52-yard field goal that barely cleared the crossbar as time expired.

Folk was in field goal range only because a 5-yard offside penalty was called against injured Arizona linebacker Travis LaBoy as he tried to limp downfield. The penalty moved the ball from the 40 to the 35.

That was just one of the weird moments in Arizona's sixth consecutive home victory.

The Cardinals (4-2) scored 17 consecutive points, including a pair of touchdown passes by Kurt Warner, to go ahead, 24-14, on Neil Rackers's 41-yard field goal with 3:17 left in regulation.

Tony Romo, who threw three touchdown passes but fumbled twice, connected with Marion Barber on a 70-yard scoring play that cut it to 24-21 with two minutes left. The Cowboys (4-2) got the ball, and Romo connected with Patrick Crayton on a 30-yard play to the Arizona 39, where the Dallas quarterback spiked the ball with four seconds left to stop the clock.

Eagles 40, 49ers 26
Donovan McNabb passed for 280 yards and two scores without his top two receivers and his best running back, and Philadelphia's defense forced three turnovers during a 23-point fourth quarter in San Francisco.

Donald Strickland returned a blocked field goal 41 yards for a touchdown on the final play of the first half for the 49ers (2-4), who went ahead, 26-17, in the third quarter. But the Eagles' defense repeatedly made stunning plays in the final minutes.

After David Akers's 38-yard field goal put Philadelphia (3-3) ahead with 7:46 to play, Quintin Mikell's interception return to the San Francisco 7 set up another short field goal. Trent Cole then swatted the ball out of J.T. O'Sullivan's hands, and Chris Clemons recovered to set up another field goal with 1:10 left.

San Francisco got past midfield with one last drive, but O'Sullivan threw a pass directly to Juqua Parker, who returned it 55 yards for a score with 38 seconds left.

The Eagles' Correll Buckhalter rushed for 93 yards and a touchdown while filling in for injured All-Pro Brian Westbrook. The Eagles also played without injured receivers Kevin Curtis and Reggie Brown.

Jets 26, Bengals 14
Thomas Jones ran for two touchdowns, including a 1-yarder late in the game, and caught a scoring pass from Brett Favre in an otherwise lackluster home win for New York over winless Cincinnati.

The Jets (3-2) improved to 3-0 in games immediately following a bye under coach Eric Mangini, but this one was far from easy. With New York holding a tentative 20-14 lead, the Jets needed a 10-play, 41-yard drive by Favre that ate up the clock to seal the victory.

Ryan Fitzpatrick couldn't get much going for the Bengals in place of an ailing Carson Palmer. He was 20 of 33 for 152 yards as Cincinnati dropped to 0-6 for the third time since 2000. The Bengals gained just 43 yards rushing on 21 carries, with Fitzpatrick's 23 leading the way.

Favre, coming off a six-touchdown performance against the Cardinals two weeks ago, wasn't nearly as explosive in this one. He finished 25 of 33 for 189 yards - throwing mostly short passes - with a touchdown and two interceptions.

The Lions (0-5) seemed to outplay the Vikings (3-3) for the entire game in a spirited effort, but Minnesota got a big boost from field judge Mike Weir. Trailing, 10-9, in the final three minutes, the Vikings had second and 20 from their 32. Gus Frerotte threw deep down the sideline for Aundrae Allison, and the ball fell incomplete. But Weir whistled cornerback Bodden for pass interference despite what appeared to be minimal contact.

The 42-yard penalty gave the Vikings the ball at the Detroit 26. Longwell converted the kick five plays later. Frerotte finished with 296 yards, and Bernard Berrian had five catches for 131 yards, including an 86-yard touchdown that cut the deficit to 1 in the third quarter.

Making the first start of his career, former UConn quarterback Dan Orlovsky threw for 150 yards and a touchdown for Detroit, but made a blunder in the first quarter when he ran out of bounds in the end zone for a safety that ultimately was the difference.

Packers 27, Seahawks 17
An ailing Aaron Rodgers ran for a touchdown early, then threw two scoring passes in the second half to perhaps save Green Bay's season. Host Seattle, meanwhile, looked as inept as its 1-4 record would indicate.

Rodgers, again starting despite a sprained throwing shoulder, was 21 of 30 for 208 yards as the Packers (3-3) won for the 10th time in 13 road games. He far outplayed Charlie Frye, the Seahawks' third-string QB forced to start because of injuries. Frye completed 12 of 23 passes for just 83 yards with two touchdowns and two interceptions.

Just before halftime, Green Bay ended a 13-play drive with a 1-yard sneak by Rodgers, making it 10-10. Rodgers found Greg Jennings for a 45-yard touchdown that gave the Packers their first lead, 17-10 in the third quarter.

Coming in with a completion rate of nearly 69 percent, Brees connected on his first 16 throws - one short of his franchise record - and finished 26 of 30. Reggie Bush scored on a 3-yard run and 15-yard reception.

Colts 31, Ravens 3
Peyton Manning easily had his best game of the season, throwing for 271 yards and three touchdowns, and Indianapolis (3-2) clicked on all cylinders in destroying Baltimore (2-3) for its first home win since December.

Manning, who had struggled with his timing after recovering from offseason knee surgery, hit receivers in stride and completed passes into double coverage, finishing 19 of 28. Marvin Harrison caught two TD passes and Reggie Wayne had the other.

Buccaneers 27, Panthers 3
Jeff Garcia, starting for the first time since the season opener, threw for 173 yards and a touchdown and Warrick Dunn had his most productive day running the ball since rejoining the Bucs with 115 yards, leading Tampa Bay to its first home victory over Carolina since 2002.

The Panthers (4-2) fell into a tie for first in the NFC South with the Bucs, who intercepted Jake Delhomme three times, setting up a touchdown and stopping two other promising drives.