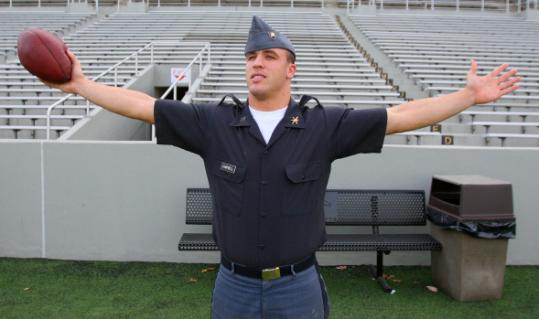 Caleb Campbell is bidding adieu to Michie Stadium - and a combat career in the US Army. (Stan Grossfeld/Globe Staff)
Email|Print|Single Page| Text size – + By Stan Grossfeld Globe Staff / May 30, 2008

He's just returned from the Detroit Lions' rookie camp, where he was in a classroom learning new defenses at precisely 4:45 a.m. At that time, even the West Point Military Academy looks like Sominex City. The grueling workouts ended after 8 p.m.

Such is life in the NFL for rookies.

"It was fun, actually," says the first Army football player drafted in more than a decade.

The 6-foot-2-inch, 229-pound strong safety, whose selection in the seventh round of the April draft was met with chants of "USA, USA" on national television and a hailstorm of controversy, is permitted to play for the Lions while on active duty provided he serves as a part-time recruiter on his offdays, according to the alternative service option program implemented by the Army in 2005.

After two years, if he remains in the NFL, Campbell can buy out his remaining three years of active duty in exchange for six years in the US Army Reserves. Meanwhile, he's been called everything from a hero to a punk, a money-grabber, a traitor, a coward, a deserter, and worse.

But Campbell, 23, vehemently denies he is trying to get out of going to Iraq or Afghanistan. "They're saying, 'Hey, you're not going to Iraq,' " he explains. "It's like I was on a plane, headed to Iraq, and they pulled me off the plane and said, 'Hey, you're going to play NFL football.' See, what people don't understand is I'm going to still be commissioned as a second lieutenant, I'm still on active duty. I'm still serving my country, I'm just doing it in a different way. It's not like I'm the only recruiter in the whole United States Army. I'm part of a recruiting unit. I came to the academy at a time of war. I thought I would be in the middle of it. But I have been given this extraordinary opportunity."

It seems everyone has an opinion on his career plan. "The worst was a handwritten letter," says Campbell, a native of Perryton, Texas. "It said, 'Please don't do this. How can you look your classmates in the eyes when they are serving their country and going to Iraq and you're taking the easier way out?' That hit me . . . But I'd be a fool not to take advantage of this opportunity."

The Army has fielded so many interview requests that it scheduled a media conference call and then shut down press visits to West Point. It wants him to study for final exams and graduate. But through it all, Campbell remains remarkably calm - as serene as the lazy Hudson River, which winds its way around campus.

But in the ugly world of talk radio, there is righteous indignation. Roger Staubach, the great quarterback for the Dallas Cowboys, served five years after graduating from the US Naval Academy, including one year in Vietnam, before embarking on a Hall of Fame career. The Admiral, David Robinson, served two years before playing in the NBA. And Navy, in this time of war, isn't allowing anybody out early to play a sport, even after two years.

"We're taking the high road on this," says one Navy official, who requested anonymity. "They've been under the radar on this for years. We hope the Department of Defense will make sure the policy is the same for all of us."

The Naval Academy and the Air Force Academy don't offer an alternative option.

Campbell says the overwhelming majority of e-mails he received were positive.

"There's 40,000 West Point graduates behind you," read one. Another is from overseas: "Go after the NFL dream and ignore anybody who says that deploying is the only way to serve. I'm in Afghanistan right now, and I'll happily tell anyone who disagrees with your choice that the world has enough 2LT's [second lieutenants] to let a guy with the potential for a pro career to give that dream a shot. If you represent us well as a player and a public figure, it's more than enough for me."

But, initially, Campbell's motives were even questioned by his fellow cadets.

"People were confused," Campbell says. "They would say, 'You took somebody's spot that wanted to serve this country by coming to West Point.' "

Some e-mails contrast him to Pat Tillman, the Army Ranger who died in Afghanistan by friendly fire after giving up a million-dollar NFL career. Campbell bows his head and bites his lip when Tillman's name is mentioned.

"Pat Tillman was an extraordinary man," says Campbell. "I think his legacy will live forever. What he did is very courageous. But you can't relate me to Pat Tillman, because he was just a far greater man. I mean, what he did was unbelievable, but that was his choice. Words can't describe the way I feel about him.

"We all fight for freedom in different ways. Each in our own way."

"He's one hard-nosed kid," says Brock. "Based on work ethic, he's going to be as good as anybody they have."

Asked about the recruiting advantage Army now has over Navy, Brock, whose brother, Pete, played 12 years for the Patriots, went Belichickian. "It's not my job to worry about the US Naval Academy," he says.

In Detroit, Campbell is being moved from safety to outside linebacker by coach Rod Marinelli, a Vietnam veteran. Team president Matt Millen's son was a teammate of Campbell's at West Point. Some people say Campbell will be kept on the team for sentimental reasons.

"I don't have a whole lot of sentimental," Marinelli told the Detroit Free Press. "That's just me. I like guys who run, hit, and tackle, and if he does that, then I'm pretty sentimental."

Campbell, who loves to hit, agrees.

"In all reality, this is a cutthroat business," he says. "This is the National Football League. We're talking about taking somebody's job that's supporting a family. If you're not good enough, you're going to get cut. That's the down and dirty on that."

In an awkward situation at rookie camp, Air Force's Drew Fowler is trying out for the same linebacker position as Campbell. Unlike Campbell, he will have to wait two years to play if he makes the team.

"I know from Fowler, Air Force is reviewing its policy," says Campbell. "He went around with my article in Sports Illustrated saying, 'Give us this opportunity.' "

Of the people who call him a coward - or worse - Campbell smiles.

"It doesn't bother me," he contends. "People have the right to free speech of their opinions. That's America. If we didn't have those opinions, this would be a boring place. If anything, it's motivated me to do bigger and better things. I don't listen to it. I turn it around so I'm going to get that extra run. If anything, I thank them for the extra motivation they've given me."