THIS STORY HAS BEEN FORMATTED FOR EASY PRINTING
Wisconsin 4, BU 1 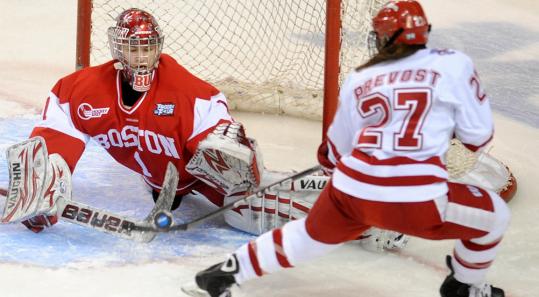 Boston University freshman goalie Kerrin Sperry flashes out her left pad to deny Carolyne Prevost for one of her 32 saves in a losing effort in the championship game. (Associated Press/Erie Times-News/Rob Engelhardt)
By Monique Walker Globe Staff / March 21, 2011

ERIE, Pa. — They kept the top-seeded women’s hockey team under their season average in shots. They prevented two of the nation’s top five scorers from collecting a goal.

Yet all the energy the players on the Boston University women’s hockey team spent limiting Wisconsin’s offensive chances yesterday didn’t allow the Terriers to do much else.

BU’s first appearance in the NCAA Frozen Four title game ended in a 4-1 loss to Wisconsin, the Badgers claiming the Division 1 championship in front of 3,956 spectators at Tullio Arena.

Danvers, Mass., native Meghan Duggan, who leads the NCAA in points (86), didn’t register a goal or an assist yesterday, but on a team that averages five goals a game, the Badgers had plenty of options. Wisconsin took a 2-0 lead in the second period courtesy of goals from Carolyne Prevost and Brooke Ammerman, and the Badgers didn’t relinquish that advantage.

“Our team played one of our best games we’ve played all season and I think that’s what we needed in this national championship game in order to take the trophy home,’’ said Duggan, the winner of the 2011 Patty Kazmaier player of the year award.

Duggan collected a goal and two assists in the semifinal win against Boston College, which helped her share the tournament co-MVP award with teammate Hilary Knight, who leads the nation in goals (47). Knight didn’t have a goal yesterday, but had two assists.

BU coach Brian Durocher said he liked his team’s chances if it could keep it a low-scoring game. A 4-1 victory against Cornell in the semifinals gave BU (27-7-4) its first Frozen Four victory in program history Friday. In that contest, the Terriers allowed just 15 shots.

Wisconsin (37-2-2) presented another level of challenge for BU, though. Throughout most of the season, the Badgers held the No. 1 spot and had not lost since November. They beat BC in the semifinals, 3-2, on a goal in the final seconds.

BU kept the game manageable after falling behind by that two-goal margin in the second. The Terriers had been bombarded by shots as Wisconsin jumped on loose pucks and turnovers to send bid after bid at freshman goaltender Kerrin Sperry. Durocher used his only timeout to settle down his team, which was outshot, 18-4, in the second.

“I have lived by the belief that you’re not really doing that much if you go home with your timeout, and it doesn’t have to be in the last minute of the game,’’ Durocher said. “It’s a delicate line emotionally, if you don’t intervene on this thing it can snowball in the wrong direction.’’

After the timeout, BU inched closer when forward Marie-Philip Poulin picked up the puck at center ice and sped along left wing to whip a backhand over the glove of Alex Rigsby unassisted with four minutes left in the second. The goal seemed to energize BU.

But as the third period moved along, the Terriers reached a desperate point, and Wisconsin’s Mallory Deluce scored at the 16:37 mark to give Wisconsin a 3-1 lead.

Durocher pulled Sperry with three minutes to go to give his team an extra skater, but Rigsby stopped BU’s few opportunities.

Prevost ended the Terriers’ hopes for good with an empty-net goal with 18 seconds left.

Wisconsin outshot BU, 36-16, and Sperry, of North Reading, Mass., made 32 saves. She is one of several freshmen and sophomores on the squad.

“With the youth and the talent that this squad has coming back next year, I guarantee this will not be the last time that Boston University is in the championship game,’’ Lorms said.