THIS STORY HAS BEEN FORMATTED FOR EASY PRINTING
Stanford 71, UConn 59 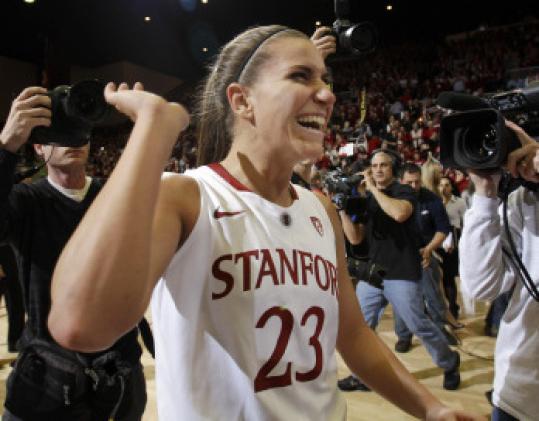 STANFORD, Calif. — Kelly Faris launched one more futile 3-point attempt, the basketball equivalent of spitting into the ocean. Of course, it drew iron — the 41st missed field goal on the night for Connecticut. Stanford’s Jeanette Pohlen came down with the rebound, turned around, and hurled the basketball to the heavens.

And with that, the top-ranked Huskies’ record 90-game winning streak was over. Stanford played a gutty, gritty game last night, with just enough offense to pull out a 71-59 victory. After the postgame handshakes, the UConn players jogged off the court to the locker room, as if it was any other game. The No. 9 Cardinal, celebrating at center court in front of a sellout Maples Pavilion crowd of 7,329, clearly knew it was something more.

“This losing stuff is getting old,’’ UConn coach Geno Auriemma joked to open his postgame news conference. “I hate it. I just wish we could catch a break for once.’’

On this night at least, the better team won. Pohlen looked all-world, scoring a career-high 31 points, grabbing 9 rebounds, and handing out 6 assists. Stanford shot better, rebounded better, and passed better. The Cardinal (9-2) led from the beginning — a Pohlen 3-pointer started the scoring — and held a double-digit lead for much of the night.

“Disappointed is the right word, but not disappointed that we lost,’’ Auriemma said. “There’s a sense of disappointment that we didn’t play well.’’

Still, UConn went on an 11-2 run to end the first half, leaving Stanford with a 34-30 lead. That was the scary moment for the Cardinal, the last team to hold a halftime lead over the Huskies. That came last April in the NCAA championship game, 20-12. The Huskies rallied for a 53-47 victory.

Pohlen remembered, and spoke to her teammates at halftime.

This time, the lead was increased. By just after the midpoint of the second half, Stanford was up, 55-44. UConn (12-1) never could get enough going on offense to make a serious run.

“There’s been other times during this whole time where we didn’t play well,’’ Auriemma said. “It’s just that we haven’t faced anybody who played as good as Stanford played tonight.’’

The numbers during the streak were astounding. UConn won 88 of the 90 games by double figures; the average margin of victory was 33.4 points. Thirty-one of the victories came against teams ranked in the Top 25, with an average margin of victory of 24.9. The streak broke the Huskies’ own Division 1 women’s record of 70 in a row, set from 2001-03. It also broke the all-division women’s record of 81 consecutive wins, set by Washington University of St. Louis.

Freshman Chiney Ogwumike spent much of the night guarding Moore. It probably hindered Ogwumike’s offense — she came into the game averaging 11 points, and she finished with just 6 before fouling out.