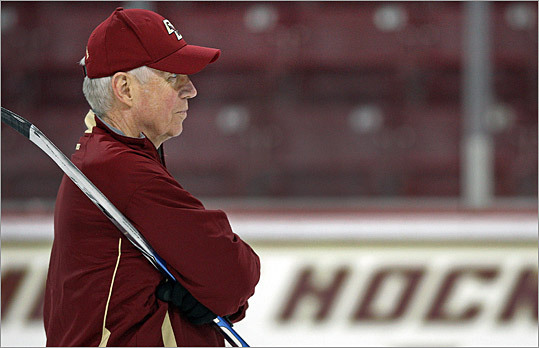 His wife insists that he has more than one jacket.

“He has a navy blazer and three black blazers, so they look the same,’’ Bobbie York says. “I bought him that nice brown blazer, but his brothers were giving him grief about it.’’

Boston College’s hockey coach has more than one sweater, too. It’s just that after 18 years behind the bench, the portrait of Jerry York might as well be a still life by now.

His expression is calm, eyes focused on the ice, hand holding a spiral notebook. Whether his Eagles are two goals up or two goals down, York appears eternally unruffled, as though he is emceeing a communion breakfast.

This week in Tampa, where his top-ranked varsity - winner of its last 17 games - will be playing for its third national championship in five years, his players know that he’ll be the same as he ever was, which gives them comfort and confidence.

“He’s so positive, and calm and collected,’’ says captain Tommy Cross, “and I think that rubs off on our team.’’

Yet York’s choir-boy countenance, which makes him appear a decade younger than his 66 years, masks a fierce competitive drive.

“He gives you that apple-pie demeanor,’’ says Bill O’Flaherty, who was York’s assistant at Clarkson. “But he can be pretty feisty and fiery when the situation calls for it.’’

On game days, York zeroes in like a raptor.

“He’s wound tight and he wants to win, but it’s all inside,’’ says athletic director Gene DeFilippo. “He does a tremendous job of not showing it, but inside he has a fire burning more than anyone I know.’’

The angriest Bobbie has ever seen him, she says, was when the NCAA selectors left his 1983 Bowling Green team out of the tournament.

“He took a dozen doughnuts, squished them, and threw them in the wastebasket,’’ she recalls.

“I think they were jelly,’’ muses York, whose squad won the title a year later.

Yet behind the dasher, the man is almost spookily sanguine, especially when the game is on the line.

“Jerry has always been very calm on the bench,’’ says Boston University coach and friendly archrival Jack Parker, who played against York in high school and college. “He’s almost soothing to his players when things go wrong.’’

York was never more so than in the 2008 regional final against Miami of Ohio when his squad was under siege in overtime with the season on the line. York called a timeout and convened his players.

Joe Whitney got them the goal, and two games later, the Eagles had the national title.

“One of Jerry’s great traits is not hitting the panic button, and I think his players sense that,’’ says Jim Logue, who coaches BC’s goalies and who roomed with York when they tried out for the 1968 Olympic team.

York is a relentless optimist who is determined to keep his players in the moment. Each year, he has his freshmen read excerpts from “The Precious Present’’ to their teammates.

What you do today may determine what you do tomorrow. That’s was York’s approach in 2005, when he was told that he had prostate cancer.

“I was scared to death,’’ he says. But he immediately began preparing for surgery.

“He was unbelievable,’’ Bobbie recalls. “He’s such a baby when he has a cold, but he went after that like it was a hockey game. He got in shape to make sure he was healthy and ready to go. It was amazing how good he was.’’

His optimism and let’s-do-it approach were sorely needed when York took over the BC program in 1994. BC had gone into a tailspin, posting three consecutive losing seasons for the first time. But York was delighted to come home both to The Heights and to Watertown, where his family roots go back more than a century and a half.

His grandfather William was born there in 1858 and his father Robert was a doctor whose office was on the first floor of their Victorian on Mount Auburn Street, where industrial workers with lacerated hands would ring the doorbell.

“One of those Marcus Welby things,’’ York recalls.

“Every meal would be an event,’’ recalls York, who was seventh in line and was named Jeremiah after Bishop Minihan, his father’s Georgetown pal. “The milk or something would go over.’’

York took the trackless trolley and subway to BC High and walked on at BC, where he played on the 1965 team that made the NCAA final, then went on to captain the squad and make first-team All-American.

It was inevitable, his friends say, that “Yorkie’’ eventually would be drawn back not only to his alma mater but to his hometown.

By now he could have upgraded to a Chestnut Hill manse, but York lives not far from where skated on the frozen tennis courts at Victory Field. Every morning he fetches his morning coffee and the papers at the same Dunkin’ Donuts. His favorite restaurant is Porcini’s on School Street, where he is partial to the beet and goat cheese salad with chicken.

And he loves hot fudge sundaes at Brigham’s.

“It broke his heart when they closed the one on Belmont Street,’’ says Norton.

His old BC coach, who died more than 25 years ago, universally was called “Snooks,’’ but York still can’t bring himself to use the nickname. It’s Coach Kelley.

“Jerry has a lot of old-school in him,’’ says O’Flaherty, who still chats with York frequently. “And there’s nothing wrong with that.’’

Old-school values are at the core of BC’s hockey culture, whose essence is the imperative of representing the college with dignity and class. While his players are expected to keep their faces shaved and hair trimmed and to wear coats and ties on road trips, York does not subject them to a litany of Thou Shalt Nots.

“We have one basic rule - don’t embarrass the program,’’ says associate head coach Mike Cavanaugh, who coached with York at Bowling Green. “That says enough.’’

Respect for teammates and the rest of the BC community is paramount to York, which is why the Eagles are punctiliously punctual. The bus has been known to leave stragglers stranded in Orono, Maine.

“In my four years here, I think three times someone’s been late for a meeting,’’ reckons Cross. “And those three times it wasn’t pretty and the person wasn’t included in the meeting.’’

York is big on inclusion.

“Our kids know our custodian’s name - Harvey - and Jerry makes sure they know it,’’ says Cavanaugh.

And if a player were to give Harvey attitude, he’d be in trouble.

“If Jerry got a report that one of the kids was disrespectful to someone working in the lunch room or to the Zamboni driver, that would send him over the edge,’’ Cavanaugh says. “Or if one of our kids ever tried to play the card, ‘Hey, I’m a hockey player,’ that would send him off. You’re just one member of the Boston College community and we’re all equal.’’

York rarely has to drill home his points, which he’ll reinforce with wry humor. If a player shows up with a fuzzy chin, the coach might observe that Gillette just came out with something new.

At last week’s NCAA regionals in Worcester, BC’s rivals from defending champion Duluth turned up looking as though they’d just emerged from a hunting trip in the Minnesota wild, sporting playoff beards and Mohawk haircuts.

The Eagles don’t do hirsute.

“Never,’’ says Cross. “That would not be allowed. There are certain things that are staples of the program. Being clean-cut is part of the bigger picture about representing the university the right way.’’

By now the culture is so embedded that the players themselves largely take care of reinforcing it. York didn’t have to tell them that they should stand at attention at the blue line until a few seconds after the end of the anthem, as they unerringly do.

“When I came in as a freshman I was looking to my right at Nick Petrecki and my left at Carl Sneep,’’ says Cross. “They didn’t move, so I didn’t move.’’

York is a big believer in continuity and connectedness, which is why he’ll bring back former stars such as Brian Gionta to talk to his team.

“Once an Eagle, always an Eagle,’’ reads the sign in the dressing room hallway. York also invites in local professional coaching icons such as Bill Belichick, Doc Rivers, and Terry Francona to share time-tested verities - trust and accountability, teamwork and togetherness, hard work and consistency.

“They brought some uniqueness to it,’’ says York, who takes notes on the talks and keeps them in a binder. “They’ve been spellbinding.’’

What the Patriots, Celtics, and Red Sox have in common are championship rings, which is what York habitually stresses to his players. The best student-athletes graduate and they win titles.

What is most significant about trophies, York believes, is that everyone on the squad has his fingerprints on them. On his office wall hang photos from the White House visits by the 2008 and 2010 national championship teams, which include everyone from the captain to the fourth-liner in the picture.

What’s notable about the season’s schedule that the players see is that it’s been flip-flopped, with the opening game at the bottom and the championship game at the top. As often as not, BC reaches the apex. In the nine previous times they’ve reached the Frozen Four under York, the Eagles have played seven times for the title and won three.

His BC teams have been soaring for so long that their success has been taken for granted. When they’re playing golf with alums, DeFilippo makes a point of poking fun at York when he steps into the tee box.

“If we get any coaching at all next year,’’ the athletic director will proclaim, “we’ll be in the Frozen Four.’’

York is the Archbishop of April, his varsity still playing when most of the rivals are swinging golf clubs. No college coach ever has won 1,000 games but York, who is at 911 and counting, isn’t likely to put his blazer, sweater, and tie into cold storage any time soon.