THIS STORY HAS BEEN FORMATTED FOR EASY PRINTING
BU 5, UNH 4 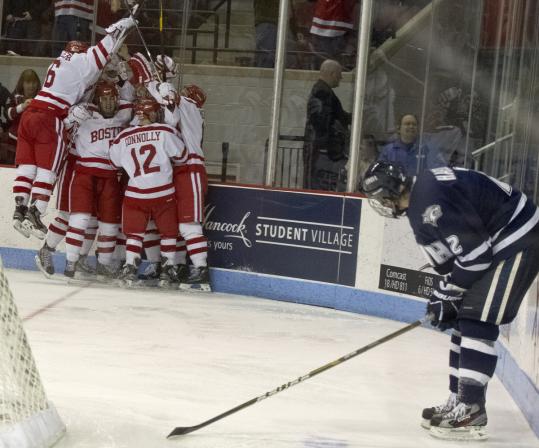 When captain Mike Borisenok scored a shorthanded goal for No. 6 seed New Hampshire at 4:34 of the second period Sunday night, giving the Wildcats a 4-1 lead, Boston University coach Jack Parker had seen enough.

The veteran bench boss called a timeout and gave it to his team in animated fashion.

The third-seeded Terriers responded, tying up the deciding game of the best-of-three Hockey East quarterfinal series, then won it, 5-4, on Alex Chiasson’s goal at 6:42 of the second overtime in the longest game ever at Agganis Arena. The previous record was set Friday night in Game 1 (82 minutes).

BU goaltender Kieran Millan broke the record for saves in a league quarterfinal game with a career-high 68, six better than Merrimack’s Joe Exter in 2002.

Parker said he told his team it was playing like it did on Friday, when the Terriers dropped a 3-2 double-overtime decision.

“I said, ‘You’ve got to, sooner or later, stop and start this game all over again because you look exactly like you were playing Friday night. You look like you’re lost, you look like you’re inept, you don’t know where you’re going. Let’s get going here, boys!’ ’’ said Parker.

Not long after he lit a fire under them, the Terriers got it going.

BU actually had the early lead, scoring at 4:11 of the opening period on its first shot.

Freshman right wing Evan Rodrigues took a pass from Matt Nieto, cut to the center from the left circle, and fired a shot past freshman Casey DeSmith (50 saves) from just outside the right post.

Freshman left wing Casey Thrush potted his first of two to tie it at 8:09. Thrush, showing great perseverance, jammed at the puck several times before getting it by Millan. At 14:30, Thrush struck again, beating Millan from the left circle for a 2-1 lead.

At 1:42 of the second, the Wildcats extended the advantage with a power-play strike by junior center Greg Burke.

They made it a three-goal edge at 4:34 on the shorthander by Borisenok, who took a long lead pass from Kevin McCarey and scored on a breakaway.

After Parker’s timeout, the Terriers quickly rallied to within a goal.

Noonan’s first was set up by Chris Connolly, who found Noonan in the left circle. His second came during a scramble in front when Justin Courtnall took a shot that wound up between DeSmith’s pads. Noonan saw the loose puck and jammed it home.

BU fought all the way back 30 seconds into the third, set up by Noonan. He fed junior left wing Wade Megan in the slot, and Megan beat DeSmith for his 19th of the season.

The Terriers nearly scored again with 7:37 left in regulation when junior left wing Ross Gaudet fired a shot from the left circle that rattled off the right post.

UNH had a prime scoring chance with 3:32 remaining during a two-on-one when junior center Scott Pavelski fired from the right circle, but Millan gloved the Wildcats’ 50th shot.

The teams combined for 30 shots in the first overtime, but the goaltenders wouldn’t yield.

In the second overtime, Chiasson collected the rebound of a Megan shot and beat DeSmith, sending BU to the league semifinals against Maine (a 2-1 winner over Merrimack) and ending UNH’s season.

“I told them in the locker room, I’ve had some teams that have gone a lot further . . . but they haven’t had the grit and determination this team has had,’’ said UNH coach Dick Umile, whose 500th career victory will have to wait until next season. “That being said, it’s a tough one to take because of how hard they played and the chances that we had.’’