THIS STORY HAS BEEN FORMATTED FOR EASY PRINTING
BC 2, UMass 1

After a blackout, BC sees the light 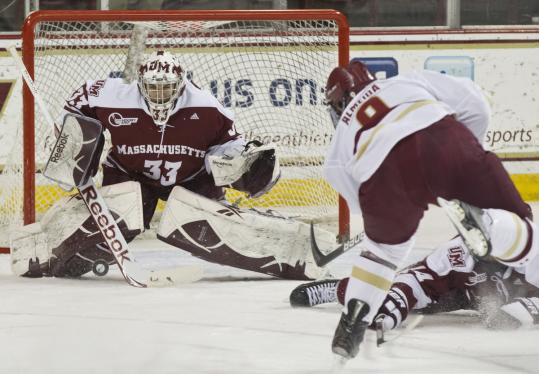 The University of Massachusetts, seeded eighth in the Hockey East quarterfinals, knew it would have its hands full Friday night with Boston College in the opening of their best-of-three quarterfinal series at Conte Forum.

The top-seeded Eagles came in riding an 11-game winning streak and were the league’s regular-season champions.

Despite the best efforts of the impressive Minutemen, BC prevailed, 2-1, with both of its goals coming in a 39-second span of the second period. Game 2 is tonight.

“You could just feel the type of playoff intensity out of both teams,’’ said BC coach Jerry York, whose team was given a pep talk Thursday by Celtics coach Doc Rivers. “Both of our teams were disciplined. It was mostly five on five and every shift was a battle out there.’’

The most memorable part of the opening period was a 21-minute delay at the 8:59 mark because the lights went out in the arena and in the nearby buildings.

Both teams adjourned to the locker rooms until power was restored and play resumed.

Neither team could make a dent, though, with BC putting 10 shots on UMass freshman netminder Kevin Boyle (16 saves) and UMass firing seven on BC junior goaltender Parker Milner (25 saves).

The play was crisp on both sides and neither was called for a penalty.

In the middle period, the Minutemen thought they were on the board at 10:01 when freshman center Steven Guzzo accepted a pass and knocked the puck past Milner from just outside the right post. But when the play was reviewed, it was ruled Guzzo directed the puck into the net with his skate and the score was nullified.

That decision seemed to buoy BC, which turned it up a full notch.

“That seemed to give us a little bit of life,’’ said York.

UMass coach Don Cahoon was disappointed about the disallowed goal, particularly given how costly it proved to be.

“The referees called that what they felt according to the book,’’ he said. “The book says if there is any question, it’s a no-goal situation. So they felt there was enough question as to whether it was directed or not. So they called it the way they saw it.

The Minutemen (13-17-5) got another chance when they were awarded the only power play of the contest at 12:01. With sophomore center Bill Arnold off for holding, the visitors went to work. Their best opportunity came with 45 seconds left on the man advantage. Guzzo had a bid from the top of the crease, but Milner made a terrific glove save.

BC’s penalty killing has made it very hard on opposing teams. During the extended winning streak, the Eagles had killed 40 of 45 chances. Through the last six games, though, BC had killed 20 straight opposing power plays, extending that to 21 on UMass’s chance Friday night.

Despite the Minutemen’s fine play, the Eagles jumped out to a 2-0 lead late in the period.

At 17:46, freshman left wing Johnny Gaudreau started the flurry when he threw the puck down from the right circle to junior center Pat Mullane, who beat Boyle from in front for his seventh of the season.

“I think it was pretty fluky,’’ said Mullane. “Johnny Gaudreau made a nice pass back to me off the draw. I just tried to get it to the net. I think it hit the ice in front and bounced up top. So we were pretty fortunate. I thought it swung the momentum in our direction.’’

At 18:25, senior defenseman Tommy Cross scored the winner, firing from the top of the left circle for his fifth of the season. Gaudreau assisted on that one as well.

The Minuteman clawed back to within one at 6:55 of the third when Michael Marcou’s shot from the right-wing boards was deflected past Milner by senior right wing Danny Hobbs.