THIS STORY HAS BEEN FORMATTED FOR EASY PRINTING
BC 3, BU 2 (OT) 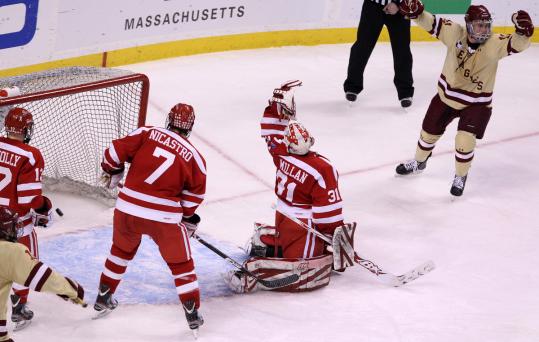 Harvard last won the Beanpot Tournament in 1993, Northeastern last won it in 1988, leading to speculation that interest had dwindled because every year it was either Boston College or Boston University taking home the hardware to Commonwealth Avenue.

But last night, the Eagles and Terriers turned in phenomenal performances in front of a rapt, soldout crowd at TD Garden. BC won its third straight crown, by a 3-2 score in overtime, for its 17th title in the 60-year history of the event.

"Over the last few years, people have talked about, `Has the Beanpot kind of lost its luster? How are the crowds? Where is college hockey in the Boston area?"' said BC coach Jerry York, who earned his 899th career victory. "Tonight was a statement. That place was jammed with fans of college hockey. I think the Beanpot is in good hands. It has been for a long time and it's going to continue especially with that type of hockey game tonight. That was college hockey at its finest."

The hero of the night was sophomore center Bill Arnold, who scored with 6.4 seconds remaining in the extra session.

It was BC's fourth title in the last five years. It marked the first time since 1963-65 that the Eagles won three in a row. And it's the first time that BU has failed to win a Beanpot title in three straight seasons since 1983-85.

Arnold's goal, the Needham native's 13th of the season, was on an odd-man rush. He beat BU goaltender Kieran Millan (44 saves) on a shot from the right circle that sailed past Millan's glove.

"I knew there was under a minute left," said Arnold. "I wasn't exactly sure how much time was left when we were skating up the ice. But you don't want to turn over the puck in that situation. You want to make sure you at least get through the period without giving up a goal. But if you see the chance to skate down the ice and get a shot, you've got to take it."

Barry Almeida found Steven Whitney, who dished the pass to the latecomer, which was Arnold, who finished off the play. Game over.

In their first three meetings this season, the decisions were all lopsided. BU won the first one, 5-0, and the second one, 5-3, but dropped the third one, 6-1.

But both squads expected a tight battle and that's exactly what they got.

BU put itself in trouble with penalties, allowing six power plays through 40 minutes.

With freshman left wing Quinn Smith off for boarding, junior right wing Chris Kreider made a terrific play to liberate the puck from BU defenseman Sean Escobedo. Kreider, who was playing in his 100th collegiate game, dished to Mullane in the left circle and Mullane's forehand wrister beat Millan to the short side after rattling off the post.

It was Mullane's fourth goal of the season, and the first shorthanded goal allowed by BU this season.

BU pulled even at 15:11 of the second during a power play. Sophomore defenseman Garrett Noonan made it 1-1 on a high shot from the left circle that eluded junior goaltender Parker Milner (32 saves).

Sophomore left wing Matt Nieto made a nifty feed from the right circle to find Noonan, who came in late. Milner couldn't correct in time and it was all tied up.

BC went back on top, 2-1, at 18:42 on Kreider's power-play tally. BU managed to kill off the 23-second five-on-three advantage but when it went to five on four, the Terriers couldn't kill it off.

Freshman left wing Johnny Gaudreau made a perfect centering pass to Kreider, who was charging into the slot. Kreider's shot beat Millan over the glove for his team-leading 19th goal.

BU battled back a second time during a two-man advantage at 7:12 of the third. Sophomore defenseman Adam Clendening, who was positioned in the high slot, found an open passing lane and threw the puck to Noonan, who was camped at the left post.

Noonan redirected it into the net past Milner for his first two-goal game.

Both teams had chances in the latter stages of the period but neither could finish the other off.

Last night marked the sixth time in nine years that the Beanpot championship had gone into the extra session, setting the stage for Arnold's heroics.

Millan was named the outstanding goaltender with a .948 save percentage and Gaudreau earned tournament MVP honors with two goals and two assists.

"I was really pleased with my team," said BU coach Jack Parker. "I loved how hard we competed tonight. A great game, a great effort, and a pretty thorough effort by both teams."