THIS STORY HAS BEEN FORMATTED FOR EASY PRINTING
BU 6, Providence 1 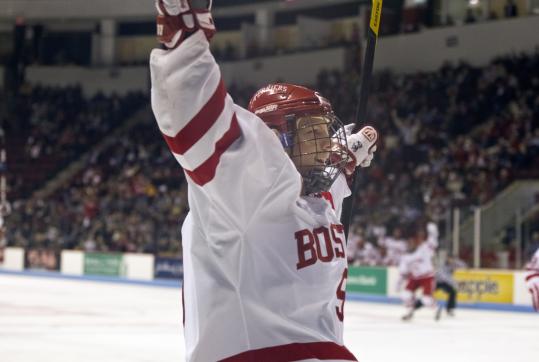 It was just the second game of the year when Boston University first squared off against new-look Providence, dropping a 5-3 decision at Schneider Arena Oct. 14.

Last night, when the teams met again in the first of a home-and-home series, the second-ranked Terriers had payback on their minds. They made their offensive opportunities count on their way to a 6-1 victory in front of 5,171 at Agganis Arena.

BU jumped out to a four-goal lead after one period, needing just 10 shots.

The Terriers didn’t waste any time getting on the board, scoring 1 minute 31 seconds into the action. Sophomore center Sahir Gill beat Alex Beaudry on a shot from the slot for his seventh tally of the season.

BU added its second goal at 10:40 when junior right wing Alex Chiasson teed up a slapper from the right point for his seventh of the year.

Junior right wing Ryan Santana made it a three-goal advantage on a strange score at 13:23. Beaudry came way out of the crease to chase the puck, but Santana managed to chip it over and behind the netminder and into the net for his first goal of the season.

That goal prompted Providence coach Nate Leaman to pull Beaudry in favor of senior Justin Gates, who was making his fourth appearance of the season.

The Terriers added their fourth goal at 14:43 when sophomore defenseman Adam Clendening delivered the puck from the right point and sophomore left wing Matt Nieto tipped it past Gates for his ninth of the year. Clendening finished with a career-high three assists and has 11 in his last five games.

The Friars broke the shutout at 8:59 of the second period, just two seconds after their power play expired. It was freshman center Shane Luke who delivered, beating Kieran Millan for his first collegiate goal from just outside the right post.

“They get 37 shots and yet we outshoot them [by two], that’s a pretty good night for us, as far as our offensive output was concerned.

“We had the puck going in the net for us tonight. I thought my team played great for almost the entire game.’’

Providence (9-10-2, 7-6-1) played a much stronger period in the second, outshooting BU, 20-11. But BU took advantage of a major penalty on the Friars in the third to put the game out of reach.

At 4:14, senior defenseman Daniel New was assessed a five-minute major and game misconduct for hitting Chiasson from behind.

Just 42 seconds later, the Terriers got their first of two goals during the extended power play.

Junior left wing Wade Megan made a nifty pass from the right side to freshman defenseman Alexx Privitera, who beat Gates on a one-timer to make it 5-1.

At 7:02, the Terriers made it a runaway when sophomore defenseman Garrett Noonan gathered in a rebound and backhanded it past Gates for his seventh of the season.

“Four of their first six shots went in our net right from the get-go,’’ said Leaman, whose team was 0 for 7 on the power play. “We came out a little bit on our heels. At 2-0, I thought we had a couple real good chances and Kieran made some real good saves there.

“I thought we played a terrific second period. I was disappointed in our third period. I wasn’t happy with our compete level, but we’ll make some adjustments.’’

The Terriers are now 4-0 in 2012 and have earned victories in 11 of the last 13 contests despite losing two of their top scorers - Corey Trivino and Charlie Coyle after the first semester.

This is the first time the Terriers have been atop the league standings during the month of January since 2005.

The teams have a rematch tonight at Schneider Arena.