THIS STORY HAS BEEN FORMATTED FOR EASY PRINTING
BU 4, NU 3 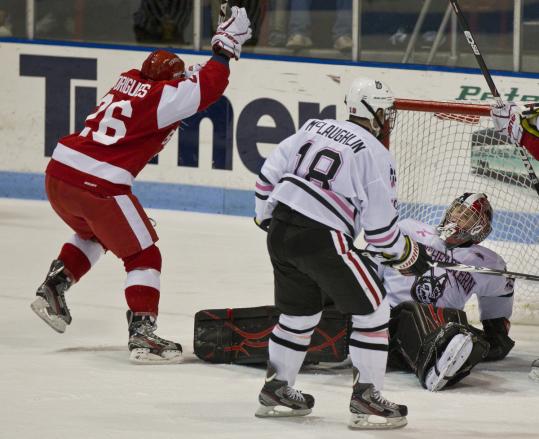 When Northeastern and No. 6 Boston University went into last night’s Hockey East showdown at Matthews Arena, they were two of the hottest teams in the country with a combined 15-2-1 record since Nov. 13.

It was their first meeting of the season and both programs considered it a litmus test for where they were in their respective seasons.

“It feels pretty good,’’ said BU coach Jack Parker. “At the break, I thought we were really playing well. I thought we might have been one of the top five teams in the nation the way we were playing. There’s a long way to go before the home ice is determined. I’d rather be in first than in seventh trying to make home ice.’’

The first period belonged to the home team. Both teams came out flying but in the opening 20 minutes, it was Northeastern that managed a pair of goals, both of which came in the final two minutes.

With 1:22 remaining, Alex Tuckerman put the Huskies on the board with his second tally of the season. Defenseman Drew Ellement started the play with a shot from the left point. A couple of players had swipes at the puck from in front after goaltender Kieran Millan made the initial stop, but it was Tuckerman who got his stick on the puck and backhanded in the rebound from just outside the left post.

The Huskies doubled their lead with 26.7 seconds left. BU center Chris Connolly turned over the puck in his zone in the left circle. Ludwig Karlsson pounced on it in the slot and fired it past Millan for his seventh strike of the year.

If Northeastern looked to be in good shape, that all changed in the second when the Terriers potted three straight goals to take the lead.

The tallies came in a span of 3 minutes 28 seconds.

The rally started on a goal by Adam Clendening, who fired a shot from the right point that beat Chris Rawlings through a screen inside the near post to make it 2-1 at 8:23.

The Terriers pulled even at 9:20 when Ryan Santana generated a chance because of his strong forechecking behind the Northeastern net. He dished a centering pass to Wade Megan, who potted his first of two.

BU’s third goal came during a power play after freshman Josh Manson was ejected for contact to the head on BU’s Matt Nieto, which earned him a five-minute major penalty and game misconduct.

Alexx Privitera whipped the puck toward the net from the top of the left circle and freshman Evan Rodrigues tipped it past Rawlings for his first collegiate goal at 11:51 to give BU the lead for good.

Megan’s second tally of the night came during another BU power play early in the third. With Steve Quailer off for slashing at 1:24, the Terriers needed less than a half minute to cash in.

Alex Chiasson found Megan in the right circle and he fired a shot past Rawlings to produce the two-goal lead at 1:52.

NU coach Jim Madigan was pleased with his team’s first period, but was disappointed in its lack of discipline.

“The five-minute major I thought was a change,’’ he said. “We let them back in the game on a couple of poor plays down low. We had too many penalties the second and third period for our liking and that’s a team that has a lot of skill on the power play.’’

NU had a chance to climb back into it when the Huskies had a two-man advantage for a full two minutes when both Privitera and Yasin Cisse were assessed cross-checking penalties but they couldn’t produce anything in that span.

NU did pull within one during a power play with 3:07 remaining in regulation when Karlsson earned his second of the night on a shot from the top left circle.

But that was as close as the Huskies would come.