THIS STORY HAS BEEN FORMATTED FOR EASY PRINTING
BC 6, UMass-Lowell 3 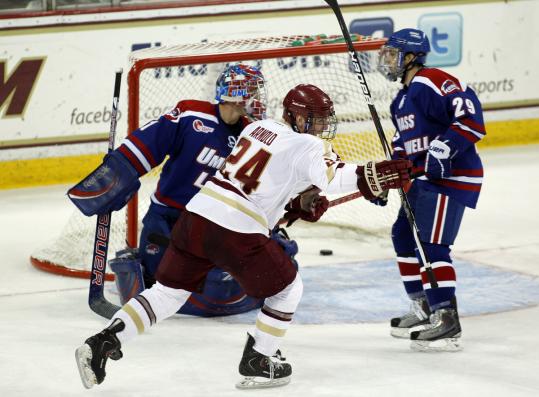 Boston College continued its winning ways last night with a decisive 6-3 victory over visiting UMass-Lowell, which completed the top-ranked team’s weekend sweep of the River Hawks.

On Friday night, coach Norm Bazin went with sophomore Doug Carr, who made 16 saves and gave up three goals in a 4-2 loss. Last night, he started freshman Brian Robbins, who was replaced by sophomore Marc Boulanger after giving up four goals on 13 shots in the first period. In his first action of the season, Boulanger gave up two goals on 11 shots.

With a crowd of 4,207 on hand at Conte Forum, BC had the game well in hand early. The Eagles scored 4:34 into the opening frame with senior right wing Barry Almeida dishing a centering pass to freshman center Destry Straight, who rapped home his first goal.

Freshman left wing Johnny Gaudreau, who continued to impress, made it 2-0 at 6:37 when he snapped a shot over Robbins’s glove from the left circle for his fifth goal of the year.

The River Hawks cut the deficit in half at 9:44 when they took advantage of a miscue by BC junior netminder Parker Milner. Milner made the initial stop on sophomore defenseman Daniel Furlong but he dropped the puck straight down and freshman left wing Scott Wilson punched it through for his first tally.

At 11:23, the Eagles regained a two-goal lead when junior center Pat Mullane found junior right wing Steven Whitney with a cross-ice pass and Whitney buried a one-timer from the left circle.

Junior left wing Chris Kreider made it a 4-1 game at 16:57 when he took a pass from sophomore right wing Kevin Hayes and skated in from the left circle, beating Robbins and prompting Bazin to make a goalie change.

“He was left out to dry,’’ said Bazin. “I took him out simply because I felt bad for the kid.’’

Kreider cashed in again at 1:33 of the second period during a power play. At 14:07, BC’s special teams came through for a third time with a shorthanded goal. Kreider set up the score with a quick pass to sophomore pivot Bill Arnold, who beat Boulanger from below the left circle to make it 6-1.

The River Hawks staged a mini-comeback in the third when they scored a pair of goals less than two minutes apart to cut the deficit to 6-3. Sophomore right wing Josh Holmstrom started it at 3:32 and sophomore right wing Joseph Pendenza raced down the right side before cutting in on Milner and scoring from the doorstep at 5:16.

BC coach Jerry York said the team is happy with its record but far from satisfied.

“Our club’s off to an excellent start,’’ he said. “But there’s still a lot of improvement we expect to make in a wide variety of areas. We accept the fact we’ve had a good start but we’ve got to push forward and just get better as a club.’’

Bazin said his team needs to be better, and will be.

“I wish we came out with a little bit more urgency,’’ he said. “Tonight wasn’t good enough. This was not an effort we’re going to be looking back on fondly in any way.’’