THIS STORY HAS BEEN FORMATTED FOR EASY PRINTING
NU 5, BU 4

NU refuses to go away 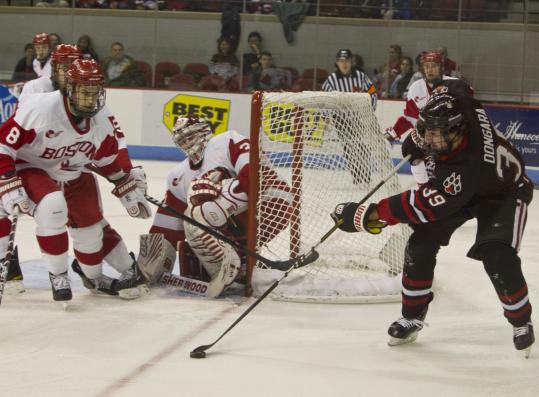 This is why nobody wanted any part of these people in the playoffs. Northeastern’s hockey team won one of its first 11 games and still kept showing up for work. Their coach was suspended for the final six games of the regular season and the Huskies went 2-2-2 against Boston College, New Hampshire, and Boston University. And now these Huskies, who are built for the Iditarod distance, are going to the Garden for yet another meeting with the reigning national champions.

“It’s a great win for our university and particularly for our seniors,’’ NU coach Greg Cronin declared last night after his sixth-seeded varsity (14-15-8) held off third-seeded BU, 5-4, at Agganis Arena to win the finale of their best-of-three Hockey East quarterfinal series.

Northeastern, which had not won at Agganis since 2005, now has won three of its last four there. “The word that keeps getting tossed around is unflappable,’’ said Cronin. “That’s the way they were this series.’’

For the third time the Huskies scored first, with freshman Cody Ferriero connecting on the power play at 9:30, and when classmate Brodie Reid, who had two goals and an assist in the clincher, snapped a wrister past goalie Kieran Millan at 11:40, the Terriers were trailing, 2-0, and in danger of being shut down for the winter.

Before things got out of hand Matt Nieto jump-started his mates, redirecting Adam Clendening’s power-play wrister from the left point past goalie Chris Rawlings at 15:27. But BU needed a bit of luck to escape the first period down by only a goal when Wade MacLeod had a man-up bid in the final minute with Millan out of the cage. The puck bounced off defenseman Max Nicastro’s skate in the crease and skipped away.

A bit of miscounting gave the hosts a chance to draw even when NU was penalized for too many men early in the second period but the Terriers made nothing of it. In fact, the Terriers’ best chance came shorthanded while they were killing a 4-on-3 penalty and Joe Pereira, who’d scored twice in the second game, swooped in on a semi-breakaway. But Rawlings (31 saves) denied him and BU went into the final period still down, 2-1, with the season in the balance.

The Terriers had an early opportunity when Ferriero was whistled off and was buzzing the Northeastern goal when Alex Chiasson took a costly penalty for hitting from behind that eventually put the visitors on the power play. One second before it expired Steve Silva tipped Reid’s slapper past Millan and the Huskies took a 3-1 lead at 6:48.

Chiasson made up for his malfeasance two minutes later, though, popping a power-play goal through the underbrush just seconds after being knocked down in the scrum. As the clock ticked down BU took control, pinning NU in its own end for several minutes. But when the Huskies finally broke out they went for the throat, with Rob Dongara making a deft passout to an unaccompanied Reid, who ripped it past Millan to make it 4-2 with 5:21 to play.

So Parker had no choice but to pull Millan for an extra skater with 3:08 left and MacLeod added a celebratory tally at 17:46. But the Terriers, who’d come back from the dead to beat Miami for the national title in 2009, still had some bite in them. Justin Courtnall scored at 18:38 and Wade Megan added another on the power play at 19:46 but the Huntington Hounds hung on. “Lots of people doubted us,’’ observed Reid, “but we battled through and got it done.’’