THIS STORY HAS BEEN FORMATTED FOR EASY PRINTING
BU 3, Vermont 3

Catamounts roar back to salvage tie 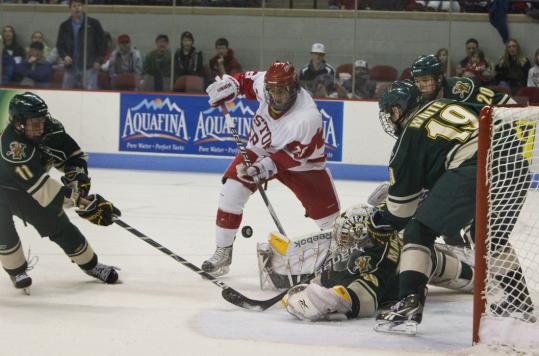 Boston University had been on a healthy run heading into last night’s game against Vermont.

The Terriers, who are ranked No. 15 in the nation, were unbeaten in their last seven Hockey East contests (6-0-1). But in their home rink — Agganis Arena — they had enjoyed little success against the Catamounts.

Over the past three seasons, the Terriers had gone winless in four outings (0-2-2). The last time BU had beaten Vermont was March 10, 2007, in the third and decisive game of the league quarterfinals. Vermont proved to be a thorn in BU’s side yet again last night when it rallied from a three-goal deficit to earn a 3-3 tie in front of 4,418 stunned fans who watched the Catamounts score three times in the third period.

“I’m real proud of our team and how they performed at the end of the game,’’ said Vermont coach Kevin Sneddon. “There are good ties and there are bad ties, and tonight was a good tie for us. It’s an important point, down, 3-0, in a tough building against a great team.’’

The Terriers, who were without defenseman David Warsofsky because of a concussion suffered last Saturday night late in a game at Providence, went ahead with a goal at 16:40 of the opening period. Jack Downing tried to clear the puck out of the Vermont zone but his delivery was intercepted by freshman center Sahir Gill in the slot. Gill charged the net and deked junior goalie Rob Madore (43 saves) before tucking in a shot from just outside the left post.

It was Gill’s fifth tally of the season and first since Nov. 20 against New Hampshire. The rookie had gone 20 games without a goal.

Vermont had an opportunity to pull even with a power play that begin late in the first and extended into the second, but couldn’t generate anything.

BU nearly got a second goal at 5:01 of the second during the man advantage when Alex Chiasson had a bid from deep in the left circle, but Madore snared it with his glove. The Terriers did score at 12:52 when freshman defenseman Adam Clendening sent the puck at the net from outside the right post. The puck appeared to go through the crease and out the other side, but after a lengthy video review it was determined that it indeed crossed the goal line, and BU was up, 2-0.

Gill nearly had his second goal of the contest with 1:02 left when he snapped a shot on net from the right circle, but Madore made the stop.

BU added a third goal at 5:33 of the third. Justin Courtnall tried to beat Madore on a wraparound at the right post, but the puck hit off Madore and squirted out in front. Ben Rosen rapped it home for the 3-0 lead. It appeared the Terriers were in command, but Vermont had other ideas.

Sophomore defenseman Anders Franzon broke up the shutout to start the comeback at 6:37 when he scored on Kieran Millan (38 saves) during four-on-four play. It was his third goal of the season, and the first of three straight goals scored by Catamount blue liners.

The second came at 12:57 by junior Drew MacKenzie, and Vermont fought all the way back at 13:29 on a strike by junior Lance Herrington, who potted his first collegiate goal with a shot from the slot. “I felt bad [because] once again, Kieran Millan gave us a great night and deserved a better fate,’’ said BU coach Jack Parker, who thought his team played pretty well for most of the game. “In reality, we made three huge mistakes that gave them three goals. This club has a tendency to relax sometimes when they get up, and it’s never over. Especially against us, they play us harder than they play anybody in this league, I think. Vermont made sure they kept coming for 60 minutes.’’