THIS STORY HAS BEEN FORMATTED FOR EASY PRINTING
BU 2, Providence 1 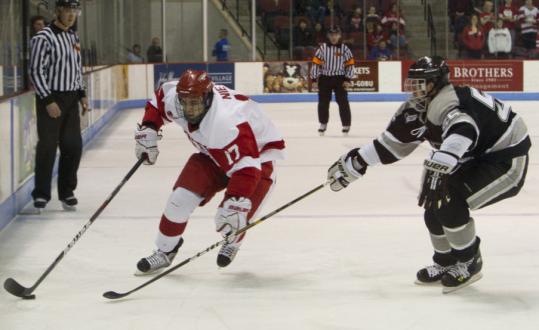 Providence defenseman Daniel New tries to pinch in on Matt Nieto, who put BU on the board in the first period with his seventh goal of the season. (Matthew J. Lee/Globe Staff)
By Nancy Marrapese-Burrell Globe Staff / February 19, 2011

The sting of Monday’s loss to Harvard in the Beanpot consolation game was still there. Boston University, ranked No. 15 in the country, needed a strong showing after finishing fourth in an event they own almost annually.

It was just the fourth time in the Beanpot’s 59-year history that the Terriers finished fourth, the first time since 1980, so BU was determined to make somebody pay.

Last night, that somebody was Providence College. BU scored once in each of the first two periods and withstood a Friars surge late in the third on the way to a 2-1 victory in front of 4,643 at Agganis Arena. The Terriers improved to 15-9-7 overall and 12-5-5 in Hockey East. Providence, which hasn’t won since Dec. 11, dropped to 7-15-7 and 3-13-6. The Friars have gone 0-9-2 since their last victory.

“I thought we played great the first half of the game,’’ said Parker. “The first period we were terrific with the puck, moving the puck and making plays. We got another goal and it was 2-0 halfway through the second, and then we just kind of drifted away from what we were supposed to do. We took some stupid penalties at the end and gave them a chance to get back in the game. And if it wasn’t for Kieran Millan, once again, we would’ve lost that game.’’

The Terriers took a 1-0 lead into the first intermission. Sophomore right wing Alex Chiasson had the puck behind the Friars’ net, with PC sophomore Tim Schaller giving chase. Chiasson darted near the left post and centered a pass to freshman left wing Matt Nieto in the slot. Nieto rapped it past junior netminder Alex Beaudry (32 saves) at 4:34 for his seventh goal of the season.

BU doubled its lead at 9:38 of the second during a power play. With senior Ben Farrer off for boarding, the Terriers won a faceoff in the Friars’ zone and the puck went back to freshman blue liner Adam Clendening at the right point. Clendening took a stride toward the middle and fired a shot that eluded Beaudry. It was Clendening’s fourth goal of the season.

The Friars had a chance to get on the board in the latter stages of the third period, when they had a power play following a scuffle, but Millan (36 saves) held them at bay. He couldn’t stop a second barrage, though. With two seconds left on another power play, senior left wing Ian O’Connor scored from the doorstep at 18:34. But that was as close as Providence could get.

“We’ve played a lot of tight games this year,’’ said PC coach Tim Army. “We’ve played 10 overtime games. I just told the kids I was really proud of their effort. I thought they played really well and at some point in time, one of these games has to bounce our way.

“From our standpoint, we’ve just got to keep plugging and keep pushing. If we keep working and doing things right, one of these games has got to break our way.’’

BU’s penalties almost made it happen. All 12 of the Terriers’ penalty minutes came in the third period.

“It was hard to decide which was most stupid,’’ Parker said. “Clendening’s might have been the least stupid. [Wade] Megan’s [for instigating and roughing] and Chiasson’s penalties [for roughing and hitting after the whistle] were absolutely as dumb as it gets.

“I have no idea what started it. No need for any of that.’’