THIS STORY HAS BEEN FORMATTED FOR EASY PRINTING
BU 5, Harvard 2

Crimson are left in the dust by BU 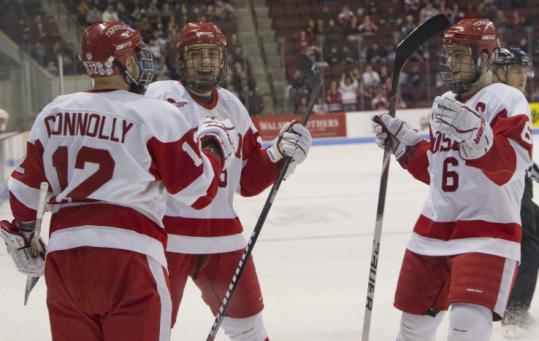 BU’s Chris Connolly fired up his teammates with the Terriers’ first goal, and he added another in the second period. (Matthew J. Lee/Globe Staff)
By Nancy Marrapese-Burrell Globe Staff / January 16, 2011

Last season, it took Boston University until Feb. 1 to reach the 10-victory mark. That win came during the Beanpot semifinals against Northeastern.

Last night, against another Beanpot team, the 16th-ranked Terriers improved to 10-5-6 with a 5-2 triumph over Harvard at Agganis Arena in front of 5,864. The Crimson continued their seasonlong struggles, dropping to 3-12-0.

“I was pleased from the get-go how we played,’’ said BU coach Jack Parker. “I thought we were pretty thorough. I thought we had to really come up with a good game to get by these guys because they’re hungry for a win, obviously. I was very, very pleased with just about everybody in the lineup playing pretty sharp.’’

The Terriers’ first goal came at 11:41 of the first period during a power play. Junior left wing Chris Connolly took a cross-ice pass from freshman defenseman Adam Clendening and one-timed a shot from the right circle that beat senior netminder Kyle Richter (32 saves).

Sophomore right wing Wade Megan boosted the lead at 1:57 of the second. With BU applying heavy pressure in the Crimson zone, sophomore defenseman Sean Escobedo had two bids from the low slot that Richter stopped. But the second save led to a rebound and Megan buried it for his fourth tally of the season.

Harvard cut the lead in half at 4:02 when senior right wing Michael Biega fired the puck from the left boards to sophomore left wing Marshall Everson. Everson, who was positioned outside the right post, rapped the puck past junior goalie Kieran Millan (31 saves).

BU’s next two goals came off turnovers. At 13:29 of the second, the Terriers cashed in shorthanded when Harvard sophomore left wing Conor Morrison tried to complete a pass to sophomore defenseman Danny Biega in the attacking zone. But Connolly intercepted the puck and took off the other way, beating Richter over the glove.

It was the first shorthanded goal Harvard has surrendered this season, and it gave Connolly his first two-goal game since Nov. 14, 2009, against Merrimack.

At the 23-second mark of the third, BU capitalized on an error in the Harvard zone. Junior center Alex Killorn lost control of the puck and BU senior right wing Joe Pereira pounced on it and wristed a shot past Richter.

The Crimson had a chance to chip away at the three-goal deficit when BU freshman blue liner Garrett Noonan was given a five-minute major penalty and game misconduct for elbowing at 1:07, but Harvard couldn’t generate any scoring chances and the latter part of the power play was negated by a too-many-men-on-the-ice penalty.

Harvard got one back at 9:57 with each team skating four a side. Junior defenseman Ryan Grimshaw potted his first of the year, assisted by Killorn, who extended his point streak to 10 games.

BU senior goalie Adam Kraus saw his first action of the season, relieving Millan with 4:59 left. He made two saves.

“As a team, this is a game where we really beat ourselves,’’ said Harvard coach Ted Donato. “What was more disappointing in general was not that we make mistakes, because I think those happen. Maybe today they were a little bit more obvious. I think because we’ve lost too many games, our response to some of the mistakes probably hurt us more so or just as much as the mistakes. It’s something we have to get over.’’