THIS STORY HAS BEEN FORMATTED FOR EASY PRINTING
BC 9, BU 5 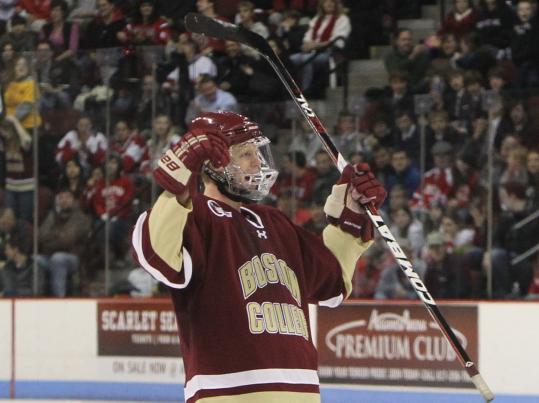 BC defenseman Philip Samuelsson raises his stick in celebration after scoring on a blast from the right point in the second period. (Matthew J. Lee/Globe Staff)
By Nancy Marrapese-Burrell Globe Staff / December 4, 2010

When Boston University was elevated to the No. 1 spot in the USCHO.com poll Nov. 8, coach Jack Parker could only shake his head.

The Terriers had tied Maine two days earlier, running their record to 6-0-2. After the game, based on what else had transpired across the country, it was obvious BU was going to be ranked No. 1, but Parker wasn’t buying it.

“We’re a pretty good team, but I don’t think we’re the No. 1 team in the nation,’’ Parker said at the time.

Last night, it was evident that the Terriers, now No. 2, still have lessons to be learned. In the opener of a weekend series against archrival and defending national champion Boston College, the eighth-ranked Eagles showed that experience and poise combined with talent amount to a significant trump card.

“We really played an extremely solid and very quick first period,’’ said BC coach Jerry York. “We had a lot of jump and we were able to get the quick lead. I thought that kind of set the tenor for the night.’’

The Eagles jumped out to a 2-0 lead in the first 2 1/2 minutes. Sophomore defenseman Brian Dumoulin started it when he sent the puck at the net from long range and Jimmy Hayes redirected it past Kieran Millan at 2:04 during a power play.

At 2:27, Paul Carey beat Millan on a knuckling shot from the middle of the right circle.

BC got its third of the period when Cam Atkinson one-timed it past Millan at 17:45. Grant Rollheiser replaced Millan to start the second period, but he fared worse.

Atkinson potted his second of the night at 2:29 during a power play. BU got on the board at 8:12 when freshman left wing Matt Nieto finished a two-on-one, beating John Muse (18 saves) on a wrister from the left circle.

The Eagles restored their four-goal lead at 12:58 while shorthanded when Barry Almeida darted into the right circle, cut through the slot, and lifted a shot over Rollheiser to make it 5-1.

BC cashed in on another power play at 15:32 when Philip Samuelsson beat Rollheiser from the right point.

BU closed to within 6-2 during a power play at 1:03 of the third when Joe Pereira rapped home a rebound from just outside the right post. But Chris Kreider answered at 6:10 during a four-on-four.

David Warsofsky scored BU’s third tally on an extra-attacker goal from the left point at 6:41, but Bill Arnold took advantage of a defensive miscue by BU at 9:40, beating Rollheiser for BC’s eighth goal.

The Terriers put together a late flurry with a power-play goal by Max Nicastro at the 15-minute mark and an even-strength goal by Andrew Glass at 15:13, but that was as close as they would come. Brian Gibbons closed the scoring with a goal on a penalty shot at the 16-minute mark.

York said one goal for his team when it plays again tonight at Conte Forum is to stay out of the penalty box. BC had 34 minutes in penalties, giving BU 15 power plays, seven in the third period.

“I was flabbergasted at how inept we were in many areas of the game, not for effort but we just didn’t execute and we lost every battle for loose pucks,’’ said Parker, whose team last gave up nine goals March 1, 2002, in a loss to Maine at Walter Brown Arena.