THIS STORY HAS BEEN FORMATTED FOR EASY PRINTING
58th Beanpot 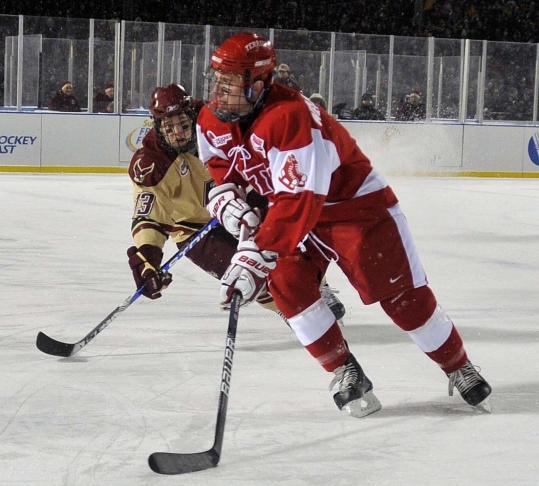 If there is a cooler guy at Boston University right now than David Warsofsky, then he must be spending the weekend skiing in Aspen or hanging out with Tom and Gisele.

Warsofsky plays defense for the Terriers’ hockey team, which will meet Boston College tomorrow night at TD Garden in the Beanpot championship. BU is looking for its 30th title and the 19-year-old sophomore from Marshfield wants his second. But he’s got a lot more in his pocket.

Warsofsky won an NCAA championship in his freshman year. The smallest guy on the ice for BU - he says he’s 5 feet 9 inches “on a good day,’’ and about 170 pounds - he was selected in the fourth round of the 2008 NHL draft by the St Louis Blues.

Friday night the Terriers beat Hockey East rival UMass-Lowell, 3-2, their third straight win, to reach .500 (11-11-3) for the first time since October. Warsofsky’s third shorthanded tally of the season proved to be the winner.

Of course it did. He’s on a roll so powerful he’s bound to leave footprints in the Agganis ice.

In his freshman year, Warsofsky played in every one of BU’s 45 games. The Terriers were responsible for one of the most dramatic victories in recent memory in any sport, coming back from a 3-1 deficit in the final minute of regulation for a 4-3 overtime victory against Miami in the NCAA title game.

Back on campus for his sophomore year, he got the call to join the US national team for the World Junior Championships in Saskatchewan during the holiday break.

Guess who won the gold? Not host Canada, the inventors of the game, and not the slick Swedes, and not the formidable Russians. It was the US that broke a five-year Canadian stranglehold on the gold medal. Warsofsky and his teammates, including fellow Massachusetts natives Chris Kreider and Ryan Bourque, got to prance around the ice with the big trophy and their big grins. Warsofsky, an assistant captain on the US team, is the only player in BU’s storied history to win gold at the World Juniors.

“That was an unbelievable experience for me,’’ Warsofsky said.

He arrived home just in time to suit up for the first men’s college hockey game at Fenway Park, between BU and BC Jan. 8.

And that’s where Warsofsky scored BU’s first goal, a snap shot from the left point that hit the post and caromed into the net. Warsofsky got to show off a new celebration, pretending to throw a ball into the air and swatting it out of the park with his hockey stick.

That’s pretty cool. People should start asking him for his lottery picks.

Except it’s not really a story of luck. Warsofsky’s a smart player, a puck-moving defenseman with great vision and uncanny composure. He’s the one who set up BU’s 2-1 victory over Northeastern in last week’s Beanpot semifinal, stealing the puck off a Huskie stick in the BU defensive zone and feeding it to Alex Chiasson for the winning score.

“It’s been a whirlwind of a year, going back to the national championship and the way that finished,’’ Warsofsky said.

Warsofsky had wanted to become a Terrier since he was a little kid, when his parents invested in BU season tickets to watch their good friend and neighbor Mike Sullivan play.

“I have three older brothers,’’ Warsofsky said. “Growing up it was all hockey in the family. I was always going to their games or playing street hockey in the yard or playing on the pond down the street.’’

Warsofsky’s high school career was typical of the hopscotching some elite hockey players experience. He spent one year at Marshfield High, in his hometown.

“Marshfield was a good spot for me for a year and then, you know when it’s your time to move on,’’ he said. “That’s what I had to do.’’

Meanwhile, Warsofsky was growing “a little bit slower than everyone else.’’

Warsofsky went on to Cushing Academy, a private school in Ashburnham, where he chose to repeat his freshman year. After his sophomore season, the National Team Development Program came calling, and he skipped his junior year and finished high school in Ann Arbor, Mich., while playing with the US National Under-18 team.

He called his time at Cushing the best years of his life. The hockey was good, sure, but it was the broader experience of a diverse boarding school that he treasured.

“It was a lot of fun. I made my best friends that I’ll have for life there,’’ he said. “You learn a lot at boarding school. Not just hockey but how to live on your own, how to be a teenager on your own.

“When you’re in the dorm rooms, you’ve got to learn to get along with the people living next to you, whether you like them or not. Cushing has a lot of different personalities, a lot of different types of people from all over the world . . . I think just as a person, it opens up the world to you and shows you what else is out there, not just the little town that you live in.’’

When Warsofsky moved on to the national team program, he was truly on his own. “I only saw my parents a couple of times a year,’’ he said.

And in the NTDP, hockey was the center of everything.

“Cushing taught you more about just life in general, academic-wise,’’ Warsofsky said. “Hockey came second to all that. Then when I moved up to Michigan it was kind of hockey, then school and social life. When I was out in Michigan, you weren’t worried about what you were doing on Friday night because you had a game Saturday.’’

Warsofsky can’t remember how old he was when he went to his first Beanpot game, but he’s sure it was to watch Sullivan. “I have pictures of when he won the Beanpot, him skating around and all of us out there enjoying it on the ice,’’ Warsofsky said.

“I remember I always had CCD on Mondays, so I always used to get that off when the Beanpot was coming up. You always remember the first Monday in February is the Beanpot - it’s one of those things that you look forward to every year. No matter who’s doing good that season or who’s doing bad, it seems everyone comes to play in the Beanpot.’’