THIS STORY HAS BEEN FORMATTED FOR EASY PRINTING
BU 3, BC 2

BU puts the freeze on BC in a snowy Fenway thriller

When the Boston University men’s hockey team returned from the holiday break, coach Jack Parker and the players promised a much different squad than in the first half, when the Terriers finished a lackluster 4-9-3.

So far, they have made good on the vow.

After beating UMass decisively Jan. 2, the Terriers followed with a strong performance against archrival Boston College at Fenway Park last night, earning a 3-2 victory in front of 38,472, the largest crowd to witness a college hockey game in the eastern United States.

It has been a heady 10 months for BU defenseman David Warsofsky of Marshfield, who scored the first goal of the game during a power play at 6:58 of the first period.

Warsofsky, fresh off a gold medal victory Tuesday in the World Junior Championships in Saskatchewan said it’s been a year of special memories, winning the NCAA title as a freshman last April and the latest being an opportunity to win a hockey game at Fenway Park.

“It was definitely a whirlwind couple of weeks,’’ said Warsofsky, who has yet to celebrate Christmas with his family because of the hectic schedule.

“Starting back all the way to April when we won the national championship, then going to Saskatoon to play for Team USA was definitely a special opportunity for me again and it was definitely an unbelievable feeling raising that gold [medal], and then to come back here and do what we did tonight, hopefully I’ll take a couple of days off if coach lets me and just kind of soak everything in.’’

Warsofsky celebrated his goal in a unique way, too. He used his hockey stick to pay homage to the ballpark, taking a baseball-style swing. He said it was backup goalie Adam Kraus’s idea.

“He kind of came up with it before the game,’’ said Warsofsky. “I don’t know if the coaches were too happy about it, but hopefully he doesn’t see that on film either. It’s a baseball venue but we’re playing hockey out there so I decided to bring something back to it.’’

With 11:01 remaining in the second period, the temperature had dropped to 19 degrees (7 degrees with the wind chill). But the conditions didn’t cool off the Terriers, who increased the lead at 10:50 when freshman center Wade Megan potted a rebound, bunting in a shot from outside the right post.

BC (1 for 8 on the power play) rallied to within a pair during the man advantage at 18:19. Sophomore left wing Paul Carey took the initial shot from the right side and junior center Brian Gibbons buried the rebound past sophomore goaltender Kieran Millan (27 saves).

The Eagles (10-6-2, 7-4-2) pulled to within one at 7:43 of the third period on a shorthanded goal by sophomore right wing Cam Atkinson, who took a pass from Gibbons and beat Millan on the first shorthanded goal against BU this season.

BC continued to pressure in the third period but couldn’t draw closer.

Eagles coach Jerry York said he felt like Flyers coach Peter Laviolette, who said his outdoor experience against the Bruins, although special, lacked something because of the loss.

“Clearly we were two different [BC] teams,’’ said York, whose team couldn’t get a sniff during an extended five-on-three chance in the second. “I thought the first half of the game we were back on our heels and we were playing like we were scared to death to lose the game. We were just letting BU dictate the game.

Parker said it’s something everyone involved will always remember.

“Everybody in the stands, everybody on the ice, coaches, referees, it’s something we’ll all remember as long as we live, it was quite a show,’’ said Parker. “I thought we were kind of quiet in the dressing room between periods the whole game. I don’t know what that was all about.

“But once we got out there, we played pretty thorough. It was one of our better games as far as being smart with the puck, not too many turnovers. We could’ve been better with our decisions as far as penalties that we took, but I thought we played a very, very solid game from start to finish.’’ 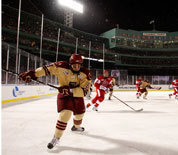 College hockey at Fenway
Your comment is subject to the rules of our Posting Policy
This comment may appear on your public profile. Public Profile FAQ