THIS STORY HAS BEEN FORMATTED FOR EASY PRINTING
BU 5, BC 2

Show of strength by BU

BC is lit up for four power-play goals 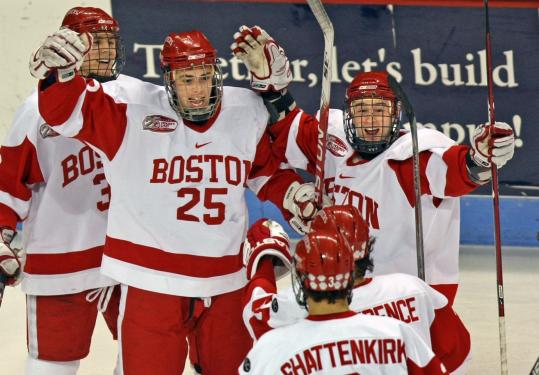 Last season, Boston University got only 1 point out of three regular-season meetings against Hockey East rival Boston College (not including its Beanpot loss, which isn't factored into the conference standings). Last night, the second-ranked Terriers finished their season series against the No. 12 Eagles at 2-0-1 with a convincing 5-2 victory in front of 6,221 at Agganis Arena.

"I thought it was our best game of the year, the way we moved the puck through center ice," said BU coach Jack Parker, whose team went 4 for 10 on the power play. "We kept the pressure on them with team speed because we were moving the puck so well. The speed of the game was pretty nice for us tonight."

BU was without senior forward Chris Higgins, who suffered a concussion and a six-stitch gash in Friday's game against Merrimack. Senior defenseman Matt Gilroy hurt his right shoulder Friday but was in the lineup against BC.

Despite being outshot, 18-6, in the opening period, the Eagles took a 1-0 lead into the first intermission on a power-play goal 40 seconds into the game.

Sophomore center Brian Gibbons started the play when he passed the puck up to senior right wing Brock Bradford. Bradford fired the puck at the net and it pinballed through traffic, bouncing over to senior center Benn Ferriero outside the left post. Ferriero swept it past freshman Kieran Millan (19 saves) for his third goal of the year. But it was all downhill for BC after that.

BU pulled even early in the middle period, scoring on the man advantage. Freshman defenseman David Warsofsky, positioned at the left point, threw the puck over to sophomore center Nick Bonino in the right circle and Bonino one-timed it past goalie John Muse (41 saves) at the 34-second mark.

At 8:04, the Terriers went ahead on the man advantage. Senior Jason Lawrence, in the left corner, threw the puck out to sophomore defenseman Colby Cohen, who was high above the circles. Cohen's slap shot beat Muse for his second goal of the year. It was a boost for Cohen, who was a healthy scratch Friday after having a subpar outing in BU's loss to Providence Tuesday.

"I had taken Cohen out of the lineup because I didn't think he was focused enough defensively," said Parker. "He played great defensively and great offensively. He had a terrific night."

BU added a third goal - its only one at even strength - at 18:16. Freshman right wing Vinny Saponari got the puck behind the net and, skating right to left, tried a wraparound at the post. Muse blocked it with his right skate but Saponari jammed in the rebound for a 3-1 lead.

The Terriers scored their third power-play goal at 2:18 of the third. Sophomore center Colin Wilson set up Cohen for a shot, which Muse stopped. But sophomore defenseman Kevin Shattenkirk was there for the rebound outside the left post and backhanded it into the net for a three-goal lead.

Gilroy scored from the left circle during a two-man advantage with 1:38 left to make it 5-1 and BC's Cam Atkinson scored shorthanded with 1:08 remaining to account for the final score.

"I don't think we've played our best hockey in at least this stretch we've been on," said York, whose team is 1-5-2 in its last eight games.

"We've got to get back Monday morning and start gearing up for Maine next week. We're in a funk, there's no question these last three or four weeks. We're just a step behind the play. We have to play at a higher tempo. We're not quick and that's our trademark, quick and fast. BU was just better tonight."