THIS STORY HAS BEEN FORMATTED FOR EASY PRINTING
BU 3, BC 1 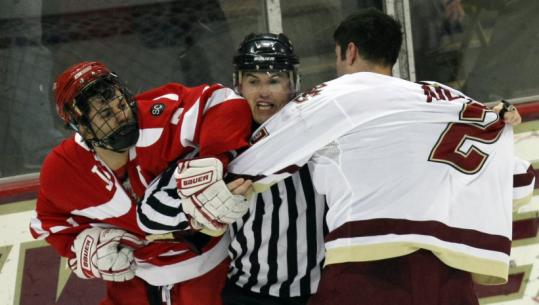 There's not much separating Boston University's and Boston College's men's hockey teams at this point in the season: About 5 miles of Commonwealth Avenue and a couple of notches in the national rankings. But in 60 minutes of hockey this weekend, second-ranked BU took 3 points from its Hockey East rival, adding a 3-1 victory last night before a sellout crowd of 7,884 at Conte Forum to the teams' 1-1 tie Friday at Agganis Arena.

A successful penalty shot by freshman Chris Connolly in the middle of the second period proved to be the difference, but BU (10-4-1, 5-4-1) didn't nail down the win until Nick Bonino's empty-net goal at 19:59 of the third. With goalie John Muse pulled for an extra skater in the final minute, seventh-ranked BC (9-5-2, 5-4-2) mounted a final flurry against BU goalie Kieran Millan, with Jimmy Hayes and Benn Ferriero both coming within a blade-width of tying the game.

"That was a really difficult game for us to lose," said BC coach Jerry York. "I think we had some terrific opportunities right at the end with the goalie pulled that looked like surefire goals."

BU held a 2-0 lead after two periods, but Matt Price brought BC within one at 6:01 of the third, picking a rebound off Millan's pads and flipping it into the net amidst a tangle of sticks and skates. But the Eagles, 0 for 6 on the power play, couldn't get anything else past Millan.

"That's two excellent college hockey games, back to back," said York. "That's pretty good for college hockey. But they took 3 points. Our inability on the power play both nights hurt us."

Parker was also pleased with his defense, which held BC to 19 shots while the Terriers put 26 on Muse. "I don't think they've gotten outshot all year," Parker said.

"We gave up the blue line a little too much, but we got great back pressure on the puck and that really helped us out."

Freshman forward Corey Trivino gave the Terriers a 1-0 lead at 1:59 of the first period, pouncing on a loose puck that only he seemed to notice. The play began when Matt Gilroy tested Muse with a slap shot; the puck hit Price's leg and fell to the ice. The action appeared suspended as the players looked for the puck but Trivino, who had a bead on it the whole time, swooped in to stuff in his first goal of the season.

Both squads broke off for a bit of belligerence in the second period, Nick Petrecki's collision with BU forward Jason Lawrence setting off some roughhousing. Just after the teams settled down, Connolly took a lead pass from Colby Cohen at the BC blue line, rushed the net to shoot, and was dragged down from behind by defenseman Tommy Cross.

BU had not converted a penalty shot since Oct. 25, 2002 (Gregg Johnson against Nebraska-Omaha in a 6-4 win at Walter Brown Arena), but Connolly coolly skated straight in on Muse, sliding a forehand inside the left post.

"He slowed up a little," said Muse, "and just slid it by my pads to the right."

BU got the big reward for the weekend's work, but both teams impressed.

"It's an indication that both teams are going to be very, very good hockey teams," said York. "We both should be vying for championships."