To a certain segment, more than a game 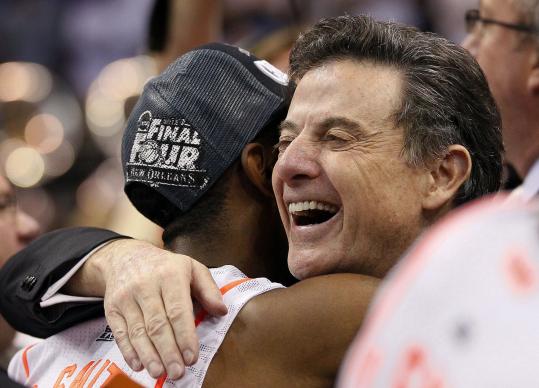 Not that there’s anything funny about kidney disease, but you must admit that the idea that in the municipality of Georgetown, Ky., a Kentucky Wildcats fan already hooked up to a dialysis machine got into a physical altercation with a Louisville Cardinals fan awaiting his turn tells the rest of us pretty much all we need to know about the nature of this particular rivalry.

Rick Pitino, meanwhile, was aware of it, but was a bit sketchy on the details.

In 49 states, plus possessions, Saturday’s NCAA semifinal battle between the University of Kentucky and the University of Louisville is just a basketball game, and it would be nice if it turned out to be a good one. In the Commonwealth of Kentucky, this is the ultimate battle of Good vs. Evil.

Is it possible to have a TV share in excess of 100?

The people in Kentucky don’t expect the rest of us to understand. The way they see it, this is their world, their issue, and, frankly, their sport. When the game is over, someone will have to live with a painful loss, and if it turns out to be Kentucky, only more so.

“I think there is more pressure on them,’’ suggests Louisville senior Kyle Kuric. “That’s just how it is.’’

It’s really a very simple basketball proposition. Kentucky (36-2) is the top-ranked team in the land. Calipari’s first seven players may all wind up in the NBA. Anthony Davis, Michael Kidd-Gilchrist, and Terrence Jones are all high lottery picks. Davis and Kidd-Gilchrist may be 1-2.

Louisville (30-9) is a nice college team. But Pitino may not have more than two legit NBA prospects in his rotation, and even those two - guard Peyton Siva and center Gorgui Dieng - are far from mortal NBA locks. It would hardly be shocking if Kentucky cruised to a double-digit victory.

So the fan interest in this game is not really a byproduct of the actual circumstances. Kentucky ought to win this game, which is why a Pitino-coached team is so dangerous. He’s Rick Pitino, after all, and no college mentor coaches ’em up any better. In one 40-minute game, you can never say that a Pitino team has zero chance.

No, this is all about a history that long precedes either Calipari or Pitino, whose own relationship could be the theme of a doctoral thesis. And it would be a heated rivalry even if Pitino had not formerly coached - and coached very successfully - at Kentucky before departing for the NBA and then returning as coach of Louisville, an act, some say, that is analogous to breaking up with someone and then marrying, not her best friend, but rather her worst enemy.

Kentucky’s basketball tradition goes back to the early ’30s, when a Kansan named Adolph Rupp came to Lexington to impose a four-decade basketball dominance on the Southeastern Conference. Eighty-two years later, the so-called Big Blue Nation is America’s most formidable college basketball fan base.

But Louisville began flexing its own basketball biceps in the ’50s, making its first Final Four appearance in 1959. Louisville became an annoying little brother, if you will, and Kentucky didn’t like it. Louisville even had the audacity to win two NCAA championships (1980, 1986) while the Wildcats were suffering through an 18-year title drought (1978-96). Oh, the indignity.

The haughty Wildcats would not deign to play them, either. It took a push from then Governor John Y. Brown, and a subsequent act of the Kentucky state legislature, to drag the Wildcats into playing the Cardinals, which they now do every year.

Pitino frames the rivalry in an interesting manner. “It all started with the racial lines in Louisville, Ky.,’’ he explains. “We are the minority university. They are the university of the privileged. That’s where the rivalry started. It was thrown out the window when Tubby Smith became the first African-American coach [at Kentucky]. The hatred wasn’t based on race any longer. I did everything humanly possibly to recruit Louisville to end those lines because I didn’t like it. The lines are no longer racially motivated. It’s just pure hatred.’’

Coach Cal has an equally intriguing take on the rivalry. “It’s not a matter of saying, ‘Let’s kill those guys,’ ’’ he says. “It’s a matter of physiology. Hatred and fear are very closely related. And they’re playing as well as any team in the country.’’

This is, of course, the same Coach Cal who inflamed the situation last summer by declaring that, unlike, say, the state of North Carolina, which has both Duke and the State U to attract fans, or Michigan, which has Michigan and Michigan State, Kentucky is “the Commonwealth’s team.’’

But it was Pitino who set the table nicely for this game by saying, “There will be people at Kentucky who will have a nervous breakdown if they lose to us.’’

The rivalry extends to facilities. Kentucky moved into an enormous (23,000 capacity) downtown Lexington arena named after Rupp in 1976. Louisville played for decades in historic Freedom Hall, which seated 18,000. But that wasn’t good enough. Louisville now plays in the downtown, 22,000-seat KFC Yum! Center. It is far more modern and far more glamorous than charmless Rupp Arena. Take that, Wildcats!

The players have managed to insulate themselves from the din. Very few of them are from Kentucky, anyway. “It’s huge for the fans, but we aren’t looking at it like that,’’ claims Kentucky senior Darius Miller, a native of Maysville, Ky. “This is just our next game, and we are going to continue to prepare just like we have all year.’’

Son, let me tell you something: If you want to enjoy the rest of your life in your native state, tell your buddies to prepare better than they have all year. The consequences of defeat are just too dire.