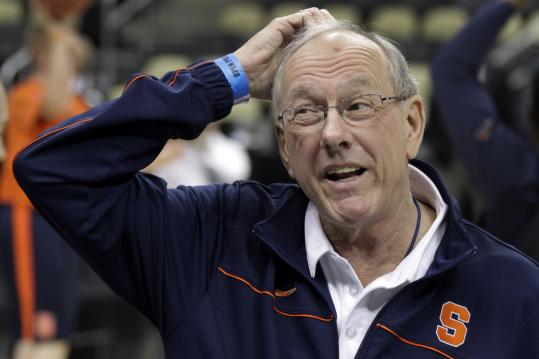 PITTSBURGH - In late January, when academic issues forced Fab Melo to sit out three games, the thought lingered in Syracuse’s locker room that it would be more than just a hiccup, that the issue could creep up again.

With Melo and his three blocks per game, the Orange won 20 straight games to start the season, the most in school history.

Without him, and anything close to a 7-foot human flyswatter standing in the paint, they lost the first game they played, to Notre Dame on the road, then bounced back to win two straight.

When he returned, they ran off eight more wins to end the season, before falling to Cincinnati in the Big East tournament semifinals.

Melo’s value was never a question. The small, but real, concern was whether his issues would bite him.

Then Tuesday, as the Orange prepared to make an NCAA Tournament run, it did.

Melo, the Big East defensive player of the year, was ruled ineligible, and the Orange will be without him for the tournament.

It was the kind of news that busts brackets.

But as they prepared to face UNC-Asheville on Thursday, the Orange decided to face the latest issue but not dwell on it.

“We played without him before,’’ said forward Kris Joseph. “I don’t think we’re ill-prepared. It’s not something that just hit us. We were informed, and we’ve done it before. So we’ll be ready.’’

Initially, coach Jim Boeheim did his best to say as little about Melo’s situation as possible. But what he emphasized was that there was no disappointment in the Brazilian-born sophomore.

“I will say this, he didn’t let anybody down in my opinion, all right?’’ Boeheim said. “I know that’s out there. I don’t believe that to be true.’’

Melo practiced with the team until Tuesday, and guard Dion Waiters said Melo addressed his teammates after the news came down.

“He spoke, he said he was sorry for what was going on,’’ Waiters said. “He said he loves us and he’s got our back no matter what. That’s the biggest thing, he’s going to be there in spirit.’’

Still, Waiters said the timing of the news and the impact of Melo’s absence weren’t easy to accept for a team that has had to put blinders on during a season filled with distractions. Accusations at the start of the season by former ball boys led to the dismissal of associate head coach Bernie Fine. Then just last week, a Yahoo! Sports reported that 10 Syracuse players since 2001 had violated the NCAA drug policy, and yet been allowed to play. Despite it, the Orange, the top seeds in the East Regional, are 31-2 going into the tournament.

“I was a little upset,’’ Waiters said. “Everything we’ve been going through this season, we’ve been able to overcome it. You can’t overcome this. It’s the end. It’s the last ride. I would like for everybody to be here as a team, but things happen for a reason, whatever they may be. We just have to be ready to play.’’

As they did during the regular season, the Orange will turn to Baye Moussa Keita and Rakeem Christmas to fill the hole left by Melo. But the jump from understudies to leads roles came as a shock.

“We’re working through it,’’ Keita said. “We still have one goal. Obviously, he’s a big piece of our team. We have other players that can step up and fill the roles. We just have to step up and play our game.’’

The decision obviously sent tremors throughout the regional, although the reactions from the other teams in Pittsburgh varied.

West Virginia was one of the three teams that faced Syracuse without Melo, absorbing a 63-61 loss, and Mountaineers star forward Kevin Jones said, “He definitely is a difference-maker. You can see it on their team. They definitely play better with him. I think it is a crushing blow for them. We’ll see what happens. I think it might make them better. They might band together.’’

Loyola coach Jimmy Patsos said, “Boeheim is a great coach. He’s setting everybody up because he [only] has nine players. He still has eight good ones. That’s a tough one to lose because he’s a 7-footer, great player. It’s none of my concern, [but] it’s an odd time for that to happen. I think it’s not good for a team . . . Fab Melo is a big loss. Can Boeheim still win? Absolutely.’’

Then there’s Southern Mississippi coach Larry Eustachy, who said, “As idiotic as this may sound, I don’t know who he is. I don’t watch college basketball, I watch ‘Law and Order.’ ’’

For UNC Asheville, the task is still to become the first No. 16 seed to upend a No. 1. Bulldogs forward Chris Stevenson was sympathetic, but only to an extent.

“I really feel bad for Fab Melo because this is like the best proving point for any college basketball player in the world, to get to the NCAA Tournament and prove your ranking, prove who you are as a player,’’ he said. “I feel bad for him. I believe Syracuse will miss him very much. But I mean, I think it’s Keita who is coming in. He’s still 6-9. They’ll be OK.’’

However, considering the work Melo put in, including shedding 30 pounds, and the other issues he had to overcome leading into the season (he was charged with criminal mischief in the offseason), Boeheim empathized.

“I feel bad for him,’’ Boeheim said. “I feel bad for the rest of the players on the team because you don’t want to lose a teammate in this situation at this time. It’s a very difficult thing to go through. He’s a kid that’s come, in my opinion, just an unbelievable way in a relatively short period of time.