Long, strange trip it's been

Fired in disgrace, Eustachy is back 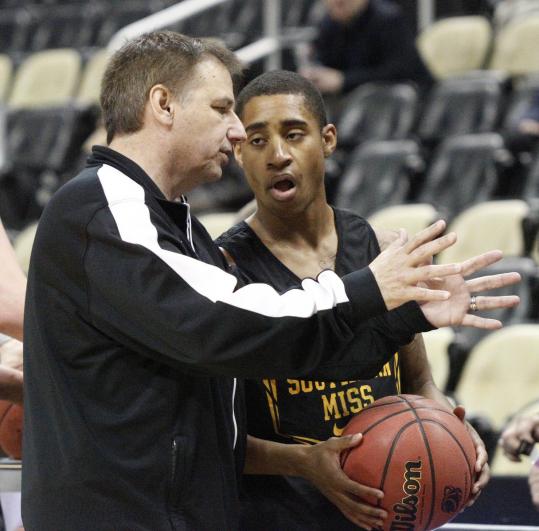 PITTSBURGH - The last time Larry Eustachy was seen on the national stage, one arm was slung around a coed and the other hand held a can of Natural Light beer. His alcoholism and eventually his downfall were on display, a cautionary tale about behaving badly in the age of social media and the Internet.

He grasped another cup Wednesday, this one marked with the NCAA and Powerade logos, as the cameras rolled and the lights shone on a man still remembered primarily for drinking and frat parties, for being the butt of a million jokes. Less so, for the road he has taken back.

As Eustachy began his press conference, his Southern Mississippi team having bought him a return ticket to the NCAA Tournament, he said, “It’s great to be here. I hope the story is about our team and not me.’’

But how could it be?

Eustachy has been mostly a faint memory for the last decade, a whiff of scandal and old beer and the ruin of a coach. He had his high moment back in 2000, when his Iowa State team lost to Michigan State in the Elite Eight, when he was national coach of the year. Iowa State slipped after that, getting upset as a No. 2 seed the next year by No. 15 Hampton, a moment that until now was his last taste of March Madness.

And then came 2003, when Eustachy was fired after pictures surfaced of him partying with college students after road games.

He’s now at the helm of the No. 9-seeded Golden Eagles, who are set to play No. 8 Kansas State to kick off Thursday’s games at Consol Energy Center. And as much as Eustachy tried to get the focus on his team, it remained on him, on his return, on his message.

“I welcome the chance to talk about it any moment, any chance I get. I think it’s helped a lot of people. I think it’s brought attention to a real problem.’’

Eustachy says he’s sober now, having left the alcohol behind with his days at Iowa State. He was hired by Southern Mississippi in 2004, after a year out of coaching, and has gradually built the Golden Eagles to this point - 25 wins and a trip to the tournament.

“After I was fired at Iowa State, I took a hard look at myself and realized I had to make some changes,’’ Eustachy said. “I’ve become better at everything I do - a dad, a son, a coach.

“Ten years is a long time. But I’ve settled into a new way of life that is much more enjoyable than the old way. It’s been a long haul here at Southern Miss, which I knew it would be. But I knew we could do this one day.’’

He has a new team, a new wife, a new life. He hasn’t made the mistakes he once did.

That makes this experience different from when he came to the tournament with Utah State in 1998 or Iowa State in 2000 and 2001. He is not the same coach, not the same man.

“They say when you start drinking you stop maturing,’’ he said. “I had my first drink at 17. So basically at the old tournament I was a 17-year-old coming to tournaments. It’s been quite a long time since I’ve had a drink. So I’m far more mature. I’d like to think I’m more humbled.

“I’m much more appreciative, if that makes sense. Very grateful. Don’t take it for granted. Look at it completely differently. To walk in there and see West Virginia sharing the same locker room, the one next to us - Bob Huggins is a great friend of mine. I used to take that for granted. I don’t anymore.’’

His team has gone through its struggles. Angelo Johnson lost his 4-year-old daughter last summer. LaShay Page’s mother died last month at age 38. Darnell Dodson was dismissed from the team a year ago after facing larceny charges, which came as a result of issues with alcohol.

And Eustachy has made himself a better person.

“I couldn’t be happier,’’ said Kansas State coach Frank Martin of Eustachy’s return. “I’ve always been a big fan of his. He’s one of those guys, he was sitting on top of the mountain and some unfortunate things took place. He was kind of left in the corner somewhere.

“He’s never quit pursuing what he loves, which is competing, getting kids to learn how to compete, winning games.’’

Eustachy did that at Idaho and Utah State and Iowa State, reaching heights that none of those programs had seen regularly.

It has been long years since then, years of examining who he was, his decisions, how far he’d fallen. It has taken him long years to get back here, to return to a place that once held his greatest basketball moments.

Eustachy doesn’t regret those long years. Not at all.