THIS STORY HAS BEEN FORMATTED FOR EASY PRINTING
Men's notebook 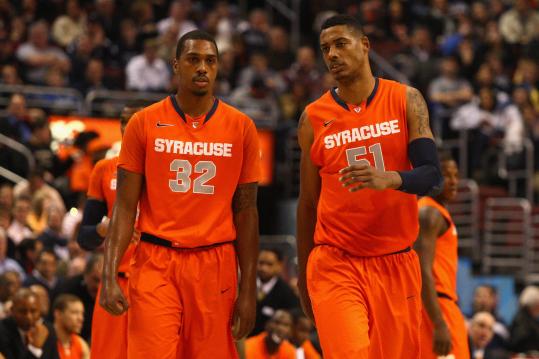 Syracuse will have to chase a national championship without starting center Fab Melo, who has been declared ineligible for the NCAA Tournament.

The university announced Tuesday that the 7-foot Brazilian, who did not travel with the team to Pittsburgh for the second- and third-round games, won’t take part in the tournament due to an eligibility issue. The school did not elaborate.

Melo missed three games earlier this season - including one of the top-seeded Orange’s two losses - because of an academic issue.

Coach Jim Boeheim has not decided who will start in place of Melo, the Big East defensive player of the year, Thursday when Syracuse (31-2) opens the tournament against No. 16 seed North Carolina-Asheville.

Melo averaged 7.8 points and 5.8 rebounds and had 88 blocks this season for Syracuse, which was ranked No. 1 for six weeks. The Orange opened with 20 straight wins before losing at Notre Dame, 67-58, without Melo. Syracuse then won 11 in a row before losing, 71-68, to Cincinnati last Friday with Melo in the Big East semifinals.

Bobby Davis and Michael Lang claim Boeheim defamed them by saying they were liars out for money after their allegations of abuse by former assistant coach Bernie Fine surfaced in November. The pair, who claim Boeheim knew or should have known about the abuse, are suing the school and Boeheim.

In papers filed Tuesday asking a judge to dismiss the lawsuit, lawyers for the defendants argued that Boeheim’s statements fall within his constitutional right to express opinions.

Obama filled out an NCAA Tournament bracket for ESPN for the fourth straight year. On the women’s side, he selected Baylor, St. John’s, Connecticut, and Notre Dame to advance.

Kentucky and North Carolina are No. 1 seeds, while Missouri and Ohio State are seeded second in their regions. Baylor, UConn and Notre Dame are top seeds, with St. John’s a No. 3 seed.

North Carolina coach Roy Williams said he probably won’t know until Thursday whether forward John Henson will be ready for the Tar Heels’ tournament opener the next day against the Lamar-Vermont winner.

Henson hurt his left wrist on a fall during the Atlantic Coast Conference tournament. He didn’t play the final two games of the tournament, though he dressed for the championship.

“If I had to guess - and this is merely a guess - if the game were today he probably still would not play today,’’ Williams said Tuesday. “But we’re being hopeful that he will be Friday.’’

UCLA athletic director Dan Guerrero said coach Ben Howland will remain in charge of the troubled program. The Bruins (19-14) finished fifth in the Pac-12 for the second straight year, the third consecutive season in which the Bruins recorded double-digit losses following three consecutive trips to the Final Four . . . Darrin Horn was fired by South Carolina after four sliding seasons of Gamecock basketball. The team posted fewer victories in each year, bottoming out in the Southeastern Conference this season at 10-21 and 2-14 in the league - its worst record in 20 years in the SEC . . . SMU fired Matt Doherty after six seasons in which the high-profile former North Carolina coach went 80-109 and failed to take the Mustangs to the NCAA Tournament.

Kentucky forward Anthony Davis is the winner of the Wayman Tisdale Award, presented by the US Basketball Writers Association to the national freshman of the year. Davis led the Wildcats to a 32-2 record and No. 1 ranking, averaging 14.3 points and 10.0 rebounds, while leading the country with 157 blocked shots . . . Glen Rice Jr., was kicked off the Georgia Tech team, less than a week after a shooting incident outside an Atlanta nightclub led to criminal charges. Rice, son of the former NBA star, led Georgia Tech in scoring and rebounding this season but had numerous disciplinary issues. He didn’t play again for the Yellow Jackets after being suspended Feb. 17 . . . The Pac-12 tournament is moving to Las Vegas for the next three years. The Pac-12 tournament, running March 13-16, 2013, will be the fourth conference tournament in Las Vegas, along with the Mountain West, Western Athletic, and West Coast.