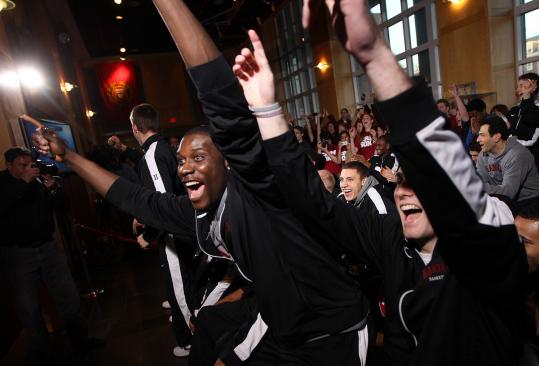 Forward Kyle Casey (center) leaps from his seat after Harvard’s name was called as the No. 12 seed in the East Regional. (Bill Greene/Globe Staff)
By Michael Vega Globe Staff / March 12, 2012
Text size – +

The mere fact Harvard held an NCAA Tournament selection gathering Sunday evening - staged appropriately in the Hall of History at the Murr Center - was historic.

It was in keeping with the other first-time achievements this season for the Crimson, who cracked the Associated Press Top 25 for the first time, and clinched their first outright Ivy League title since 1946 last Tuesday night to cement their first NCAA Tournament appearance in 66 years.

The only suspense Selection Sunday held for the Crimson was their seeding, opponent, and destination.

And so, when Harvard learned it had been installed as the No. 12 seed in the East Regional and dispatched to Albuquerque for a first-round matchup Thursday against No. 5 seed Vanderbilt of the Southeastern Conference, the team’s spontaneous reaction reflected the historical significance of the moment: a long-awaited leap of joy.

Surrounded by media, students, friends, and family, the Crimson (26-4) sprang from their folding chairs in front of a pair of flat-screen TVs and broke into a roar when Harvard’s name came up.

For Kyle Casey, a junior forward from Medway who earned All-Ivy first-team honors this season, Harvard’s NCAA Tournament appearance will come against a school that heavily recruited him.

“I was happy that our team’s name was called and that it was Vandy,’’ Casey said. “I knew there’d be a little story behind that, but there’s been a lot of Harvard [players] and Vanderbilt [players] who have been recruited by both schools. They’re both good universities and I’m just looking forward to the matchup.’’

As will President Obama, who no doubt is expected to predict his alma mater to advance past the first round when he fills out his brackets.

“We’re waiting to see,’’ said Harvard coach Tommy Amaker. “That is one thing I’ve been waiting on, it’s the brackets, I’ll admit that. We’ll be waiting to see. No messages. We recognize he has his hands full with a lot of different things, so we’ll just sit back and wait and see.’’

The winner between Harvard and Vanderbilt will advance to face No. 4 Wisconsin or No. 13 Montana on Saturday for the right to move on to the East Regional at TD Garden.

The Commodores (24-10) won the Southeastern Conference tournament Sunday with a 71-64 victory over Kentucky, the NCAA Tournament’s No. 1 overall seed.

“It was so neat to see these guys jump for joy when our name was brought up in the broadcast in one of the brackets, and obviously with the matchup,’’ Amaker said. “We’re thrilled to represent our conference, our university, and certainly our program, and we’ll do the best we can.’’

Tension began to fill the room when CBS began its selection show by revealing the No. 1 seeds: Kentucky in the South, Michigan State in the West, Syracuse in the East, and North Carolina in the Midwest. When the South Regional was revealed, the room filled with gasps when Connecticut, one of three New England teams to make the field of 68 along with Harvard and America East champion Vermont, was installed as a No. 9 seed.

As for Harvard’s seeding? “I had no thoughts in terms of seeding,’’ Amaker said. “I don’t get wrapped up in that and try to figure that out . . . we were just excited to have our name called.’’

When Duke was revealed as the No. 2 seed in the South, there was palpable excitement over a potential matchup with Amaker’s alma mater. But those thoughts were dashed when Lehigh was paired against the Blue Devils. Amaker, who watched from the back of the room, did not even flinch.

“Nothing would have surprised me,’’ he said. “As we’ve seen in the past with the brackets and the matchups - for a variety of different reasons with history or relationships - all those things are sometimes thrown into these decisions. But I wouldn’t have been surprised in the least bit. We have our hands full with Vandy, but certainly that would have been a tough matchup, as well.’’

But the Crimson, who had waited 66 years to have their ticket punched to the Big Dance, had to wait until the East Regional bracket was filled to learn their fate at 6:32 p.m.

“I was thrilled that we were able to have this here today, with the great setup in the Hall of History,’’ Amaker said. “It was a very appropriate environment for us to host the show and for us to watch it and to have our kids there, and then their reaction was priceless.

“You go through a couple of regions and our name isn’t there. And they’re slouching and slumping down into chairs, then they have to go to commercial break, but certainly seeing their reaction was all worth it to me.’’