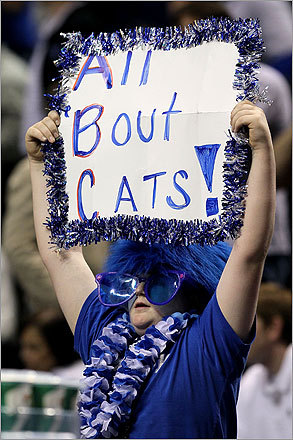 Every now and then, we get a glimpse into a world we can’t possibly fathom. We experience a slice of sports life that is impossible to comprehend for those of us living in a traditional professional sports town here in the stodgy Northeast.

Yesterday was one of those days.

I wrote what I thought was a harmless column in support of the Cornell basketball team. The Big Red are a No. 12 seed from the Ivy League, and tonight they play Kentucky in a Sweet 16 game at Syracuse. An Ivy League team gets this far about as often as Larry Bird picks up a check, so it seemed like interesting fodder in an otherwise slow sports week.

It was, of course, impossible to make the point without a couple of perfunctory jabs at coach John Calipari (two Final Four appearances, two vacancies) and the bags of cash involved in the UK program. There were a couple of references to the academic strengths of some of the Cornell players.

The folks in Kentucky took offense with a vengeance. A local radio guy named Matt Jones, writing on a website, charged me with racism and elitism, and rallied Lexington.

Wildcat Nation swung into action. E-mails popped onto my BlackBerry just about every minute for a couple of hours. The themes were repetitive and highly unoriginal. Most of them used the words “racist’’ and “elitist’’ — usually framed as “Your a racist’’ or “Your an elitist.’’

Whoops. There I go, being elitist again.

For the record, there are four black players on the Cornell roster. And there are three white players on the Kentucky roster. So can we extract the racism from the argument? I don’t think Cornell guard Louis Dale would appreciate the notion that anyone who roots for Cornell doesn’t like black people.

Jones knows better. He labeled Boston “the most racist major sports town in America.’’ I assume he has data to support this, since he also claims to have gone to Duke Law School (no elitism there).

“The fanaticism that New England shows for the Red Sox is the same fanaticism that is shown from the entire state for the Kentucky basketball team,’’ said DeFilippo. “When I first got there, we went to Freedom Hall for a game against Notre Dame and we had 19,000 show up to watch the shootaround the day before the game.

“On days of Kentucky basketball games, there are fewer operations in the local hospitals because people are afraid they might still be under anesthesia and miss the game.’’

Gene knows. In 2007, he was AD at BC when the football team was ranked second in America for two weeks and nobody even noticed. We were too busy with the Red Sox in the World Series and the 18-0 Patriots. We can’t relate to rampant yahooism for the local college team. Must be elitism. Or racism, maybe.

Coach Cal didn’t get much attention when he took UMass to the Final Four in 1996. Now he’s the god of Kentucky, with more than a million Twitter followers and 138,000 Facebook friends. A fawning piece in the New York Times yesterday lauded Calipari’s social networking while simultaneously acknowledging, “Calipari does not use a computer and struggles to type on his BlackBerry.’’ According to the story, Coach Cal’s networking is facilitated by David Scott, who “often spends 18 hours a day on Calipari’s website and overseeing his Facebook page.’’

Wow. Where can I sign up for that duty?

Here are some of the nuggets Cal’s Army sent my way yesterday:

■“You can have Boston, the Northeast, Ted Kennedy, and the Red Sox.’’

■“I’d be hard-pressed to think of a more inane, pointless profession than a sports writer — Wait, I got it . . . how about signholder — you know the guy who holds a small placard and stands right outside of the business he’s promoting. That guy . . . that’s who you are Dan.’’

■“You and many others, especially the eastern and northeastern press, love to hammer lowly ‘hillbilly’ Kentucky for no reason while lettin the same stuff we are accused of go unreported with northeastern teams.’’

■“You should be ashamed of your elitist self. Tough job market? For the Ivy League Cornell players, that’s laughable. Try the job market for Kentucky seniors. The Cornell players have been handed everything their entire lives.’’

■ “While many people in my state can only laugh at your intolerable lack of sports knowledge and your ‘please pick me’ infatuation with appealing to people’s underdog bones, I actually feel pity for you.’’

■“Your [sic, told you] a disgrace to your paper and your readers. Know your facts a little better before you go and play the ‘world against Cornell’ role up next time. Also, what exactly are you implying by using the words ‘bags of cash’ to run a Kentucky program?

■ “Boston makes Mississippi and Alabama look progressive on race relations — proud of that, are ya?’’

■“I am a graduate of the University of Kentucky from the year of our Lord 2008, and I take superlative umbrage to your comments regarding the Cornell/UK basketball game.’’

The “superlative umbrage’’ is hereby acknowledged.