Improvement? Do the math

After a banner season, MIT gets off to 11-0 start 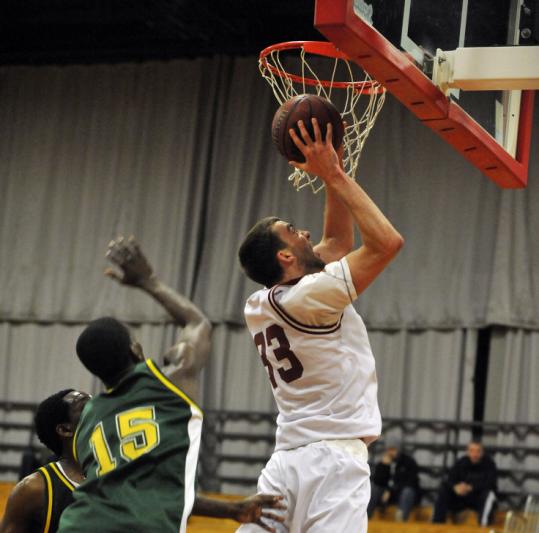 At 6 feet 8 inches, Bill Johnson gives MIT some bang on the boards, and he is looked to by his coach as a team leader. (David Silverman/ DSPics)
By Craig Larson Globe Staff / December 27, 2009

Bill Johnson recalls the scene playing out more than once in pregame warmups last winter, a referee approaching the 6-foot-8-inch forward or a teammate and inquiring, “Where’s the rest of your team?’’

The entire MIT men’s basketball team was on the floor.

The Engineers were short on numbers - both in height and players in uniform - but certainly not in talent, or victories, or achievement.

There was no better Division 3 player in the nation a year ago than the magnificent Jimmy Bartolotta, a 6-4 scoring machine who put the Engineers on his broad shoulders and carried them to new heights. The program’s first New England Women’s and Men’s Athletic Conference title. The first NCAA tournament appearance. The first NCAA tourney win. A season for the ages that went well beyond the 21 victories.

“Jimmy changed the culture here,’’ says Larry Anderson, now in his 15th season as coach of a program on the rise along the Charles River in Cambridge. “You could not quench his thirst. He would not accept being second best, and he turned into a monster.’’

Johnson said simply, “Jimmy put us on the map, the hardest worker I’ve ever seen.’’

Off the court, he was a double major in the classroom at one of the world’s most challenging academic institutions. On the court, he was the Engineers’ first 2,000-point scorer and the consensus Division 3 National Player of the Year.

Bartolotta, who is now suiting up for Air Avellino in Serie A, the top professional league in Italy, gave the MIT program credibility.

“We have [players] looking at us now that would not have taken us seriously six to seven years ago,’’ said Anderson. “We used to call ourselves the best basketball team that no one had heard of.’’

That perception is rapidly changing.

What has emerged, despite Bartolotta’s absence, is a deep, determined, and confident squad that has been unbeatable through its first 11 games and is ranked (No. 22) for the first time. Tomorrow afternoon, the team will head up the river to match wits, brawn, and jumpers with Division 1 Harvard, a squad that has its own backcourt whiz in senior Jeremy Lin and is off to its best start (7-3) in a quarter-century.

The stunning aspect of MIT’s 11-0 run, though, is the makeup of Anderson’s roster, which features seven freshmen, five of whom see significant minutes, and sophomore forward Noel Hollingsworth, a 6-foot-9-inch force who in reality is a first-year player after logging 23 total minutes at Brown as a freshman before finding a new home at MIT.

“These kids are so smart, they should understand that we should not be 11-0 right now, but the [winning] culture has been perpetuating,’’ said Anderson, citing the leadership of Johnson and fellow captains Patrick Sissman and Eric Zuk, a 6-5 junior guard out of Concord-Carlisle.

The transition started in earnest the week after last season’s memorable march ended with a second-round loss to Farmingdale in the NCAA tournament.

“Our No. 1 goal was to have the freshmen up to speed and playing like veterans by the start of the season,’’ said Johnson, who returned for his fifth year (he received a medical redshirt after missing the final 21 games of his freshman season), in part, because of the promise of the newcomers. He also is finishing up his thesis in political science, analyzing the economic exchanges between China and Taiwan. But that’s another story.

“We told [the freshmen], ‘When the summer starts, we need you here in Boston, to start playing together,’ ’’ he said.

Mitch Kates, a point guard from Colts Neck, N.J., via Phillips Exeter Academy, listened. As did Will Tashman, an athletic 6-8 forward from Atherton, Calif. And Ben Montgomery, another 6-8 forward from Annapolis, Md., and Jimmy Burke, a feisty scorer from Scotch Plains, N.J.

And of course, the prize, Hollingsworth, who after committing to Brown discovered that the program was no longer the right fit, as coach Craig Robinson left for Oregon State.

“I asked him, ‘Do you see what we need? We’re a little small,’ ’’ said Anderson, who had recruited Hollingsworth out of Judge Memorial Catholic in Salt Lake City.

“Great character and work ethic, with an appetite to be the best. He’s a tough customer in the low block and he can also hit the three.’’

His daily tutorials in the paint against Engineers third-year assistant Paul Grant, the former Boston College and Wisconsin 7-footer, are paying dividends, too.

MIT foes are feeling the pain now, the last month in particular, starting with Hollingsworth’s 30-point, 11-rebound outburst at Newbury Dec. 3. He followed with 28 points and seven boards in an overtime win over Gordon, a 23-12 double-double vs. UMass-Boston, 30 points in an OT victory over Salem State, and 34 points and 12 rebounds vs. Lesley.

“We have great shooters, so it’s pretty tough to double down on me,’’ said Hollingsworth, who is averaging a team-high 21.1 points and 10.2 rebounds. “I can score down low versus most guys.’’

Kates has stepped right in as the team’s floor leader, averaging 13.8 points and leading the team in assists while playing a team-high 30.7 minutes per game.

“We told Mitch from the start, ‘You have to lead us,’ ’’ said Johnson.

Anderson says the two may be “the most ready players I’ve had at their respective positions in my 15 years here.’’

The presence of the new bigs also has allowed Johnson to move back to his natural position, out on the perimeter. He can also boast about how he walks shoulder-to-shoulder around campus with Hollingsworth, Tashman, and Montgomery.

“Now, we are a physical presence,’’ said Johnson. “We now look like a basketball team.’’

Anderson credits the veterans for their unselfishness, allowing the freshmen to flourish.

“They are playing for something bigger,’’ said the coach.

Johnson, for one, is contributing less, at 9.2 points per game after averaging 17-plus last year.

“We have a legitimate chance to do some really special things here this year,’’ he said.

And that’s why tomorrow’s tilt against the Crimson, the first matchup on the court between the academic powerhouses since 1985, is so intriguing.

“It’s nice playing a Division 1 school, it certainly means a lot - and not just for us, but the alums, too, the MIT community,’’ said Johnson. “The MIT-vs.-Harvard competition traditionally is solely academically based, but it’s our one chance to have the competition be about basketball.’’

Anderson, who considers third-year Harvard coach Tommy Amaker a friend, flashes a smile when he thinks back to how far his program has come the last 15 years.

“At the time, we were going to be the Duke of Division 3 basketball. Now, I don’t want to use another institution as an example. If Duke is recruiting him, I want to recruit him, too.

Craig Larson can be reached at clarson@globe.com