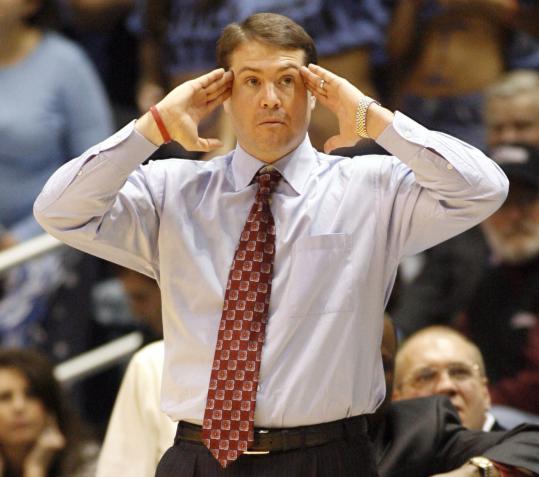 UMass coach Travis Ford is sure to attract other suitors after the Minutemen's run, which put them in the NIT final. (STEW MILNE/Associated Press)
Email|Print|Single Page| Text size – + By Michael Vega Globe Staff / April 3, 2008

Has Ford exceeded expectations? "I don't know if it's exceeding expectations because what we were looking for was to improve the program and to see steady improvement," McCutcheon said of the Minutemen, who have overcome the disappointment of not making the NCAA Tournament.

"I think the rate with which we had done that is kind of eye-opening," McCutcheon said, referring to Ford's 62-34 record at UMass.

Told it had likely opened the eyes of university presidents and ADs where vacancies had popped up, including Louisiana State, Providence, and more recently Oklahoma State and Marquette, McCutcheon smiled then feigned an expression of dread.

McCutcheon knew Ford's name was bound to make the rounds of the coaching rumor mill.

"He's done a great job and that's going to happen," said McCutcheon, who declined to comment on whether he'd been contacted by anyone seeking permission to speak with Ford about a vacancy. "If that were to happen, opportunities would open for him eventually, I'm sure, whether it's this year or in the future. It just puts us in a better position because the [UMass] job becomes that much more attractive.

"Now, having said that, we're going to do everything we can to keep him for as long as we possibly can. I know he's happy here, I know he likes living in Amherst, and I know his family is happy here, but there's a reality out there, too, and we're not naive about that."

If, as has been rumored, LSU, where former UMass chancellor John V. Lombardi is now president, expressed an interest in Ford and his Kentucky pedigree and familiarity with the Southeastern Conference, UMass would likely be hard-pressed to make a competitive counteroffer. Three years ago, UMass signed Ford to a five-year contract that pays him a base salary of $200,000 with incentives and bonuses.

And yet, according to a USA Today report, Ford's pay pales in comparison to the staggering sums commanded by the coaches he will have faced in the NIT Final Four: Florida's Billy Donovan ($1,389,173) and Ohio State's Thad Matta ($1,175,000).

While Ford never won a national championship as a player, he stands a chance to mint his career by adding an NIT title to his coaching résumé, which includes an Ohio Valley Conference title in 2005 during his fifth and final season at Eastern Kentucky, where he compiled a 61-80 record.

"I think it's a great opportunity for Travis and the team and they deserve it," Donovan said after UMass defeated his Gators, 78-66, in Tuesday night's semifinals. "The one thing about it is that today has nothing to do with tomorrow, and tomorrow has nothing to do with the next day. They'll have to go out and perform well. I hope Travis can go out there and that they can play the game of their lives, because I'm a big Travis Ford fan and I love him as a kid, as a coach, and as a person, and I hope they do very well."

To reinforce the notion of how hard he expected his team to play, Ford showed his players video of his playing days (1991-94) at Kentucky, where anything less than maximum effort landed you on the bench next to coach Rick Pitino.

"He's always talking to me a lot because I'm a point guard and he was a point guard, so he's on me constantly about how they played back in the day," UMass junior Chris Lowe said of Ford. "It's similar to how we play now: aggressive, all-out, shooting threes, and having fun playing basketball."

But did Ford's game leave any kind of impression?

Ford's competitive nature served him as a player, and has helped him bring the Minutemen to the threshold of the school's first NIT title.