Too soon to determine Paterno's legacy 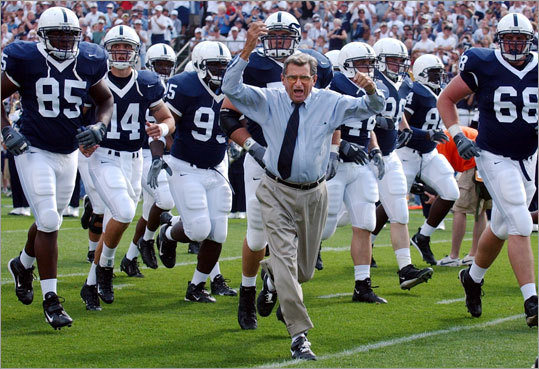 It was not supposed to end this way.

Joe Paterno should have retired in full glory, hailed as the ultimate combination of football acumen and humanitarianism. Greatest, Most Noble Big-Time College Coach of all-time? It should have been, “Hold all calls; we have a winner…and his name is JoPa!” That’s the way it should have been.

But now that he has been brought down by lung cancer at age 85 a mere 74 days after he was forced to resign from the coaching position he had held for 46 years, there is one central question: will he be remembered for the record total of 409 victories, plus the great philanthropy on behalf of Penn State, or will he be remembered for his actions, or, more specifically, his limited actions, in what is known as the Jerry Sandusky scandal?

Clearly, the image of Joe Paterno is somewhat different than it was three short months ago. Joe Paterno and his family had better hope that William Shakespeare was wrong when he put the following words in the mouth of Mark Antony.

“The evil that men do lives after them. The good is oft interred with their bones.” (Julius Cassar, Act 3, Scene II).

Joe Paterno did not personally perpetrate evil. What he’s being accused of in L’Aaffaire Sandusky is a failure to recognize evil. “I should have done more,” he said in the immediate aftermath of his dismissal. No one could possibly disagree.

We live in a talk show/TV pundit world where instant judgments are rendered. “I don’t know,” or “I’m not sure” are not permissible responses. No doubt people countless people have already come up with a verdict.

True historians recognize that in most matters time and perspective are needed before arriving at any firm conclusions. Right now, everyone is way too close to the action to think clearly. The Penn State adherents are adamant that Joe Paterno was horribly mistreated by the Penn State trustees and by many members of the media. The people appalled by the scope of the charges against Jerry Sandusky will want Joe Paterno held accountable in some way, even in death. They’re not particularly interested in the 409 wins and the philanthropy.

The impact of this one bespectacled Brooklynite, and Brown graduate, at that institution in State College, Pennsylvania, is beyond dispute. Before he succeeded Rip Engle as head coach in 1966, Penn State was nothing more than a solid C-plus/B-minus student in the world of college football. Engle had a couple of 9-2 seasons, but when you thought of national schools synonymous with winning football, you did not think of Penn State, and you would have won substantial money betting on the proposition that a Penn State coach would finish his career having won more big-time college football games than any coach in history.

And as two national championships materialized, and victories piled upon victories, the accompanying propaganda was that he was, ahem, "Doing It The Right Way,” which means that Penn State had an abnormally high graduation rate, his players stayed out of off-the field trouble, and, furthermore, that he took a lot of the money he was paid to coach football and gave it back to the university. Who couldn’t admire all that?

The Penn State football program under Joe Paterno prided itself on being a “family,” but as time went on it morphed into a full-fledged cult, which is a very different matter. Joe Paterno accumulated more and more power and he loved to exercise it, He became larger than the university, and anyone who denies this is simply being unrealistic.

He should have had enough sense to retire years ago. Knowing when to get off the stage is a vital piece of knowledge for powerful people to possess, but Joe Paterno was totally tone deaf. “What would I do?” he would say. “I don’t golf. I have no hobbies.” And exactly whose fault was that?

You know what he could done with his life, starting at age 70, or 75 at the latest? He could have taken a page from the Red Auerbach book and been Joe Paterno, lecturer, consultant, raconteur,the Grand Old Man of Football. It could have been a delightful full-time job. He coulda/shoulda/woulda been many miles from the Jerry Sandusky disaster.

And what of his involvement with the Jerry Sandusky disaster?

All I have is an educated guess. I’m guessing that the 75-year old Joe Paterno, good Catholic that he was, could not wrap his head around the idea of man-on-boy child molestation. I’m guessing he, like many people who never grasped the severity of the child abuse charges leveled against all those priests, regarded such activity as creepy, not criminal. I’m guessing he had absolutely no clue of the lifetime psychological damage molestation creates. Oh, sure we all know now. But who knew back then?

Here is where the abuse of power part comes in.For Joe Paterno, no matter what he said, was intent on protecting the brand he had created over more than four decades. You’re damn right, he did. The fact remains that at the time he was confronted with the Sandusky revelation, he should have been Head Football Coach Emeritus at Penn State.

Joe Paterno did great things at Penn State. But he grew crochety and arrogant, and when he stood on his lawn and said he, and he alone, would determine when he would retire from his job he was revealed as an out-of-touch despot. That, sadly, was our last public look at the man.

Can anyone doubt that he simply had no desire to live while being regarded as something less than a living saint? The Joe Paterno episode provides a clear cautionary tale for all coaches who are in danger of acquiring too much power.

Know when to say when. You will make no more important decision. Let Mark Antony’s words apply to the next guy, not you.