THIS STORY HAS BEEN FORMATTED FOR EASY PRINTING
COLLEGE FOOTBALL ROUNDUP 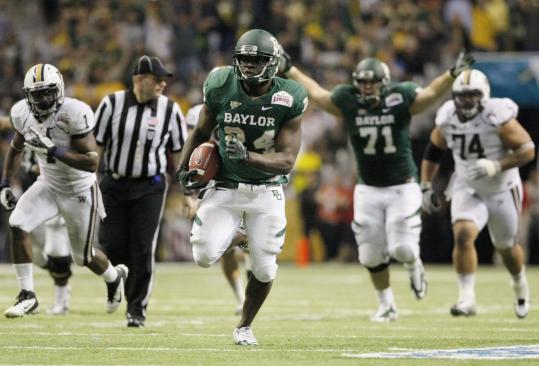 Heisman Trophy winner Robert Griffin III wasn’t dazzling - and didn’t need to be - as No. 15 Baylor pulled out a thrilling Alamo Bowl victory in the highest-scoring bowl game in history, beating Washington, 67-56, in a record-smashing shootout last night in San Antonio.

If this was RG3’s final showcase before jumping to the NFL, it was a gripping goodbye to watch. One of the nation’s most electrifying players was upstaged by an even more exciting game that shattered the previous record for points in regulation set in the 2001 GMAC Bowl.

Griffin had an unremarkable night, throwing just one touchdown pass and running for another. But Terrance Ganaway starred ably in his place, rushing for 200 yards and five touchdowns.

Griffin wasn’t the star, but a crowd overwhelmingly in favor of Baylor that was left breathless by five lead changes and three touchdown plays of 50 yards or longer still treated him like one.

The previous bowl record for a regulation game was 102 total points set in the 2001 GMAC Bowl between Marshall and East Carolina. That game went to double overtime and ended with a combined 125 points - which still stands as the overall bowl record.

Baylor and Washington (7-6) also set a bowl record for total offense in a game with 1,377 yards.

Washington quarterback Keith Price outplayed his Heisman counterpart, going 23 for 27 with 438 yards and four touchdowns. He also ran for another three scores.

Griffin was 24 of 33 for 295 yards - and his only touchdown throw came on the game’s opening drive.

Florida State 18, Notre Dame 14 - The Seminoles rallied from a 14-point, second-half deficit and used a pair of touchdown passes by E.J. Manuel and two field goals from Dustin Hopkins to slip past the Fighting Irish in the Champs Sports Bowl at Orlando, Fla.

The victory was FSU’s fourth straight bowl win. FSU receiver Rashad Greene, who caught one of Manuel’s touchdown passes, was named the MVP.

The No. 25 Seminoles started four freshmen on their offensive line and gave up five sacks, but FSU’s defense picked off Notre Dame quarterbacks Tommy Rees and Andrew Hendrix three times and also piled up four sacks.

Notre Dame shuffled between Rees and Hendrix throughout the game, but both struggled to get points inside the red zone.

After some stagnant offense on both sides in the first half, FSU trailed, 14-0, early in the third quarter before finding some momentum through the air.

The Seminoles closed the gap to 14-9 with an 18-yard touchdown pass from Manuel to Bert Reed to open the fourth quarter, but failed on their 2-point conversion attempt.

They took the lead just 1:32 later after Nigel Bradham intercepted a Hendrix pass inside the Notre Dame 20 to set up an 18-yard touchdown catch by Greene to make it 15-14 with just more than 13 minutes to play following another failed 2-point try.

Notre Dame punted on its next touch, but pinned FSU inside its own 5 and forced a quick three-and-out.

A poor punt by the Seminoles and a face mask penalty on the return gave the Irish the ball on the FSU 28 with 3:56 to play, but Rees was picked off in the end zone with 2:48 left and FSU was able to all but run out the remaining clock.

The University of Miami is giving back $83,000 it says it received “directly and indirectly’’ from Nevin Shapiro, the former Hurricanes booster and convicted Ponzi scheme architect whose claims of giving athletes and recruits extra benefits for nearly a decade sparked an NCAA investigation.

Florida State is extending coach Jimbo Fisher’s contract through the 2016 season. Fisher signed a five-year, $13.75 million contract in February after going 10-4 during the 2010 season, his first as head coach.